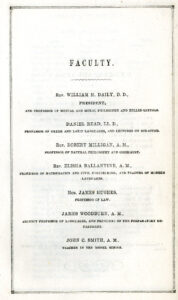 Milligan listed in the faculty in the 1853-54 Annual Report

For the past year, I have been transcribing the handwritten minutes of the Board of Trustees of Indiana University as they are prepared for online reading. Since the end of last year, I have been working through the first set of minutes that the archives possesses, the minutes from 1838-1859. While working in the minutes from 1852, I happened across a name that was very familiar to me: Professor Robert Milligan. I was excited to see this name, as my undergraduate institution, Milligan College in East Tennessee, was named for this very professor. While Milligan was not a professor at the nascent Indiana University for very long, he still made some interesting contributions to the University.

Robert Milligan was born 1814 in Ireland, but soon came with his family to the United States. He lived in Ohio, Pennsylvania, and Kentucky before graduating and then teaching at Washington College in Pennsylvania, where he eventually became president.

Resolution from the minutes to establish engineering

Minutes detailing the election of Milligan

On Wednesday, April 14, 1852, the Board of Trustees of Indiana University unanimously elected Robert Milligan to be the new Professor of Mathematics and Engineering and in an effort “to render the University more useful and more popular” passed the following resolution: “Theoretical and practical Engineering as connected with the Mathematical Department. The numerous public works now in process of construction, renders civil Engineering, a most important branch of University Education, and it cannot be doubted, that instruction by an able and accomplished Mathematician, in this important branch, together with practical illustrations in the field, would meet one of the present demand of public education in Indiana, and add to new class of valuable students to the University.”

Although courses had been offered in civil engineering for nearly a decade, 1853 marked the year when it became part of the Mathematics and Chemistry departments where it remained until 1858. Civil Engineering then disappeared until the 1870s, when it returned as part of a department that also included military science. The return, however, was short lived, probably thanks in part to the establishment of the new Purdue University in Lafayette. 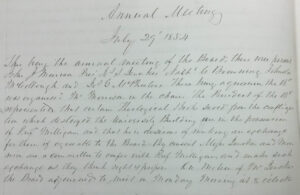 Besides involvement in the fledgling engineering department, Milligan made his mark on the University in other ways. In 1853, the Trustees appointed Milligan to the position of chair of Natural Science and superintendent of the University. By August 3 of that year, however, Milligan had offered his resignation. The Trustees countered by offering him the position of chair of Natural Philosophy and Chemistry, which Milligan accepted. After the First College Building was destroyed by a devastating fire in 1854, the Trustees minutes of April 2, 1855 note that Milligan made a donation to help rebuild the University.

On July 31, 1854, again Milligan resigned. The minutes point to health reasons forcing the Milligan family to leave. Indeed, Milligan was a sickly man, having chronic effects of rheumatic fever. Milligan would go on to teach at Bethany College in what is now West Virginia and become president of what is now Transylvania University in Kentucky (then called Kentucky University). After a few years as president, Milligan gave up the position and taught in the university’s seminary. Milligan died in 1884.