This month marks the 100th anniversary of the opening of Margaret Sanger’s family planning and birth control clinic, the forerunner to Planned Parenthood. Margaret Sanger, a nurse and birth-control activist from Brooklyn, New York opened the clinic on October 16, 1916 in pursuit of establishing greater reproductive freedoms for women. The clinic was shut down ten days later and Sanger was sentenced to 30 days in a workhouse as a result.

Many individuals at IU also fought for women’s reproductive rights. But no more so perhaps than the members of IU’s Women’s Liberation Movement. On August 3, 2013 archivist Dina Kellams sat down with alumnae Ruth Mahaney (’70) and Nancy Brand (’73) to gather stories about their experiences while they were at IU. What she got was a detailed account describing the struggles that they and others went through to further women’s rights on campus.

At the beginning of the Women’s Liberation Movement here at IU, women formed support groups on campus to discuss issues concerning women’s rights. During one discussion, however, they soon found that one of the bigger issues that the women faced was finding ways to have medically safe abortions:

Ruth recalled a particularly horrifying experience a friend had with an abortionist, saying that the person meant to perform the procedure stated that they had to have sex before he would complete the intended operation. Upon hearing this, the woman fled the clinic and ended up giving up on an abortion all together. To combat these problems, the women formed what would later become the Midwest Abortion Counseling Service.

The ladies used the Women’s Center (described by Ruth in the interview as “the Women’s Liberation House”) as a base of operations to conduct their work. The house’s phone number, under Ruth’s name no less, became the number for people to contact for these services.

But even with counseling, women experienced many difficulties while flying under the radar to have these abortions:

When asked if they were scared about potential repercussions in helping these women, the ladies replied with the following statement: 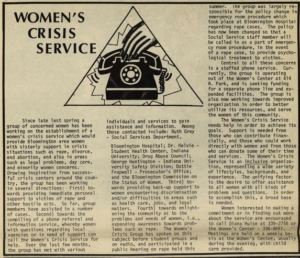 After abortions were legalized in 1973, IU’s Women’s Liberation Movement established a Women’s Crisis Service whose goal, according to the Women’s Handbook Spring ’75, was “to provide Bloomington area women with sisterly support in crisis situations such as rape, divorce, and abortion, and also in areas such as legal problems, day care, and minority women concerns.” The Crisis Service operated out of the Women’s Center but, according to the advertisement, was “seeking funding for a separate phone line and expanded facilities.” The women were eventually able to establish a rape crisis center which would go on to become Bloomington’s Middle Way House. 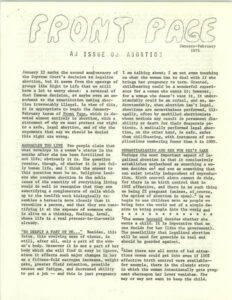 For more information on abortion counseling and how attitudes changed after the 1973 ruling see Nancy’s interview with The Front Page (IU’s feminist newsletter published during the 1970s) located here. The interview is contained within the January-February 1975 issue on pages 7-9.