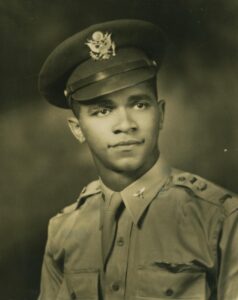 The archives are home to the Indiana University War Service Register records that dates from 1920-1946. The collection, created by the Alumni Office, includes records and correspondences relating to the men and women of the university who served in World War II and was used to compile the original Golden Book. The records tell us how some students juggled their education, marriages, and careers with their promise to Uncle Sam, postponing everything for the sake of serving their country. Charles DeBow was not unique in that aspect; his father pushed for Charles to pursue a career in medicine. But the important milestone he set for African Americans all over the country is what makes his record a fascinating find. 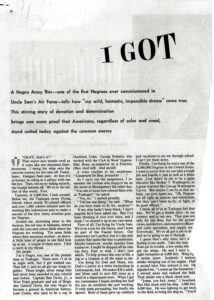 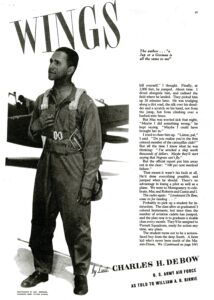 DeBow’s file includes his correspondence with the alumni office, a couple of newspaper clippings, and an article featured in the August 1942 edition of The American Magazine– a periodical that sometimes published articles about the lives of interesting American people–narrated by DeBow himself. In it, he explains his struggle with the race boundaries found both in life and the U.S. army. DeBow expressed that his dream of flying, although unrealistic, developed at a young age.

“…Negroes didn’t become aviators. They became elevator operators, and janitors, and porters like Dad. I knew all that with my head, but I kept my dreams in my heart.”

Putting those dreams aside, DeBow enrolled at IU after high school. As stated previously, his father insisted that he study medicine– a profession that could allow anyone, white or black, to make a good living. But DeBow was convinced that he would never be successful in the medical profession, and so he transferred to the Hampton Institute in Virginia to study business. That’s where he first learned to fly. The government selected twenty African Americans (out of around three hundred applicants) to learn the art of aviation. Afflicted by what DeBow referred to as “the flying bug,” he elected to drop out of college and eventually enlisted into the United States Army after months of working various jobs to save money. The glorious day had finally arrived when the War Department announced their acceptance of applications from African-Americans interested in the Air Force. It was finally a triumphant “yes” after years of hearing that same phrase “no Negroes” in the theater, in his career–in nearly every aspect of DeBow’s life. 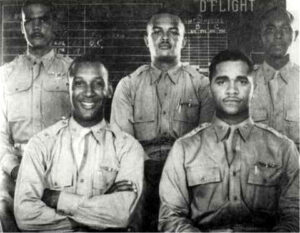 The first five members of the graduating class at the Tuskegee air school. Charles DeBow is featured in the bottom right.

Charles DeBow became one of five members of the first graduating class of the Tuskegee army flying school in Alabama on March 6th, 1942. The other men in his class included: Ben Davis Jr., graduate of West Point and the son of Benjamin Davis, the first African-American to become a general in the U.S. Air Force; Lem Curtis, policeman from Hartford Connecticut; George Roberts of West Virginia, and Mac Ross of Dayton, Ohio. The commanding general of the South Eastern Air Force Center, General George E. Stratemeyer, delivered a speech for the ceremony. DeBow’s parents looked on proudly as winged pins were placed on each graduate’s chest. By the end of his narration in the American Magazine article, DeBow was still in training at Tuskegee. He had not yet seen the war front, but he was ready.

“Personally– just personally– I hope I get a chance to tangle with a Jap or a Nazi. Soon. I’d like to be the first Negro to bag one. I’ve waited a long time.”

That’s where the article leaves us. The Alumni Office at Indiana University sent DeBow’s father a congratulatory letter after the publication of this article and shared that they planned to release a feature story for him in the Alumni Magazine. But what happened after?

According to his obituary, which was published in the Indianapolis Star in 1986, DeBow commanded the 301st Fighter Squadron, flew 52 combat missions in the European Theater, and flew support missio 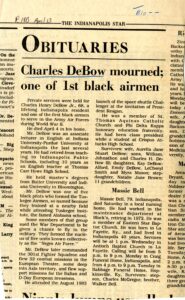 ns for the Italian and D-Day invasions. His military career proved impressive and extensive, and his “wild, fantastic, impossible” dream had come true.

DeBow returned to Indiana University after serving in the Air Force and received a Master’s degree. Additionally, he
received a Master’s from Butler University, taught English for ten years at Thomas Carr Howe High School in Indianapolis, and became an associate lecturer in English at IUPUI throughout the remaining years before his death on April 4th, 1986.

If anything, the story of Charles DeBow and the other Tuskegee Airmen is one of true American patriotism: overcoming hardships and fighting boundaries in order to recognize and achieve one’s dreams. DeBow certainly broke the threshold the day they pinned on those golden wings– not just within the army, but for the entire basis of racial interactions in the United States.