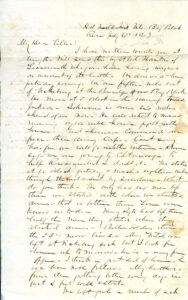 Letter from Gresham addressed to his wife

As you walk across campus, you may notice that most buildings have names. Some names may be familiar or well-known, but others may not particularly stand out. However, the people behind some of those names can have fascinating stories. One such person is Walter Q. Gresham. Gresham, an Indiana native, was born in 1833. He attended Indiana University Prep for a year and then became a student of law. By 1854, he had been admitted to the Bar and was on his way to an illustrious career. He briefly served his home state as a member of the Indiana General Assembly; Gresham then went on to serve his country during the Civil War, rising through the ranks to become a brigadier-general. He also organized the 53rd Indiana Infantry and was wounded at Atlanta during the war, ending his time of service. 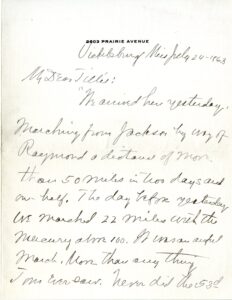 During this time, he sent letters to his wife, Matilda, which can be seen in the picture above and the picture to the left. The letter pictured above includes details of his recent experiences in the war, but it also includes a touching note to his wife and children:

“Don’t be uneasy if you don’t hear from me regularly for some time for I will have very few opportunities to write. Write often & continue to direct your letters as heretofore. I think of you often, yes every hour in the day I think of my dear wife & children. It is hard to be thus separated but a man must do his duty to his country in a time like this. God bless you & the children & take care of you is my purpose. I must lay down & take a nap for I will be up at 3 o’clock in the morning. Good night.

In the copy of the letter transcribed by his son Otto, Gresham writes from Vicksburg in July of 1963 and describes how his regiment has marched over fifty miles over only a couple days. He takes great pride in the Indiana 53rd, saying, “Never did the 53d show its superiority over other regiments as it has on this March.”

After the war, Gresham’s career rose to a national level. From 1869 to 1883, Gresham served as a US District Judge. Indiana University then conferred an honorary LL.D. upon him in 1883. President Arthur then appointed Gresham as Postmaster-general, followed by appointment as Secretary of the Treasury; however, he was not in these positions very long. In 1884, he became a judge on the U.S. Circuit Court and served in this position until 1893. Gresham was a candidate for the Republican presidential ticket in 1888, although he did not receive the nomination. In 1893, he served as Secretary of State for President Cleveland. Gresham did not serve in this position for a lengthy time, as he died in 1895.

Gresham’s legacy lived on, however, as his family donated his sword from the war to Indiana University in 1911. Sadly, IU no longer has Gresham’s sword, but his legacy lives on through the dining hall with his name on the Bloomington campus. A large collection of Gresham’s papers can also be found at the Library of Congress. 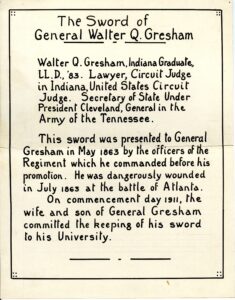