Humor has always been a popular approach when discussing collegiate life.  It has a way of fearlessly tackling the array of social and academic topics that confront college students like dating, partying, professors, Greek life, and sports.  Indiana University has a long history of student-published satire/humor magazines such as the Vagabond of the 1920s, The Bored Walk of the 1930s, and The Date from 1946-1947. Another was the Crimson Bull.

In 1947, the IU chapter of the professional journalism society Sigma Delta Chi launched the Crimson Bull, adopting the name of a former IU student humor publication that was issued in the early 1920s. In post-WWII America, the editors of The Crimson Bull found it necessary to stir backlash against the mainstream propaganda distributed by University officials; they courted censorship, played with taboos, and encouraged criticism along with, of course, laughter, providing a unique yet undeniably relatable glance at IU student life. 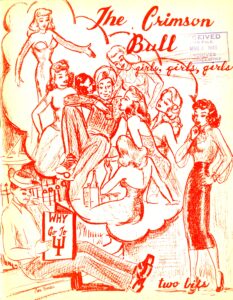 The IU Archives holds over 30 issues from the racy humor magazine dating from 1947-1956.  During its publication The Crimson Bull released 6 or 8 issues a year, many of which were special issues ranging from the eminent doom of graduation to “the birds and the bees.”  While many of these special issues targeted the typical collegiate themes, the November issues however were often reserved for a distinctly IU problem – Purdue.

Out of all of IU’s Big Ten competitors, our greatest rivalry is with our in-state neighbor, Purdue.  IU and Purdue have been in-state rivals for over a century, and although bitter opponents, the universities have tried to keep it in good spirits. The two universities have constantly fought over who holds the title of the state school, and the editors of The Crimson Bull were quick to inform readers on IU’s clear superiority. The publication dedicated at least three known issues to berating their northern neighbor university, be it through mock exposés, comic illustrations, or simply flaunting snapshots of 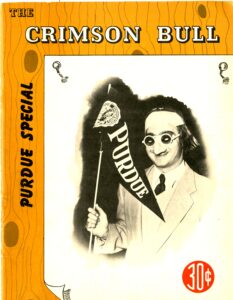 The magazine often refers to Purdue as COW College, stereotyped as the agriculture school that uses its engineering program as a front to disguised its crude, crumbling infrastructure.  Purdue is often framed as a true architectural horror with a dismal 6:1 male to female student ratio and embarrassingly subpar literacy standards. These magazine issues include articles set from the perspective of an “undercover” student journalist who bravely ventured to probe the Purdue campus along with interviews from phony “former” Purdue students who had supposedly escaped and transferred to IU, recounting many horrors.  The flagrantly false allegations made towards Purdue would have surely gotten a laugh out of any IU student – a scoff and maybe even a chuckle from a Purdue student. 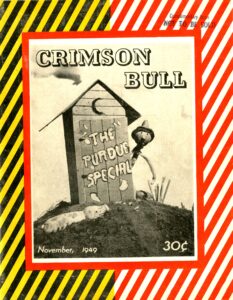 “The Purdue Special” of November 1949 contains a particularly interesting article titled “Our Bucket” that investigates the origin and other historical moments from past Oaken Bucket Games (You can read more about the origins and history of the Old Oaken Bucket in this post from last week.)  The competition began in 1925 after the first Oaken Bucket Game ended in a deadlock tie, forcing the trophy to be shared between the two campuses – Purdue having the trophy for the first six months, IU for the latter.

As an IU alumnus myself, I especially enjoyed reading about the particularly rattling upset of 1930, where the IU underdogs defeated the Boilermakers at home.  It is rumored that the upset was so unexpected that the officials had only bothered to print a “P” link that year. After returning to Bloomington, accompanied by a band of celebration, the IU football team and fans were stunned to realize that the Old Oaken Bucket trophy had been stolen en route by a band of disgruntled Purdue students disguised in the IU cream and crimson.  An investigation pursued for the missing trophy and ten days later the Old Oaken Bucket was discovered unharmed on a loading platform in the middle of Lafayette.  The theft caused quite a scandal and further solidified a rivalry that to this day continues to divide Indiana homes.

What I enjoy most about The Crimson Bull is that although these magazines were written over sixty-five years ago, as an IU alum, one cannot help but appreciate the long standing tradition of the two universities’ love-hate relationship.

Contact the IU Archives to see the full collection.