Margaret Albersmeyer Werling graduated with a bachelor’s in Education in 1953, and, according to her personal scrapbook, attended every sporting event, theater show, and dance that she possibly could between 1951 and 1953. While perusing her scrapbook, I discovered many interesting IU student traditions including: the decorating of fraternities for football games, the Law-Med School Boress, the Arbutus Queen Contest, and the Fall Carnival Parade. 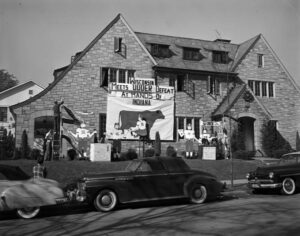 Margaret was an avid attendee of athletic events and saved programs from basketball games, track and field events, and football games. She must have truly enjoyed attending the Old Oaken Bucket games between IU and Purdue because she saved tickets and programs from 1951 and 1952. Although she did get to see IU triumph in football, she watched the Hoosiers clinch the 1953 NCAA Basketball Championship over Kansas and attended campus celebrations.

I was most intrigued by Margaret’s impressive dance card collection. Dance cards initially became popular in Vienna, Austria in the 19th century and their usage peaked in the early 20th century.  Dance cards were typically small, decorated booklets worn on a woman’s wrist or attached to her dress with a cord. Men carried pencils and wrote their names on lines next to the name of dances in the booklet. 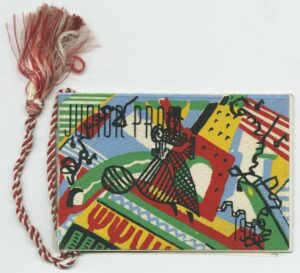 Dance cards remained in fashion until the 1960s when dances became less formal affairs.  Common phrases such as “pencil me in,” “my dance card is full,” and “save the last dance for me” are all tied to the dance card culture. Many of Margaret’s dance cards have a decorated cover that reflects the theme of the dance, lists of committee members who sponsored the dance, and details about the entertainment.

Dances were all the rage at IU in the 1950s.  There were plenty of formal and informal dances to keep students busy.  Students could attend the Freshman Frolic, the Freshman Tyronian, the Sophomore Cotillion, the Junior Prom, the annual Blanket Hop hosted by Sigma Delta Chi (the honorary journalistic fraternity), the Senior Siwash, and many more! 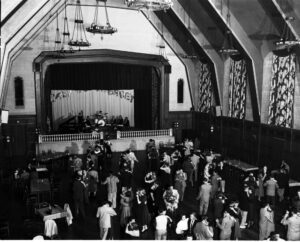 A dance that became an annual tradition on campus was the Wellhouse Waltz. The first iteration of this dance was held in 1944 at the Alumni Hall of the Union. Each year, male attendees selected a freshman woman to become “Miss Campus Coed.” It was said that in order for any IU woman to become a “true coed,” her date must take her to the Well House after the Wellhouse Waltz and then kiss her for the full twelve strokes at midnight.

The Junior Prom was the most formal dance of the season and was held in the Men’s Gymnasium with a dedicated theme.  The festivities could last until two o’clock in the morning. Students must have truly enjoyed these dances because they would “end only by force of the 12:30 curfew when dates unwillingly part” (1953 Indiana Arbutus, p. 138). The theme of Margaret’s 1953 prom was “A Star Danced.” 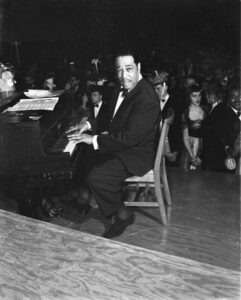 Duke Ellington at the 1952 Dames’ Ball

Well-known artists played at many IU dances.  In 1952, Duke Ellington played at the Dames’ Ball, a dance where women escorted the men.  According to the 1952 Arbutus, “The men reaped the benefits of inverted chivalry that evening as they were called for, paid for, and encumbered with original – and uninhibited – corsages.”  At the end of the night, one man was chosen to be “King of the Dames.”

Students voted on a Queen at both formal and informal dances. At the 1952 Sweater Hop, the Sweater Queen was selected out of twenty-nine candidates. According to the 1953 Arbutus, “each housing unit had the privilege of selecting their candidate for the competition. The list was narrowed down to five girls before the dance by several judges picked from campus dignitaries. The sponsoring housing unit then put on an all-out campus campaign.” Couples attending the dance cast their vote and the winner was presented with a cashmere sweater and roses.

Margaret must have loved her time dancing the night away as an undergraduate at Indiana University because she came back to earn a master’s degree in education eight years later. If you would like to learn more about dances at IU, look at Margaret Werling’s scrapbook, or learn about other IU student traditions, contact the IU Archives.