Throughout IU’s history, there have been countless examples of greatness and outstanding achievement by its African American students. It is important to remember those students who, despite being faced with overwhelming social challenges due to their race, made ripples through academia that have lasted for years. For this year’s Black History Month, we remember one of those students whose accomplishments made it possible for others to strive towards the same goal: Elbert F. Cox. Cox was the first African American in the country, and thought to be the first Black person in the entire world, to receive his PhD in mathematics, but not before receiving his undergraduate degree from IU. 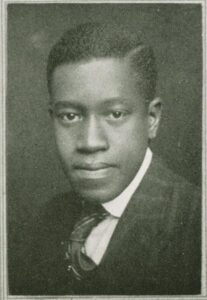 Cox was born on December 5th, 1895 in Evansville, Indiana. Evansville, like a majority of the towns at the time, had a segregated school system that saw African American students receiving an inadequate, underfunded education. But Evansville may have been even more racially divided than many of the other towns in Indiana, and the tensions between black and white citizens would come to a violent head more than once during Cox’s lifetime. A four-day race riot in 1903 occurred when a mob of white citizens stormed the county jail after the murder of a white policeman, which resulted in 12 deaths and could only be stopped when the Indiana governor called in a militia of 300 men to subdue it. Later, in 1920, the Ku Klux Klan would make its Indiana headquarters in Evansville.

Still, Cox’s family was among those who did not flee the city after the riot in 1903. They lived in a racially mixed neighborhood called Baptistown, where a majority of African Americans lived in Evansville at the time. Despite the adversity they faced from the white community, Cox had positive role models in Evansville. He could look up to the black teachers in his school, who promoted literacy and education. It is also possible that his father (one of his most essential inspirations) was a key reason for them to remain there after the riot, as he served as principal and educator for schools in Evansville and would do so for up to 50 years.

Indiana University and the Euclidean Circle

From Evansville, Cox made his journey to Indiana University in 1913 to study physics and mathematics. The math department at IU had several noteworthy professors at the time who would shape his education and help with his later academic endeavors. Some of his most influential educators were mathematics instructors/professors Cora Hennel, Schuyler Davisson, and Tobias Dantzig, who were all involved in some way with IU’s Euclidean Circle. 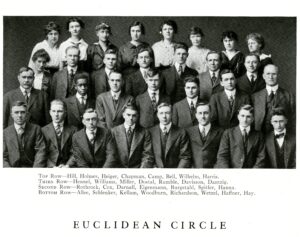 The Euclidean Circle photo from the 1916 Arbutus. Cox, Hennel, Davisson, and Dantzig are all pictured here.

The purpose of the Euclidean Circle was to organize the faculty and students within the mathematics department, discuss mathematical questions, and share information. They initiated Cox on March 15th, 1915 as the first African American student to the group.

Cox also made his place within other organizations such as the Physics Club, where he acted as secretary in his senior year. That year his brother, Alvalon, also joined him in the club. The African American fraternity, Kappa Alpha Psi, accepted him in 1915. He truly had an abundance of positive influences here at IU—but he, and the other African American students, still faced unfair treatment in different aspects of their education. His transcripts would read “colored student” across the top. He would be listed at the end of the graduates in the Arbutus in 1917, along with the other three African American graduates. And finally, he would be denied membership in the honor society Phi Beta Kappa despite his outstanding academic achievements. It is possible that they denied him purely because of his race. That being said, Cox (understandably) may have had mixed feelings about IU by the time he left.

Cox spent some of his time after IU as a math and physics teacher in the segregated schools of Henderson, Kentucky. In a letter to IU President William Lowe Bryan, he revealed that he had been inducted into military service and requested a letter of recommendation. This service would take him to Des Moines, Iowa and France for around nine months. 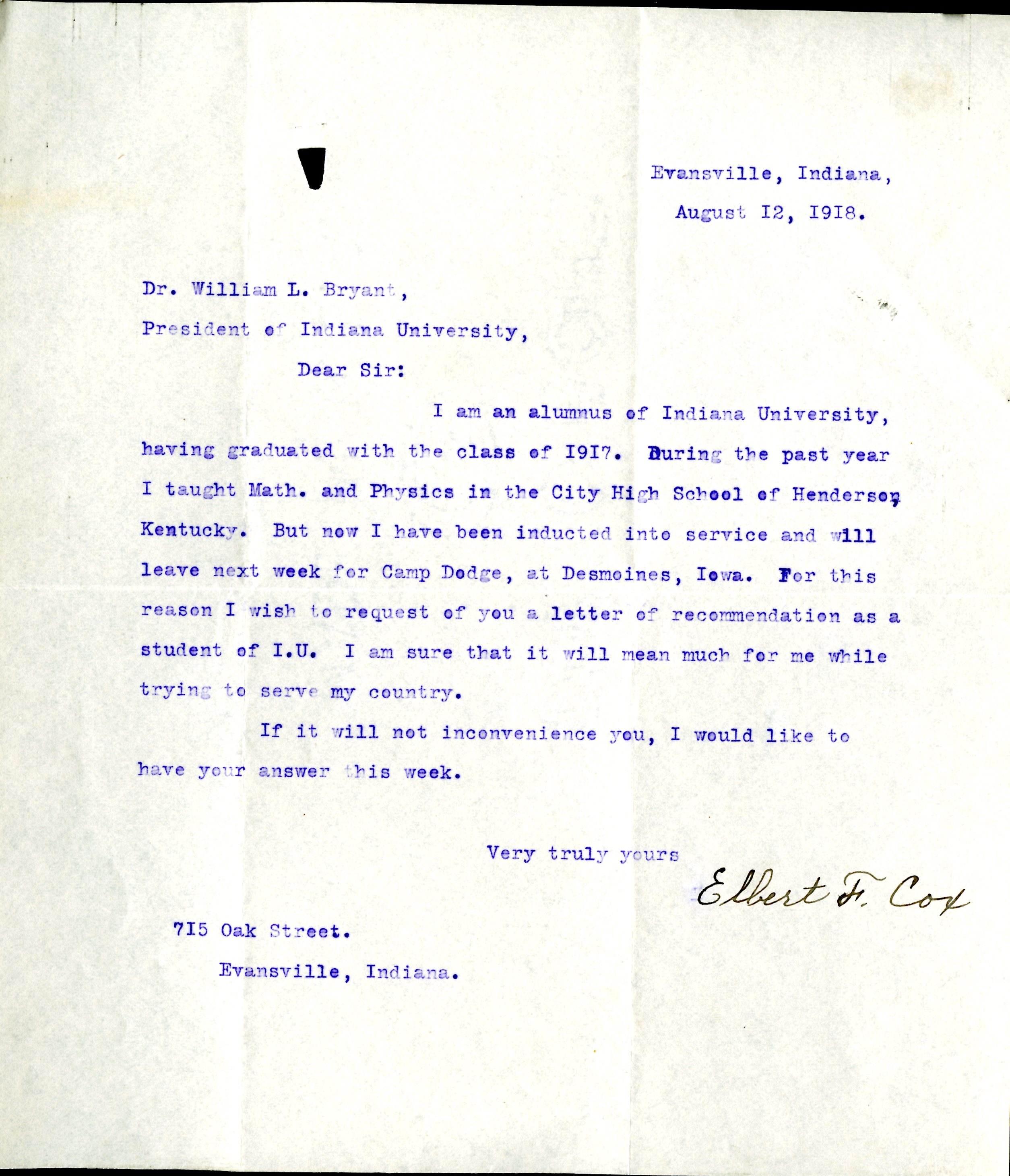 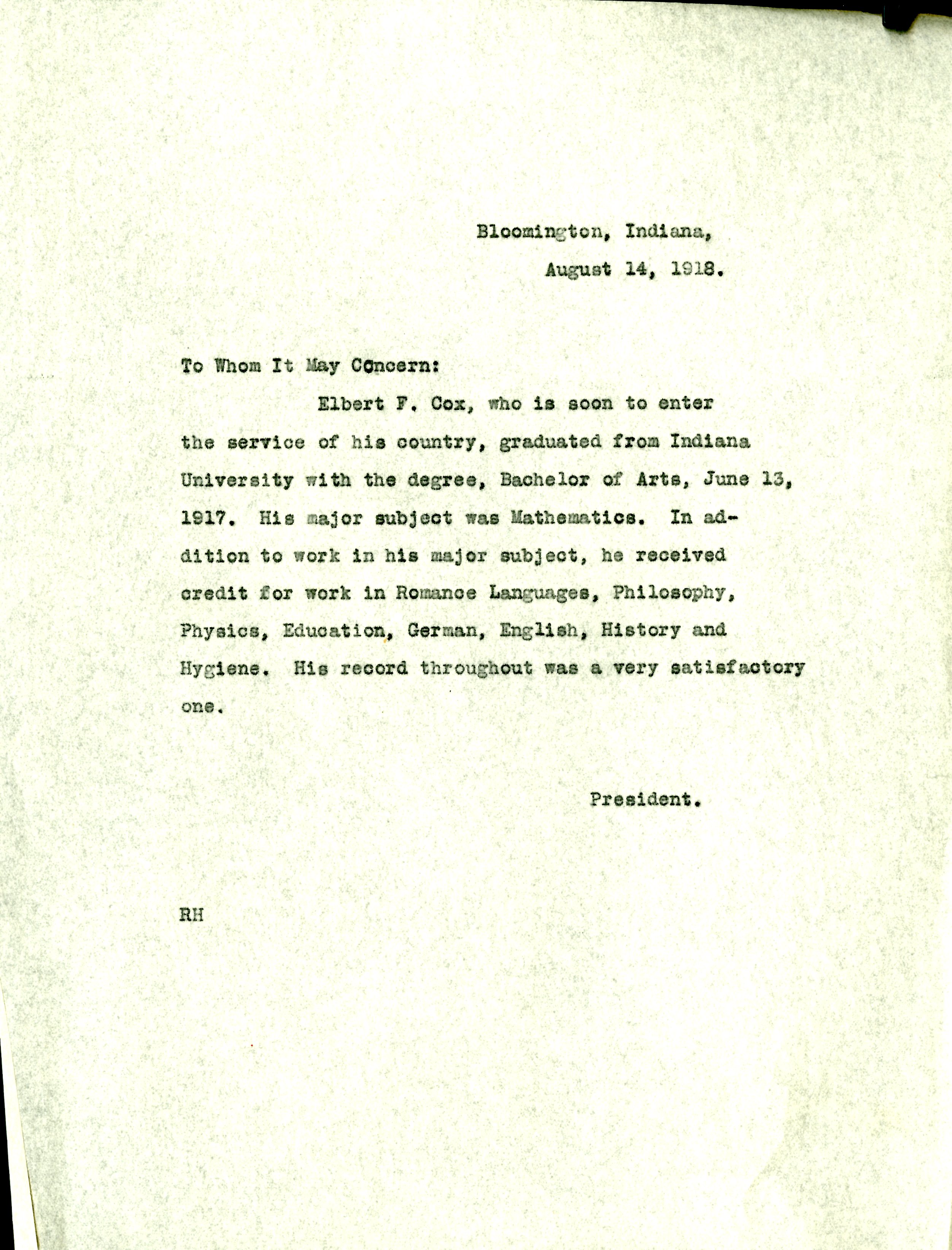 He later told his sons that he enjoyed being in the military and serving his country.

From there, he went to Shaw University in North Carolina for three years as a professor of the sciences and eventually became the head of the Department of Natural Science. However, by 1921, he was ready to further his education, and began the application process for a doctoral program at Cornell University.

Two of those professors from IU who had guided him during his time as an undergrad were happy to provide him with letters of recommendation during his application process. Davisson wrote in his letter, “[Cox] surpasses any colored man I have known as a student in mathematics.” Dantzig wrote two letters, worried that Cox would have “certain difficulties…because of the fact that he is of the colored race,” but that Cox would “develop into a man of whom the American mathematical world may be justly proud.” With these recommendations, Cox was able to gain acceptance after another candidate dropped from the competition.

The founder and the first president of Cornell University made sure that Cornell would be a perfect fit for Cox. Ezra Cornell (1807-1874) founded the university with hopes that it would provide equal opportunities for all who wished to be educated, and greatly opposed the practice of slavery. Andrew Dickson White (1832-1918), the first president of Cornell, promoted the admittance of both women and people of color into his university. 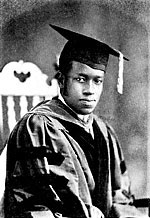 Cox was granted his PhD degree on September 26th, 1925. He completed a dissertation, which he published in the Tohoku Mathematical Journal in Sendai, Japan (after being declined by publishers in England and Germany) nine years after his graduation. One of his professors suggested publishing abroad to help legitimize his position as the first Black person in the world to receive his PhD in mathematics.

Cox didn’t receive as much recognition during his life as he did after he passed away in 1969, but he was the first African American to be admitted into the American Mathematical Society. He worked as a professor at West Virginia State College (which was then an all-black institution) and then later Howard University in Washington D.C. Unfortunately, many scholars and professors refused to recognize his thesis as legitimate.

Regardless, he was said to be a popular professor who enjoyed his career. In 1954, he became the head of the mathematics department at Howard University. For many students, he would have acted as that same role model that his black teachers in Evansville were to him half a century earlier. After his death, he gained recognition as an African American pioneer of mathematics, and to this day is still thanked for the boundaries that he broke.