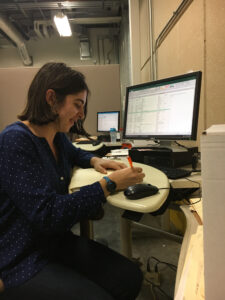 Role: Sophia assists with the Modern Political Papers collection, where she helps to inventory and organize the papers of the Richard Lugar collection (see here for an inventory of the Lugar Legislative Activity Files, 1977-2010). In the fall of 2016, she also worked as an encoder with the IU Board of Trustees and Bloomington Faculty Council minutes.

Educational Background: B.A. in Spanish from University of Colorado–Boulder with a minor in History; Current MLS student at IU

How she got here:  Before attending IU, Sophia completed an internship with the Stephen H. Hart Library and Research Center at the History Colorado Center in Denver. Her internship involved doing a research survey of the library’s Research Services Inc. collection. She identified the subjects of the records, which covered a variety of subjects such as education surveys and political polls. Then, she compiled all of this information into an Excel spreadsheet to create an informal finding aid.

She was interested in working at the IU Archives to gain more first-hand experience with archival materials, and try to learn about as many different activities involved in archives as possible. She also wanted to see how a university archives operates to understand how it differs from other archival institutions.

Projects: Sophia used TEI to encode the historical minutes of the Board of Trustees and make them available online. She worked her way through the early 1900s. She also encoded the Bloomington Faculty Council minutes from the past two years.

Favorite experience in the IU Archives: Sophia enjoys being able to work with such a wide variety of material types, from photos, to press clippings, to memorabilia.

What she’s learned from working here: She’s learned more about some of the major figures in IU history, such as David Starr Jordan and Daniel Kirkwood. She says it’s interesting to recognize names from buildings and streets that she sees every day, and to find out who they were named for.