As part of China Remixed, a campus-wide initiative to celebrate Chinese culture, the Indiana University Archives is celebrating the long history of Chinese students at IU with a series of blog posts and an exhibit in the lobby of the Wells Library. 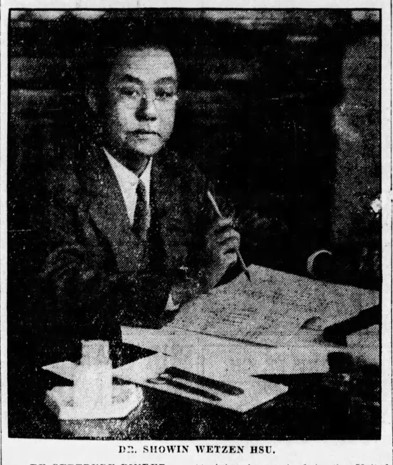 Showin Wetzen Hsu was the first Chinese student to graduate from Indiana University, earning a Bachelor’s Degree in History in 1909. Hsu came to the US in 1905 and studied at the University of California until the 1906 San Francisco earthquake and fire compelled university officials to end the academic year early. He transferred to the University of Illinois, where he stayed for 2 years, but decided to continue his studies IU in 1908 to specialize in Political Science, International Law, and Diplomacy under professors he admired. 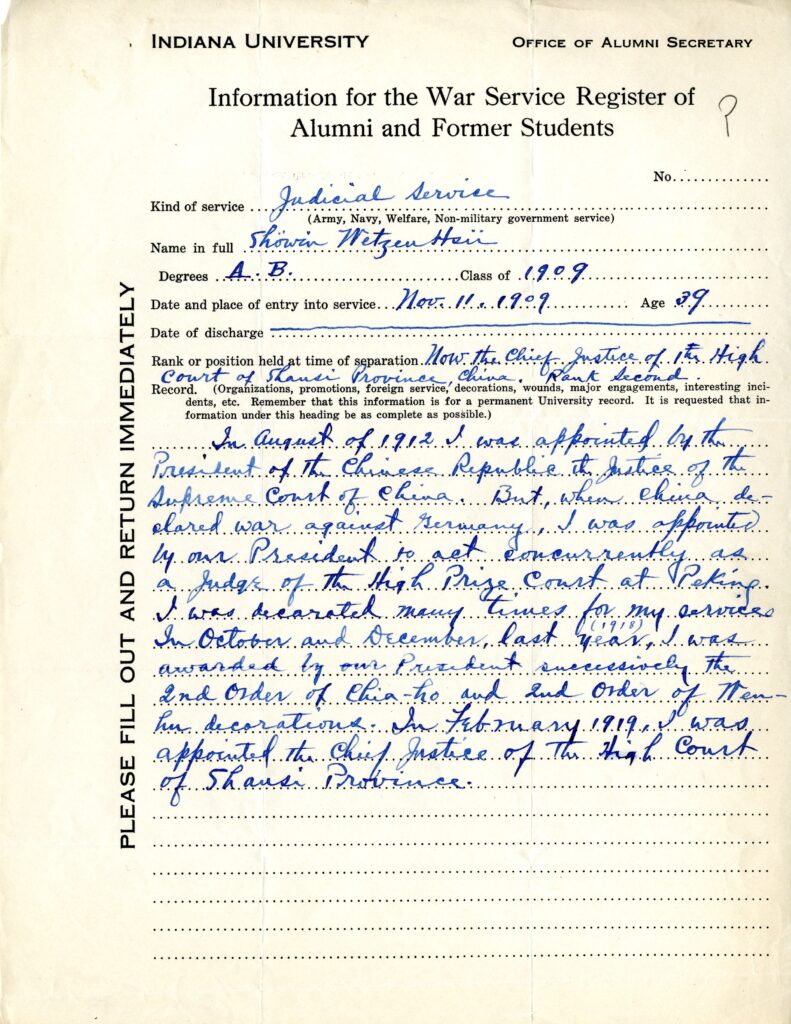 Shortly after graduation, in 1909, Hsu was recalled to China to serve as a law compiler in the Councilor’s department. Hsu rose through the ranks of the Chinese government quickly between 1911 and 1930. Hsu earned a master’s degree in 1911 and was appointed secretary of the Ministry of Education.  In 1912, Hsu was involved in transitioning the Chinese government from an imperial dynasty to a republic after the fall of the Qing Dynasty, a group that held power for more than 250 years. In 1912, the president of the newly established Republic of China appointed Hsu to serve as a justice of the Supreme Court of China. Hsu served in many high-level governmental and judicial capacities during his long career. 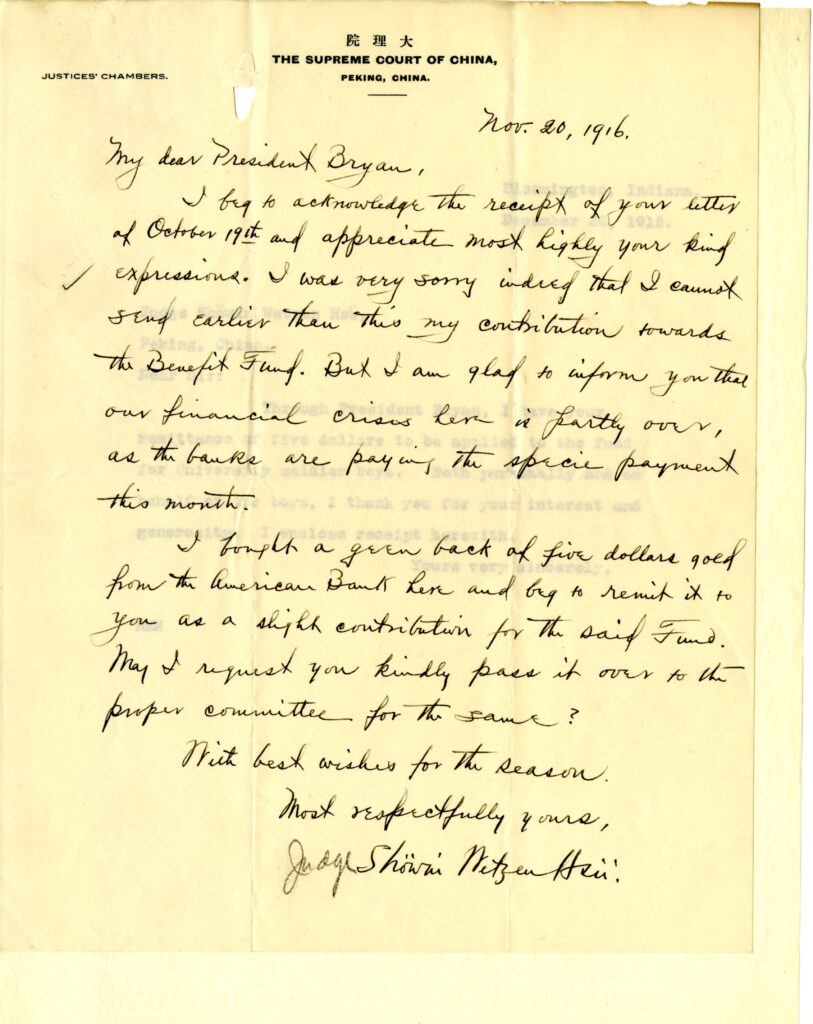 Letter from Showin Wetzen Hsu to President William Lowe Bryan, November 20, 1916 written on stationary from the Supreme Court of China

Hsu fondly remembered his time at IU even after his return to China. He corresponded with President William Lowe Bryan, donated money to IU causes, and frequently communicated with the IU Alumni Office. In October 1909, Hsu wrote a letter to William Lowe Bryan stating, “For the last whole academic year, I enjoyed my work in your university very much. I have been always proud of being the first Chinese graduate in Indiana and in the near future if I should be able enough to do any thing for my country is of course all due to your great supervision of our alma mater.” In January 1916, Hsu wrote to the Alumni Office to say that, although there were not enough IU graduates in Peking to hold a Foundation Day reunion, his thoughts were with his alma mater. 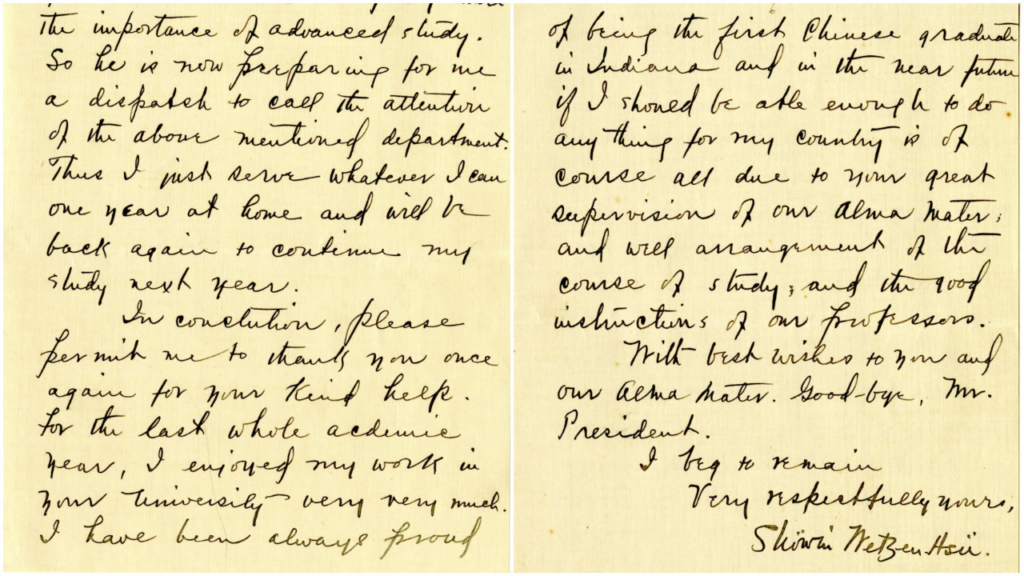 Pages four and five of letter from Showin Wetzen Hsu to IU President William Lowe Bryan, October 12, 1909: “I have been  always proud of being the first Chinese graduate in Indiana.”

Feel free to contact the Indiana University Archives if you would like to learn more about the history of Chinese students at IU.