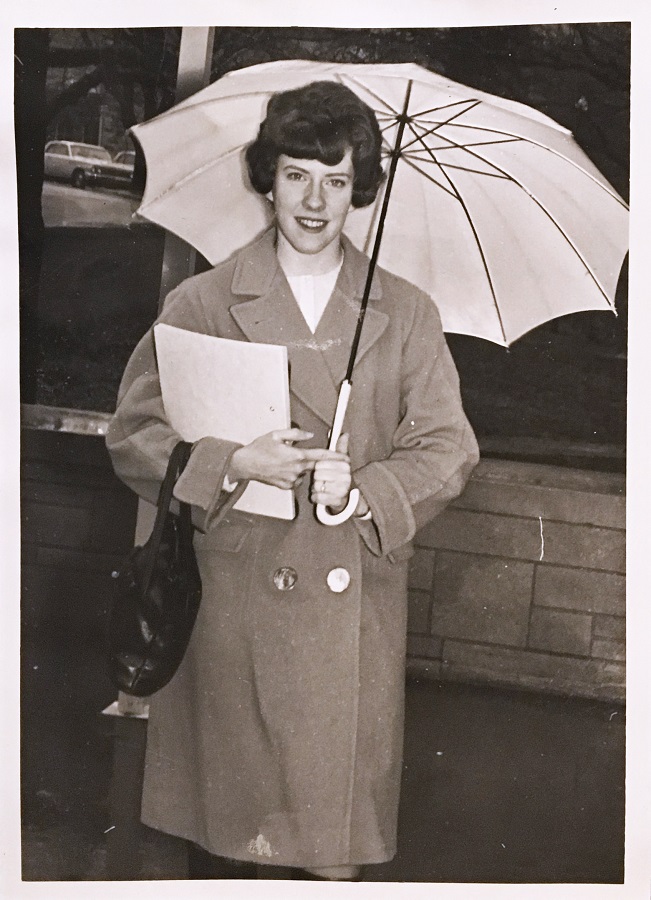 Kathleen Cavanaugh as an undergraduate student at Indiana University, circa 1964. C617 Box 3.

Over the years, the Indiana University Archives has steadily been acquiring an impressive assortment of photo albums and scrapbooks (see Catherine Ruby Force’s scrapbook, 1915-1920; the Margaret Werling scrapbook 1951-1953; and the Delmus E. Aldridge wrestling scrapbook 1929-1979, just to name a few!)

Scrapbooks and other handmade memory books are a valuable part of our collections, especially when they are created by students to document their experiences at Indiana University at various points in the University’s history. We are happy to share one of our most recent acquisitions, the Kathleen Cavanaugh scrapbooks 1960-1965 (C617), as a testament to the scrapbook as a fun, creative, and uniquely personal document of the student experience at IU!

Kathleen Cavanaugh (1942-2016) was born on November 9, 1942 in Indianapolis, Indiana to Martha and Harry Cavanaugh of Salem, Indiana. After graduating from Salem High School, Cavanaugh attended Indiana University Bloomington as an undergraduate student from 1960-1964, where she earned her bachelor’s degree in Zoology. During her time as an undergraduate, she was a very active member of the Gamma Phi Beta sorority, continuing to hold several leadership roles in the sorority even after she graduated. An enthusiastic participant in campus life, she was also a member of the Association for Women Students and the Young Women’s Christian Association. Cavanaugh later re-enrolled at Indiana University as a graduate student, earning her M.A. in Biology in 1970. 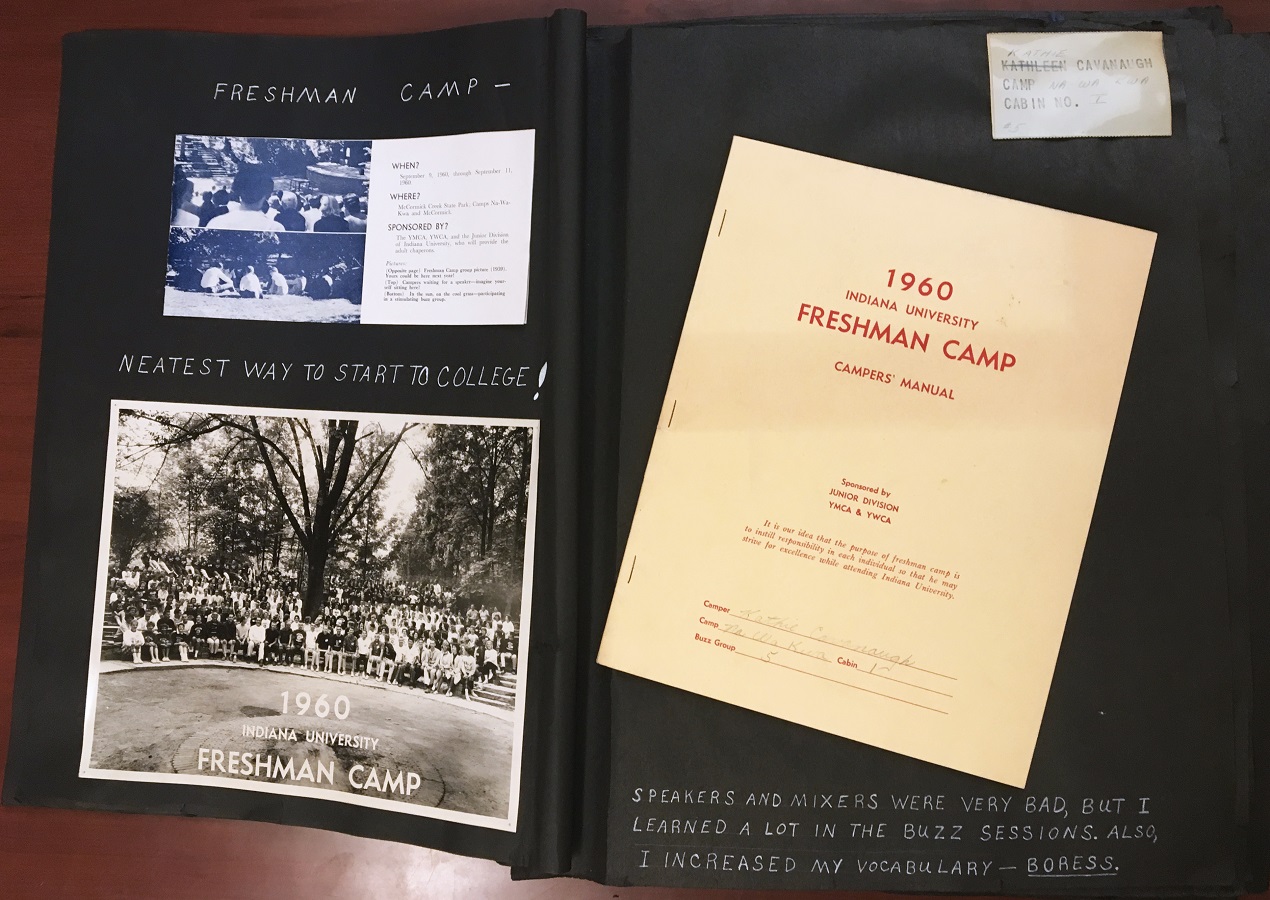 This collection contains three scrapbooks compiled by Cavanaugh during her time as an undergraduate student in the early 1960s. Each is filled with photographs, newspaper clippings, greeting cards, and other mementos that Cavanaugh saved to document the various social activities that she participated in, starting with Freshman Camp in the fall of 1960, which she described as “the neatest way to start college.” She saved many items related to her Gamma Phi Beta sorority, including rush schedules, group photos, and clippings from times when her sorority sisters made the newspaper. Cavanaugh loved attending sporting events on campus, and she dedicated spreads in two of her scrapbooks to the Little 500 bicycle race events in 1962 and 1963. 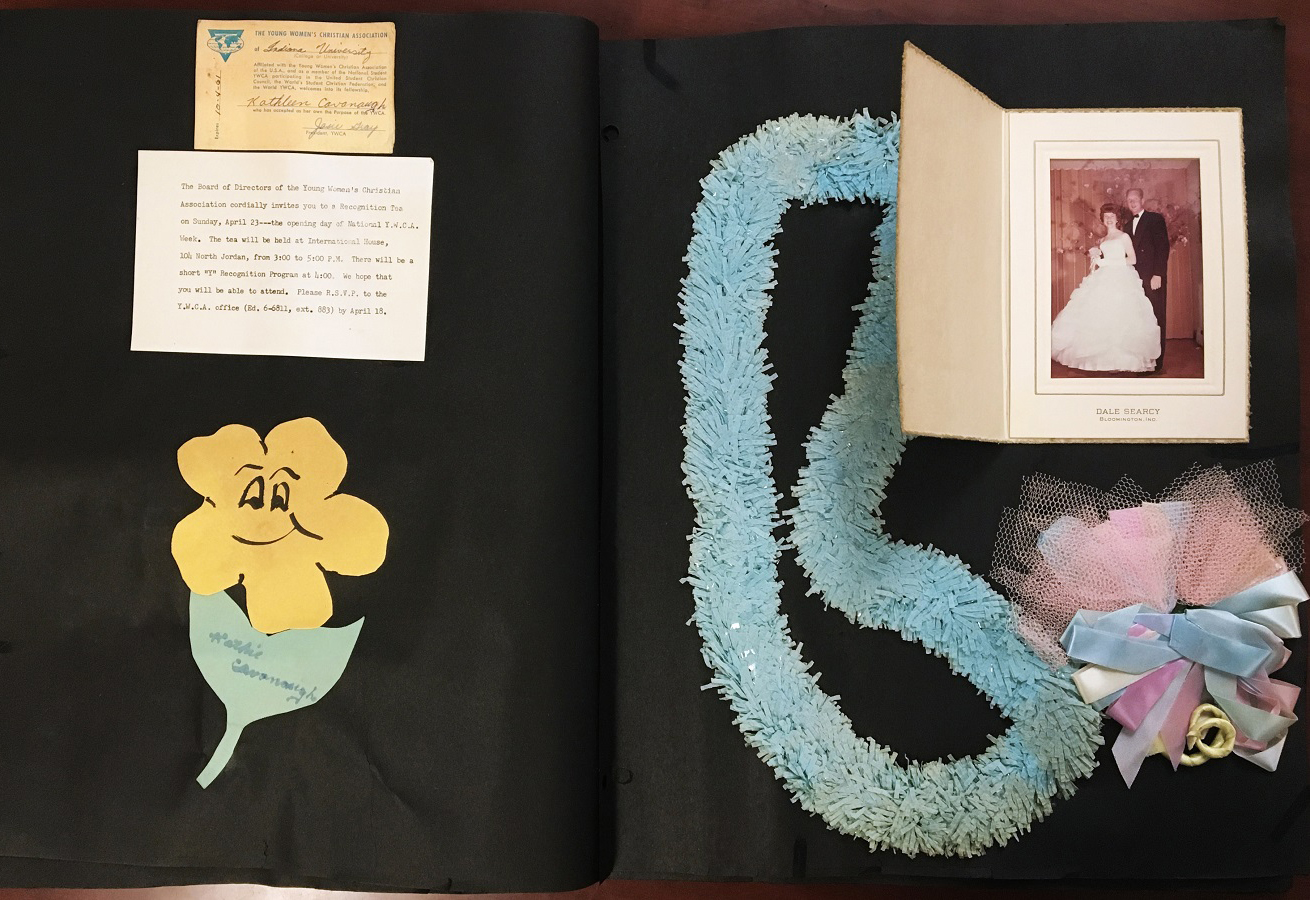 Pages containing mementos from one of the numerous dances that Cavanaugh attended as an undergraduate student. C617 Box 1.

Cavanaugh enjoyed collecting various knick knacks, saving things like coasters and matchbooks from her favorite restaurants on campus, and funny cards that she received from friends and family for her birthday and Valentine’s Day. One page contains a sparkly blue lei and a colorful corsage from one of the many dances that she attended over the years. In addition, Cavanaugh used these scrapbooks to document some of the big changes and exciting events that were going on around campus at the time, including the 1962 retirement of Herman B Wells as president of the university and famous comedian Bob Hope opening the Little 500 Variety Show in 1964.

Flipping through the scrapbooks that Cavanaugh compiled is a special opportunity to get an idea of what it was like to be a student at Indiana University in the early 1960s, from the perspective of someone who embraced the student life and participated in as many events and activities as she could, documenting her adventures along the way.

Cavanaugh’s scrapbooks contain memories from many sporting events, including the Little 500 bicycle races in 1962 and 1963. C617 Boxes 1 and 2.

If you would like to see the Kathleen Cavanaugh scrapbooks for yourself, please feel free to contact the IU Archives to set up an appointment.