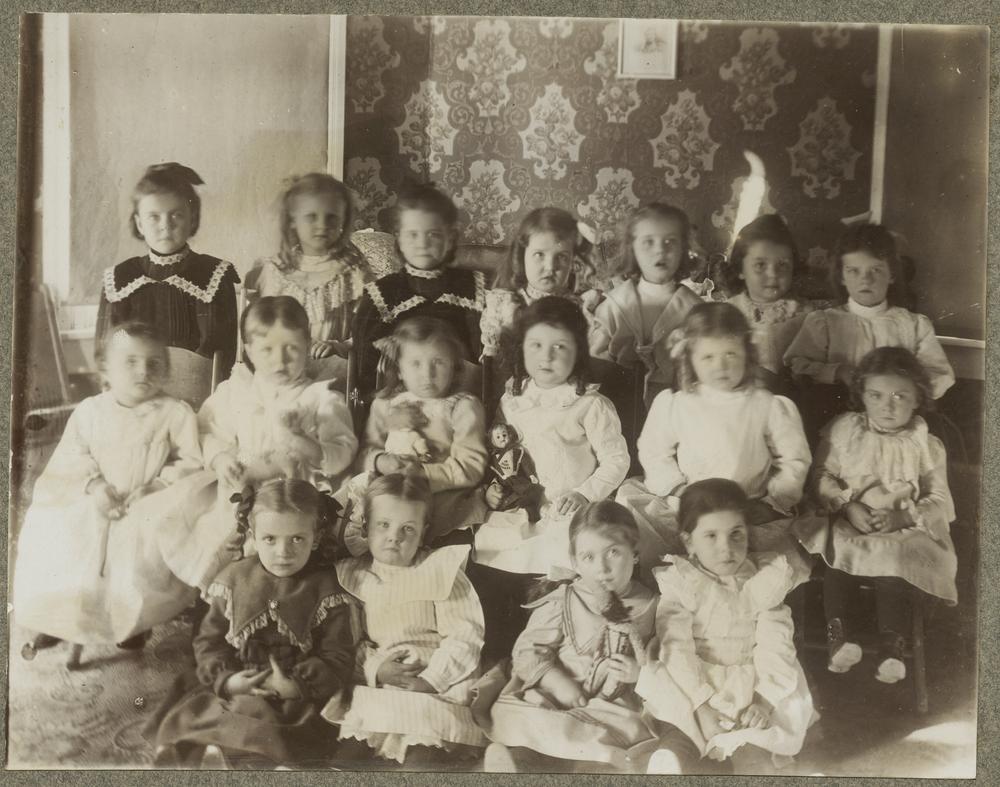 For a curator of photographs there is no image more appealing than one with a great deal of contextual information (e.g. names and date) and this image certainly fits into that category as the back side of the photograph gives us not only the names of those shown and the date taken, but also the event, the exact location of the event and even the name of the photographer. On top of that, a transcription of the original invitation is also present.

On February 12, 1902 Ruth Ralston Cravens held a birthday party in her home located at 222 East Fourth Street in Bloomington. Her stepmother sent out the following invitation to Ruth’s friends: “I will be four years old Wednesday, February 12, 1902. I am going to have a birthday party from two to four o’clock and I want you to come. I do not want you to bring or send me any presents. I just want you to come and play with me. Ruth Ralston Cravens.”

In response to the invitation, and according to a note written on the back of the image, sixteen girls attended the party and “…had a delightful time. Prof. John A. Stoneking, on Indiana University, took a photograph and each one of the guests received one as a souvenir of the occasion.”

The birthday girl was born on February 12, 1898 (her mother died eight days later). Ruth was graduated from IU in 1920 with a degree in English. From 1942-1956 she worked as an administrative assistant to IU President Herman B Wells. Ruth never married. She died January 20, 1982.

Ruth’s stepmother, Emma Lucille Krueger Cravens, worked in the IU Library and then as a secretary for IU President William Lowe Bryan.

Ruth’s father, John W. Cravens, graduated from IU in 1897. For many years he served as IU Registrar and Secretary to the IU Board of Trustees.

Others in the photograph known to have graduated from Indiana University are Mary Louden (AB 1919) and Frieda Hershey (AB 1921).