Many students are members of a club or two during college. It’s not uncommon. But, how many students can say they created an original club for themselves? What would this kind of informal club look like? Would you have rules?

The Moonlight Pleasure Club constitution is a document which shows us exactly what kind of club a group of Indiana University students decided to create for themselves in 1892.

The members of The Moonlight Pleasure Club were likely graduate students when they formed their club in 1892. They didn’t create a formal student organization or aim to recruit more members. No. These four students just sat down and wrote their own constitution. It appears that one male and one female student were the charter members who then initiated another male and female student into the club. This initiation appears to have been the reason for the document’s creation since the constitution itself calls for the club to have four members only. The document includes twelve articles or rules, and has signatures from all four students including two labeled as protesting and two labeled as affirming. But, who were these students? What was this club for exactly, and why did they name it Moonlight Pleasure?

Unfortunately, a thorough search of the archives has not yet yielded much more information about the club. The Arbutus IU yearbooks document each of the four student authors of the constitution and their time at IU, but there is no mention of the actual Moonlight Pleasure Club in any of the yearbooks. We don’t know much about this mysterious club, but the students who wrote and signed the club’s 1892 constitution were a bit easier to track down.

The four members of The Moonlight Pleasure Club were of similar ages, but each studied different academic subjects at IU. 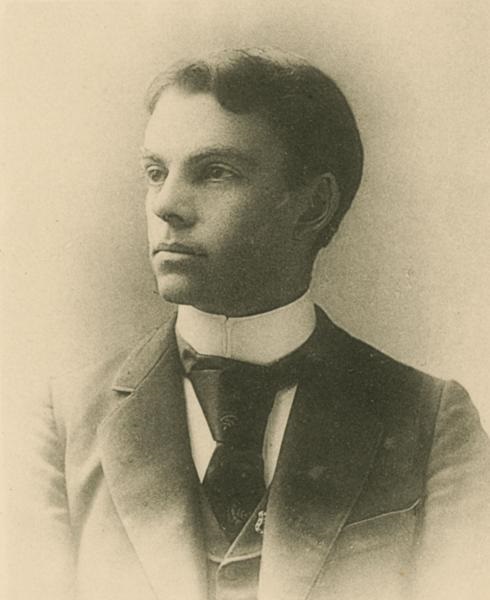 Frederick Wilson Truscott (b. 1870 – d. 1937) graduated from Indiana University with his A.B. in German in 1891. He earned his A.M. in 1892, and later obtained his Ph.D. Truscott eventually became a professor of German at Wilson College in Chambersburg, Pennsylvania. He also served in World War I in the U.S. Army.

Daniel T. Weir (b. 1864 – d. 1949) graduated from IU with his A.B. in physics in 1891 and he obtained his A.M. in mathematics in 1893. He went on to teach in Indianapolis.  Both Weir and Truscott contributed to war service efforts in various capacities. 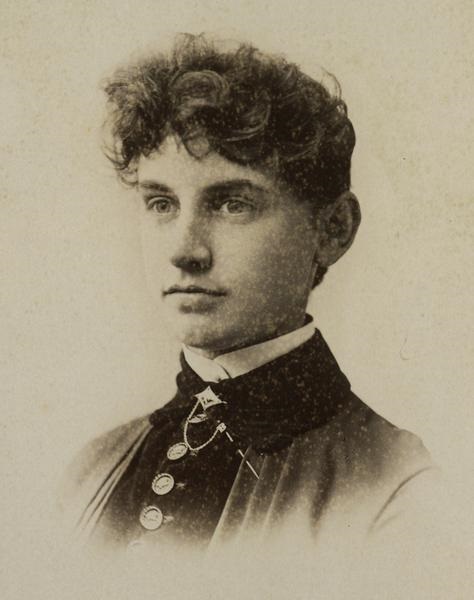 Unfortunately, this is all that’s currently known about the students. The two men are known to have worked as a teacher and a college professor after their time at Indiana University. A line in the constitution’s Article I implies that all four were studying to either become teachers or to simply obtain a liberal arts education. The line reads: “The motto of this club shall be, ‘A little nonsense now and then is relished by the wisest men and some high school teachers.'”  However, this interpretation of the line does not necessarily mean all members were educators.

In the late nineteenth century and early twentieth century, it was common for women to gain a college education but then go on to primarily be homemakers and mothers. This seems to have been the case for Maud Van Zandt and Grace Helen Woodburn who both appear to have become a “house wife” after marriage according to U.S. Census records.

While to this point we don’t know much more about these club members,  the constitution itself can offer a few more clues into what the students were like and what they did as a club.  Articles I., II., and III. explain that the club basically aimed to have fun together as a group of friends. The club was likely a chance for each student to get  away from school work and stress.

The next few articles in the constitution seem to contain stereotypical details and rules that a club might want to establish. The difference however, between this constitution and the usual sort of document used by a formal club is its tone.

The student members of the Moonlight Pleasure Club made jokes and appeared to mock formal club rules while writing their constitution. But even some of their jokes are representative of the social milieu of the time.  There are two instances when the document makes it clear that the male members have more power and status in the club than the women. Articles V. and VIII. seem to make jokes at the expense of the women club members. While there are no leaders or positions of power in the club, Article V. also says “of course in cases demanding a high grade of intelligence the women shall give place.”  And though the club appears to be democratic, it also gives the “gentlemen” the ability to have the final say in any tied votes.

But, were these rules all serious? Were students mocking social aspects of their time or did they seriously imagine men had a ‘higher grade of intelligence’ than women? Their constitution also says that the club “initiation fee the price of one pair of shoes for each of the charter members.” Is this a social idiom of the day, or were they mocking the often required fees for student organizations? Did they write this document as a joke with the aim to mock other university student clubs?

Unless we find more about the Moonlight Pleasure Club, we might not find out if these students were joking or mocking other student clubs, or if this was a serious matter to these students. In any case, this document provides a unique glimpse of what a group of friends did for fun together. 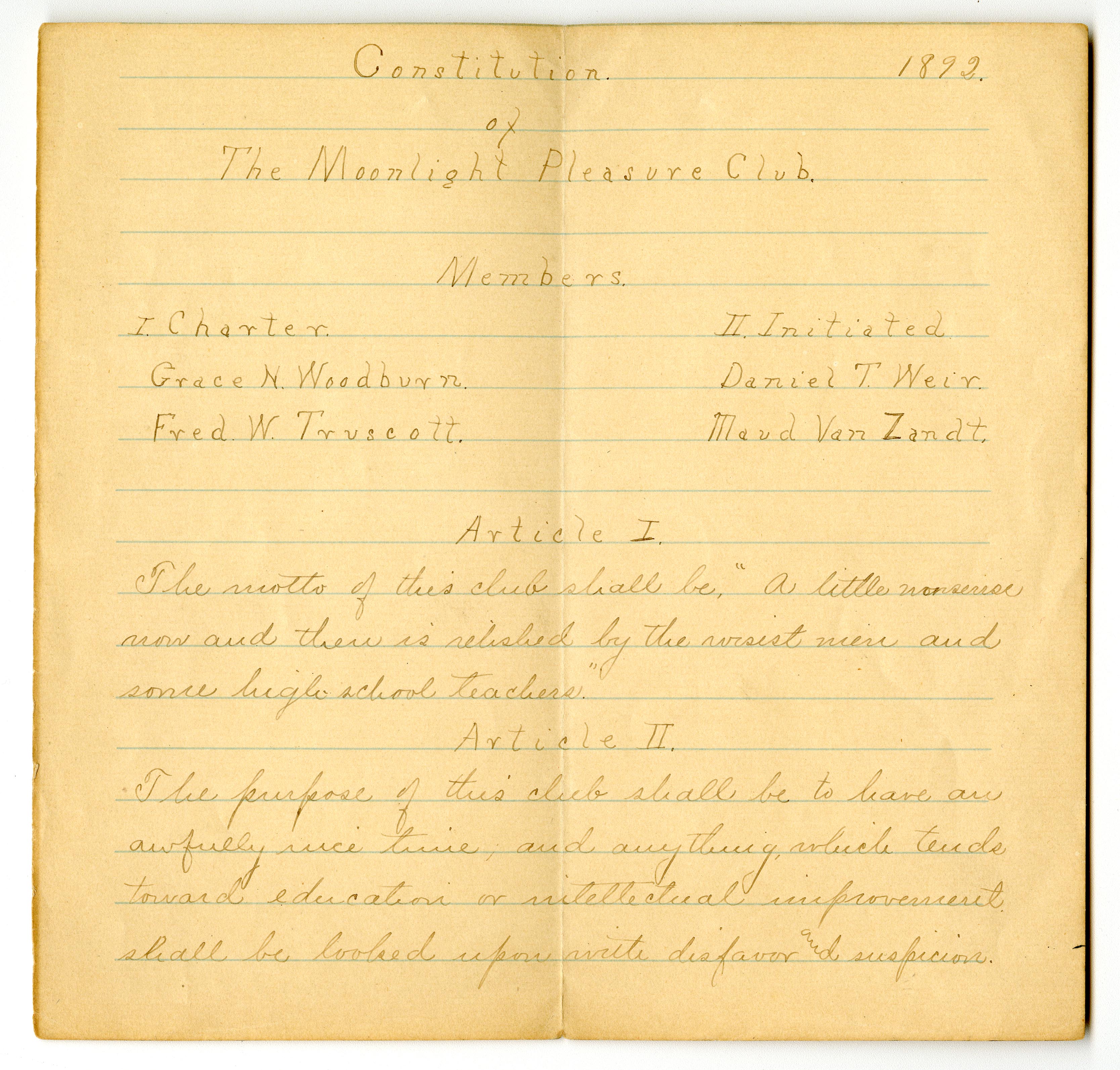 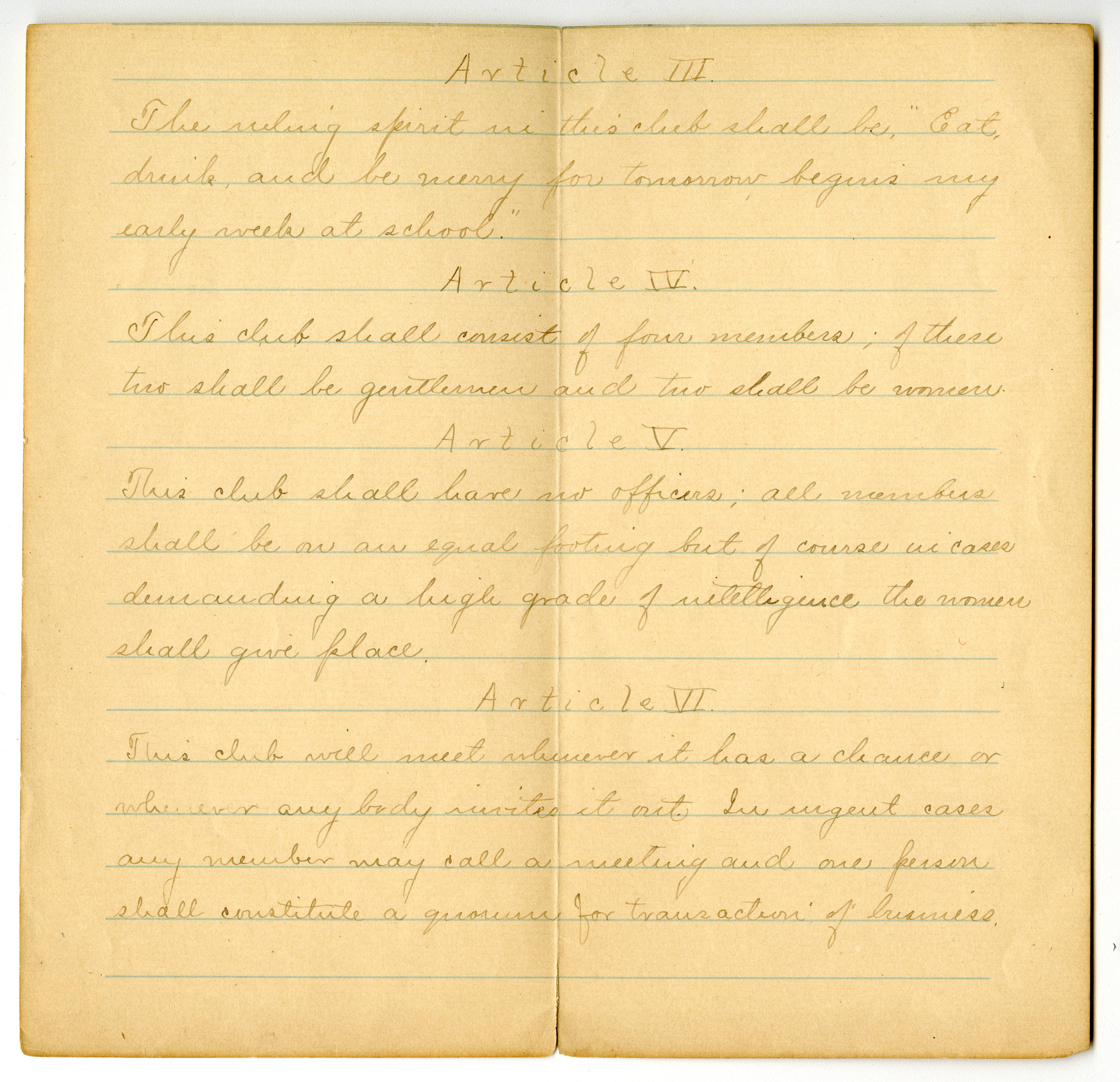 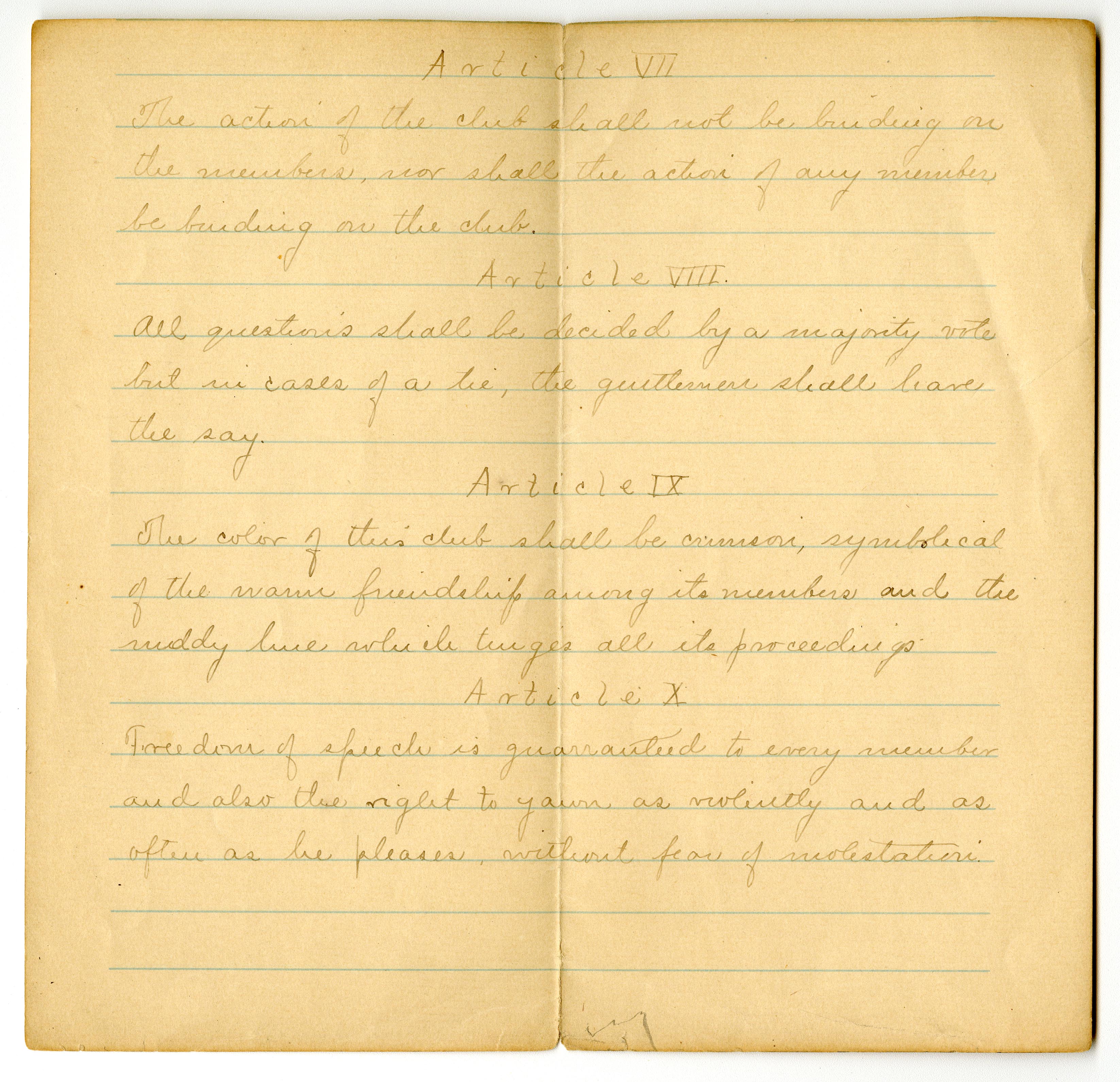 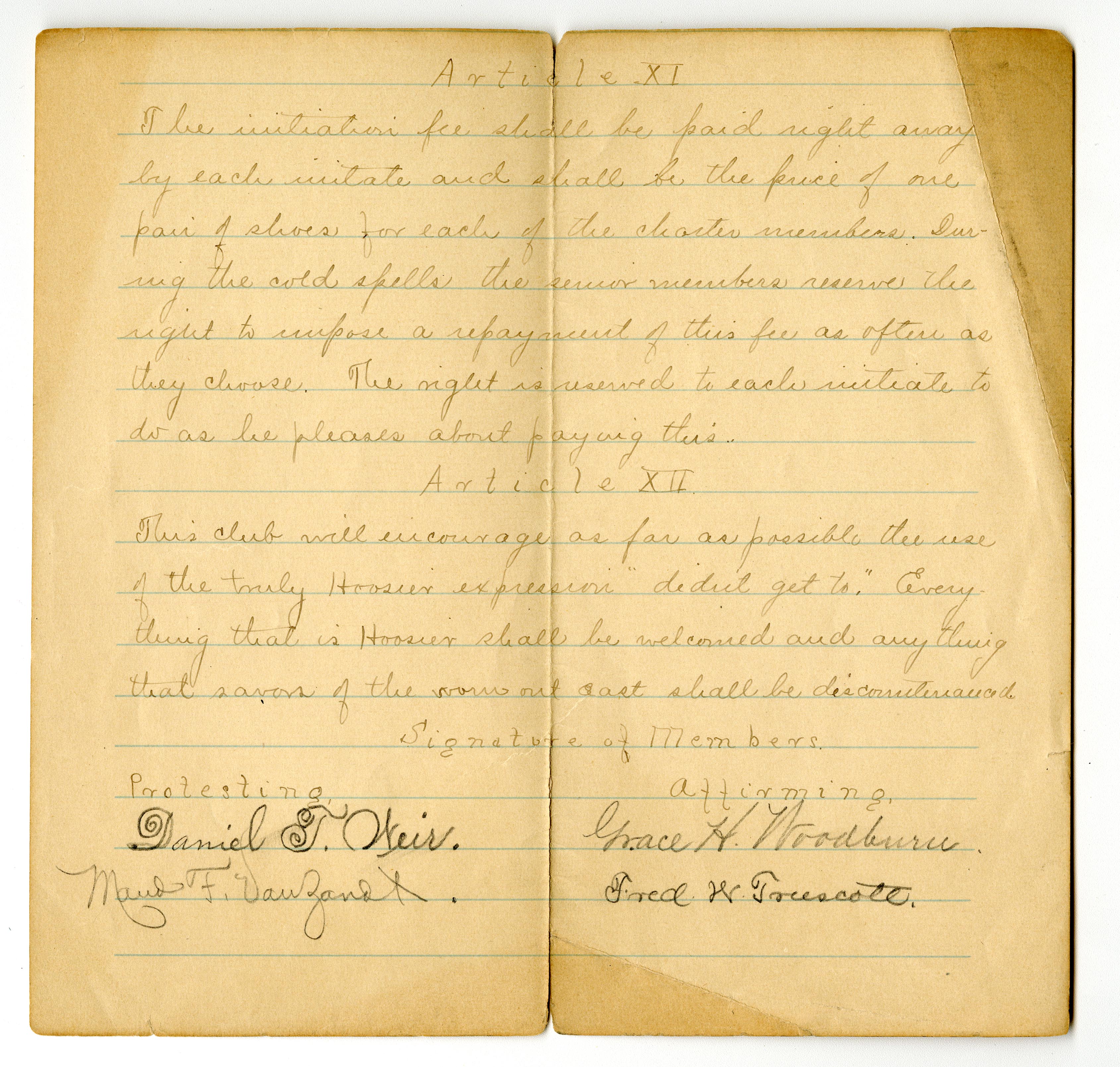 Below is a transcript of all four pages of the constitution:

Constitution of The Moonlight Pleasure Club 1892.

Article I.
The motto of this club shall be, “A little nonsense now and then is relished by the wisest men and some high school teachers.”
Article II.
The purpose of this club shall be to have an awfully nice time, and anything which tends toward education or intellectual improvement shall be looked upon with disfavor and suspicion.

Article III.
The ruling spirit in this club shall be, “Eat, drink, and be merry for tomorrow begins my early week at school.”
Article IV.
This club shall consist of four members; of these two shall be gentlemen and two shall be women.
Article V.
This club shall have no officers; all members shall be on an equal footing but of course in cases demanding a high grade of intelligence the women shall give place.
Article VI.
This club will meet whenever it has a chance or whenever any body invites it out. In urgent cases any member may call a meeting and one person shall constitute a quorum for transaction of business.

Article VII.
The Action of the club shall not be binding on the members, nor shall the action of any members be binding on the club.
Article VIII.
All questions shall be decided by a majority vote but in cases of a tie, the gentlemen shall have the say.
Article IX.
The color of this club shall be crimson, symbolical of the warm friendship among its members and the ruddy time which tinges all its proceedings.
Article X.
Freedom of speech is guaranteed to every member and also the right to yawn as violently and as often as he pleases without fear of molestation.

Article XI.
The initiation fee shall be paid right away by each initiate and shall be the price of one pair of shoes for each of the charter members. During the cold spells the senior members reserve the right to impose a repayment of this fee as often as they choose. The right is reserved to each initiate to do as he pleases about paying this.
Article XII.
This club will encourage as far as possible the use of the truly Hoosier expression “didn’t get to.” Everything that is Hoosier shall be welcomed and anything that savors of the worn out east shall be discountenanced.

Contact the IU Archives to see the Moonlight Pleasure Club constitution in person.