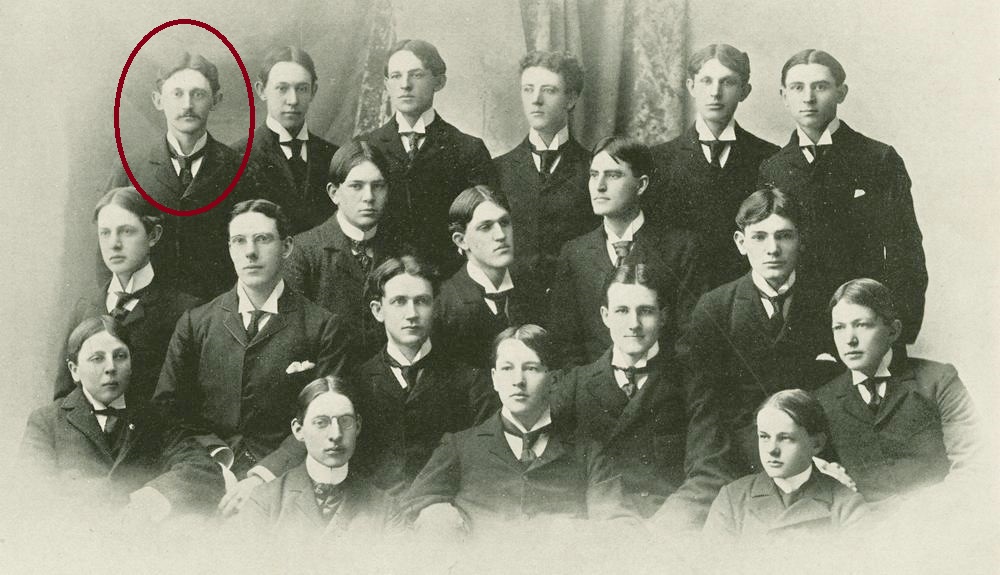 In this Sincerely Yours post, we will explore IU through the eyes of Harry V. Craig, an Indiana native of Noblesville who came to IU in 1890 to study history. The IU Archives first acquired a portion of the Harry V. Craig papers back in 2000, but later received additional materials in 2003 from a man named Mark Brattain.  Mr. Brattain had seen the Harry V. Craig papers finding aid on the Archive’s website and provided letters he found with his father, Hal Brattain, in a wooden box in the hayloft of a neighbor’s barn back in the 1970s. The barn belonged to the late Ray Forrer, who was probably some relation to Harry’s mother Elizabeth (whose maiden name was Forrer).

Most of the letters contained in the Harry V. Craig Papers are correspondence he received from friends, family members (his father, brother, cousin, and mother), and fraternity brothers from Phi Kappa Psi. There are, however, a handful of letters by Craig himself detailing his experience at IU.  In letters to his mother, Mr. Craig’s most frequent correspondent, Craig details his daily life and expenses as well as happenings around town and the campus.

In this first letter, we get a glimpse of Mr. Craig as a freshly minted college student finding his way across campus, making new friends, learning more about the world outside of Noblesville, and settling into his new boarding house likely located on East 6th Street (according to the August 30, 1895 Bloomington Courier).  IU-affiliated readers will most likely recognize the names of some of Mr. Craig’s professors, Professor Atwater and Professor Swain: 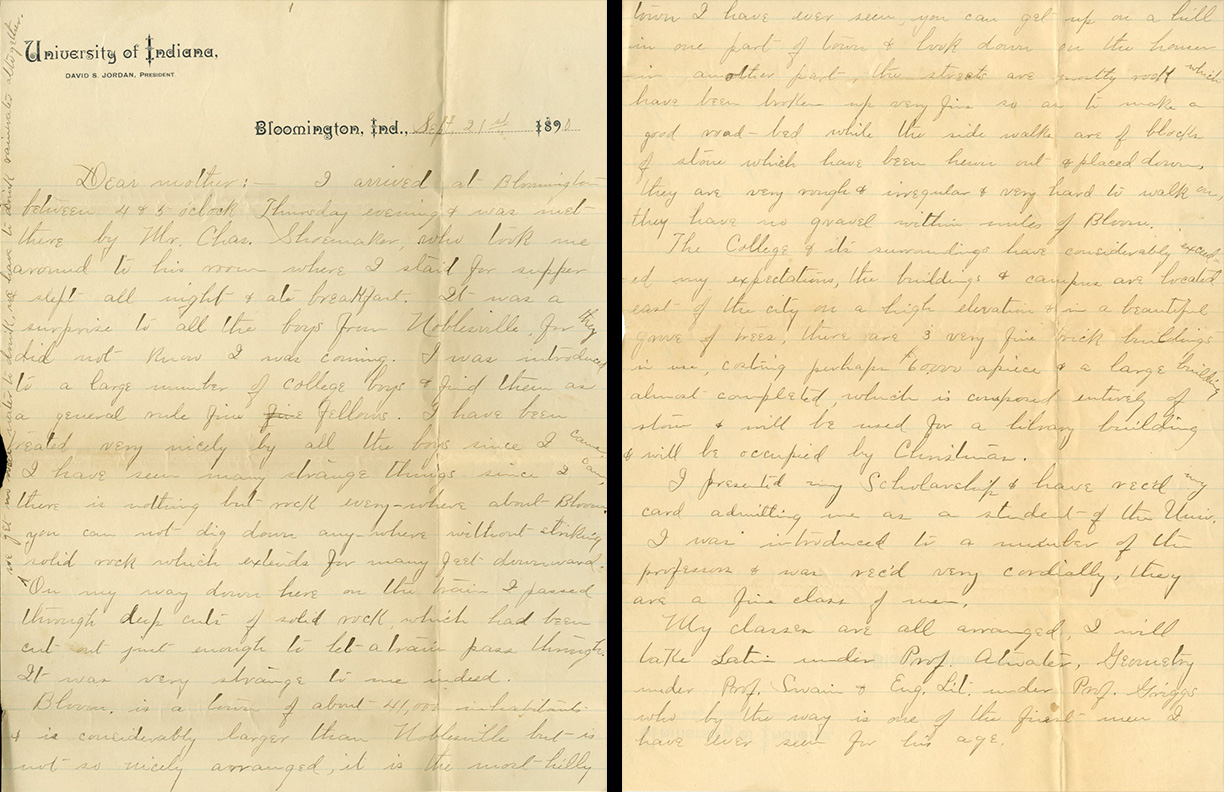 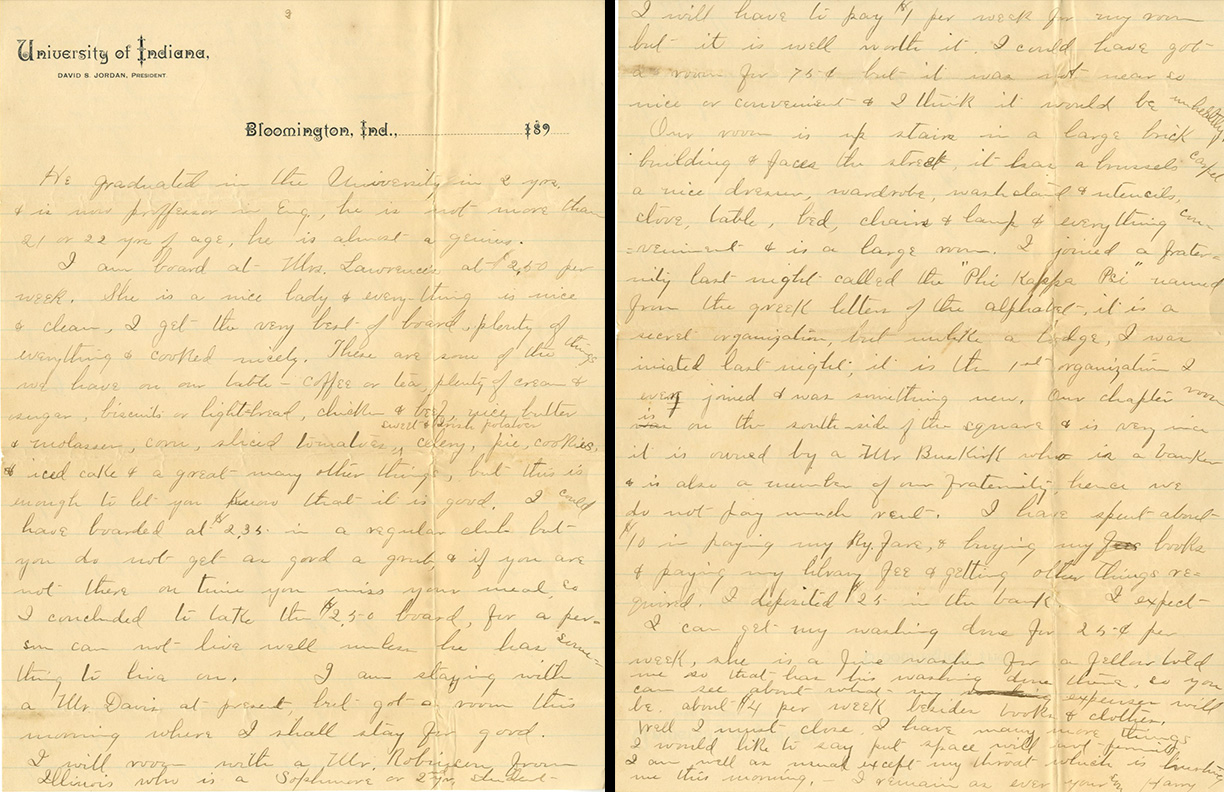 I arrived at Bloomington between 4 and 5 o’clock Thursday evening and was met there by Mr. Chas Shoemaker, who took me around to his room where I staid [sic] for supper slept all night and ate breakfast. It was a surprise to all the boys from Noblesville, for they did not know I was coming.  I was introduced to a large number of college boys and find them as a general rule fine fellows. I have been treated very nicely by all the boys since I came. I have seen many strange things since I came. There is nothing but rock everywhere about Bloom. you can not [sic] dig down anywhere without striking solid rock which extends for many feet downward. (we get no more water to drink, we have to drink rainwater altogether) On my way down here on the train I passed through deep cuts of solid rock, which had been cut out just enough to let a train pass through. It was very strange to me indeed.

Bloom. is a town of about 41,000 inhabitants and is considerably larger than Noblesville but is not so nicely arranged, it is the most hilly town I have ever seen, you can get up on a hill in one part of town and look down on the houses in another part, the streets are mostly rock which have been broken up very fine so as to make  road-bed while the side walks [sic] are of blocks of stone which have been hewn out and placed down, they are very rough and irregular and very hard to walk on, they have no gravel within miles of Bloom.

The College and its surroundings have considerably exceeded my expectations, the buildings and campus are located east of the city on a high elevation and in a beautiful grove of trees, there are 3 very fine brick buildings in use, costing perhaps $60,000 apiece and a large building almost completed, which is composed entirely of stone and will be used for a library building and will be occupied by Christmas.

I presented my Scholarship and have rec’d my card admitting me as a student of the Univ. I was introduced to a number of the professors and was rec’d very cordially, they are a fine class of men.

My classes are all arranged, I will take Latin under Prof. Atwater, Geometry under Prof. Swain and Eng. Lit. under Prof. Griggs who by the way is one of the finest men I have ever seen for his age. He graduated in the University in 2 yrs and is now [a] professor in Eng., he is not more than 21 or 22 yrs of age, he is almost a genius.

I am board[ing] at Mrs. Lawrence’s at $2.50 per week. She is a nice lady and everything is nice and clean, I get the very best of board plenty of everything and cooked nicely. There are some of the things we have on our table – coffee or tea, plenty of cream and sugar, biscuits or light-bread, chicken and beef, sweet and Irish potatoes, nice butter and molasses, corn, sliced tomatoes, celery, pie, cookies, and iced cake and a great many other things, but this is enough to let you know that it is good. I could have boarded at $2.35 in a regular club but you do not get as good a grub, and if you are not there on time you miss your meal, so I concluded to take the $2.50 board, for a person can not [sic] live well unless he has something to live on. I am staying with a Mr. Davis at present, but got a room this morning where I shall stay for good. I will room with a Mr. Robinson from Illinois who is a sophomore or 2nd yr student. I will have to pay $1 per week for my room but it is well worth it. I could have got a room for 75₵ but it was not near so nice or convenient and I think it would be unhealthy. My room is up stairs [sic] in a large brick building and faces the street, it has a brussels carpet, a nice dresser, wardrobe, wash stand and utensils, stove, table, bed, chairs, and lamp and everything convenient and is a large room. I joined a fraternity last night called the “Phi Kappa Psi” named from the greek letter of the alphabet. It is a secret organization, but unlike a lodge, I was initiated last night, it is the 1st organization I even joined and was something new. Our chapter now is on the south-side of the square and is very nice it is [served] by a Mr. Buskirk who is a banker and is also a member of our fraternity, hence we do not pay much rent. I have spent about $10 in paying my Ry. [Railway] fare, and buying my books and paying my library fee and getting other things required, I deposited $25 in the bank. I expect I can get my washing done for 25₵ per week, she is a fine washer for a fellar told me so that has his washing done there. So you can see about what my expenses will be about $4 per week besides books and clothes. Well I must close. I have many more thigs I would like to say but space will not permit. I am well as usual except my throat which is bothering me this morning.

I remain as ever your son,

Harry’s mother replies soon after, giving him updates about friends and family and imparting motherly advice about the company he should keep, especially the ladies…:

Dear Harry: I received your letter yesterday evening[.] [W]as glad to hear you was [sic] geting [sic] along all right. [W]e are all well at this time[.] Pa and Fred went over to the tent to meeting[.] [I]t will be two weeks to morrow [sic] since they commenced their meeting. It is real nice to be there at night[.] [W]e were there monday night and Lida and Maggie Fred and Abner went last night. I thought I would stay at home and write you a fiew [sic] lines as I did not like to take Little Court out at night. Saturday 27th he was 4 month [sic] old and weight [sic] 15 lbs. [H]e is growing so nicely. Mother was hear [sic] yesterday they are all well. Nan and Clara was hear [sic] Sunday evening. Nan says he has such a nice school it just suits him. [H]as no little ones to contend with. When you rite [sic] again tell us something about your school and how you are geting [sic] Along. [O]f cours [sic] you have not gone long enough yet to tell much about it but do as well as you can. Don[‘]t think to [sic] much of other things such as going with the girls. Be very care full [sic] who you go with as you don[‘]t know them yet so you go with nice respectful Ladies. [I]t is going to cost A great deal more than you thought it would. You said you thought $30 would take you through the first term. It will take more than twice 30[.] [T]here is going to be A liturary [sic] societ [sic] at fairview friday night. Maggie Trit as Mollie calls her is hear [sic][.] [Y]ou bet she is A fast worker[.] I like her very much. [S]o far well [sic] as all are in bed that is hear I will close for this time[.] Lida joins in Love write soon from your Ma[.]

Craig graduated from Bloomington in 1896 with an AB in history.  After graduating, he returned to Noblesville for a while to teach history and then went on to work a wide array of jobs including a salesman, hotel clerk, and a position with the National Engraving Company in New York.  He was also the coordinator for the Denver Training Center of the Veteran’s Bureau at one point in his career. In 1962 the Alumni Association reached out to update their information on him, but found at that time that he was already deceased.  He apparently passed away on November 2, 1955 in California.