We all enjoy our podcasts, niche radio shows, and morning news during the drive to work or school, but the history of radio has a far reaching past beyond our modern version of it. For much of the twentieth century, radio was the entertainment and news medium of choice — not television, and radio has a particularly interesting history here at IU! 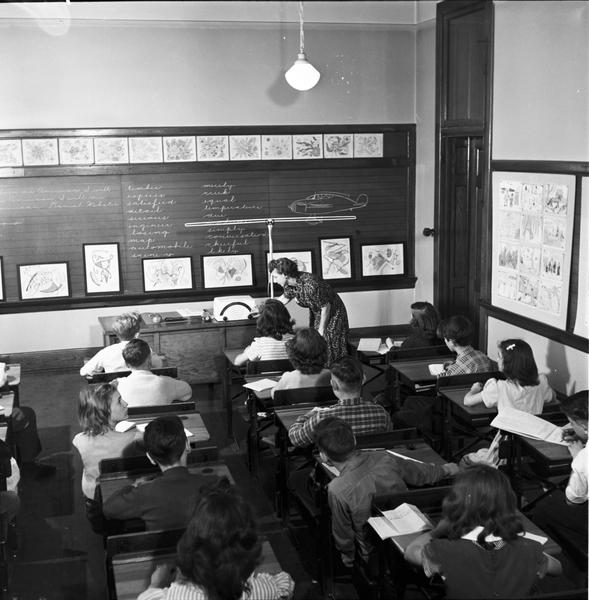 Class listening to School of the Sky, Archives image no. P0050223

The Indiana School of the Sky radio program of the Indiana University Department of Radio and Television began broadcasting educational radio programs in 1947 and continued through the early 1960s. The program reached schools throughout Indiana and nearby states and led to new course offerings at IU. IU students performed in the radio programs originally intended for children ages 4-8 which aired for 15 minutes during each school day.

Eventually the program’s popularity called for further programming for high-school students, and later adults tuned in as well.  Topics in every subject from history and music to current events and news were covered during the various episodes of the program.

The School of the Sky series discussed possible careers for students, music and literature, how to find a job, dating and growing up, and current events.  In many ways the program’s subjects seemed to help students learn both educational topics and how to be a part of society.  Other episodes focused on the news and events of the time that were likely difficult for students to understand.

To explain the Cold War and Communism to audiences in 1962, as part of the “How It Happened” series the School of the sky performed a skit about West Germany. From the view of an airplane and from the ground, the actors describe West Berlin as an “island surrounded by Communism.”  The narrator and the characters in the show provide listeners with the history and problematic results of World War II.  Students learned, through the vivid description of the show’s script, the differences between East and West Berlin, Check Point Charlie, and the Berlin Wall.  The picture the program paints shows the effects of Communism and the grim reality in Berlin on the other side of the Wall.  On the ground in West Berlin, the narrator explains that East Berliners have a very different life than West Berliners and the listeners in the United States: President Wells speaking for the opening of the School of the Sky, Archives image no. P0048605

“The Communists, in fear of having everybody run away to freedom, have built a wall to stop them.  This wall is the ugliest thing I have ever seen.  It is also a very sad thing to see, because behind it are people who want freedom, want to live like you and me, but the wall holds them in.  If they try to get over the wall, the Communists shoot them.  Many young students have died trying to get over into West Berlin.”

The program effectively brought a faraway place and the conflict of the Berlin Wall and Cold War home to the listeners in Indiana.

The students here at IU were the radio show’s writers, performers, and producers. The Indiana School of the Sky eventually reached thousands of classrooms and children while also providing college students with invaluable radio experience. The bound volumes containing the scripts of the program and the teaching manuals found in the IU Archives’ Indiana School of the Sky records offer enlightening insight into the stage management, acting, and preparation that was necessary for each episode.

In 2009, the Media Digitization and Preservation Initiative (MDPI) at IU found numerous lacquer discs containing recordings of The School of the Sky. These are now digitized and available online through Media Collections Online.