While recently perusing the reference files in the IU Archives reading room, I happened upon an unusual object: a vinyl record. Thinking this was a strange item to be in a reference file, I spoke with one of the archivists and decided to do some further investigation. As it turns out, the record belonged to James Robert Leffler, known as Bob Leffler. After some searching, I discovered that the IU Archives does not hold much about him. This proved to be a potential case study on how to do archival research, so I began my work. 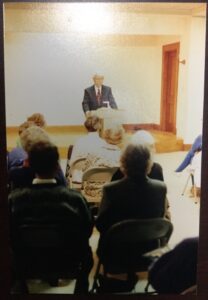 I was able to determine that a Leffler archival collection exists at the Monroe County History Center Research Library. This is an instance where the archival research process can be more complicated than originally thought. Instead of simply looking at the IU Archives resources as I normally do for blog posts, I was going to have to piece together the story from outside sources—including making a trip off-campus. In the meantime, I worked on locating any information I could from the resources in the IU Archives.

One resource I turned to was Archives Online at Indiana University, our portal for searching archives collections across campus. I determined that Leffler was not in any collections held by the University Archives, but that he did appear in a collection from the Indiana University Center for the Study of History and Memory, now the Center for Documentary Research and Practice. This particular archive contained an oral history interview on movie theaters in which Leffler had participated, but I was more concerned with his biography as it pertained to IU.

I also utilized online resources provided by the IU Libraries, such as the NewspaperARCHIVE and Ancestry Library Edition , to find more information about Leffler. I found very little beyond immediate family member names and public records through Ancestry; however, the reference file where I had originally found the vinyl record did contain some information. This file was not labeled for Leffler, but for Leffler’s family; it contained mostly genealogical information. Although it did not provide information about Bob Leffler, I did discover that he had relatives, Shepherd and Isaac Leffler, who had attended Indiana University in its early years. Both are mentioned in the First Catalogue as students in the early 1830s. Apparently, Shepherd moved to Iowa and became a Congressman. 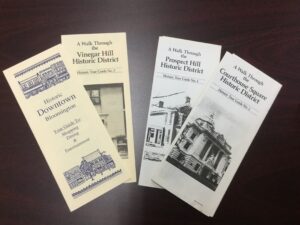 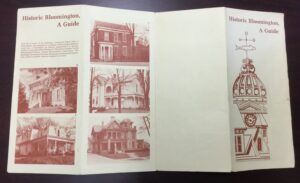 Since I discovered that the Monroe County History Center Research Library had a collection on Leffler,  I contacted Emily Noffke, who very kindly scheduled a research visit. When I arrived, I was required to wash my hands before I viewed the archival collection. This is a small example of how different institutions have different rules for interacting with archival collections. While the Leffler collection was small, I did get pictures of Leffler and his files. Thanks to his obituary, I learned that he did indeed have a closer connection to IU than I originally thought. Leffler received his bachelor’s degree from the Cincinnati Conservatory of Music, but he came back home to Bloomington and attended the Indiana University School of Music for his master’s degree. He went on to teach music at the Cincinnati Conservatory of Music and the New York Institute for the Education of the Blind. Leffler also became known for his local history (Bloomington) expertise. He was a member of the Monroe County Historical Society, who named him Historian/Laureate of Monroe County. Most of his collection at the MCHC Research Library appears to be his notes and work on Monroe County history.

Leffler listed in the upper left-hand corner of the Indiana University Catalog, 1936

So what about the vinyl record? It is labeled “The Power of Love” and is accompanied by sheet music and correspondence. It appears that, as a musician, Leffler was asked about the recording of the song “The Power of Love” on this record. Apparently, the song was written by Jim Boothe, one of the writers of “Jingle Bell Rock.” 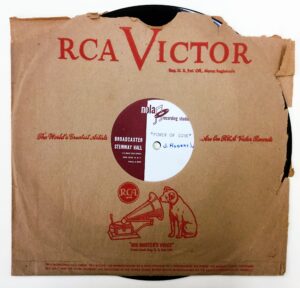 “The Power of Love”

While this is only a small example, my quest to discover more about Bob Leffler and his record exemplify the exciting journey of archival research. Thank you to the Monroe County History Center Research Library and Emily Noffke for the research help.