Autograph books provide a fascinating way to understand social interactions and genealogy. These objects contain signatures and messages from one’s friends and family, handwriting practice, drawings, and memorabilia. While going through the Indiana University Archives small collections, I found four of these books dating from the nineteenth century. I was immediately charmed by their Victorian aesthetic and the sincere sentiments written within. I also discovered how they provide intriguing paths into family histories of the Midwest—and of Indiana University students.

Two of the autographs books were created by a certain Jacob A. Zoll from 1881-1886, and the other from 1885-1897. The first book captured my attention because even though it dates back to the 1880s, it is full of colorful paper stickers in the form of spring flowers, cherubs, and wildlife. It reminded me of my own adolescent obsession with Lisa Frank stickers. 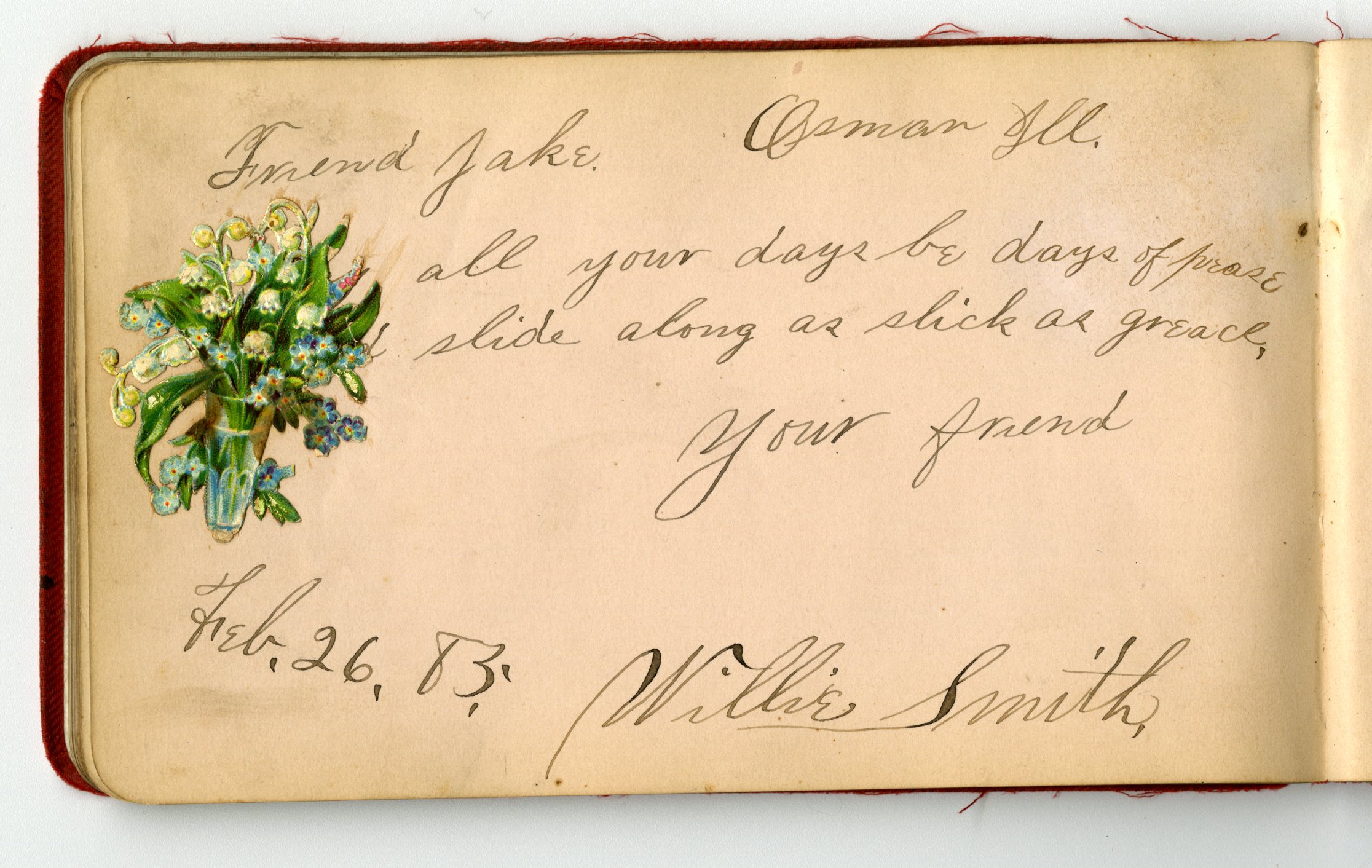 It was not immediately clear to me who Zoll was, or what (if any) relationship he had with Indiana University. As an art historian-turned-training-archivist, I decided to beef up my genealogy research skills to find this out. I turned to the Ancestry Library Edition, a resource accessible through the IU Libraries, and discovered through U.S. census records that Zoll was born in Ohio in 1861. By 1880, he lived in Belle Flower, Illinois with his family. When he was older, Zoll moved to Urbana, Illinois, became a carpenter, and lived with his wife and two stepsons.

Learning about Jacob Zoll’s biography helped solve another mystery—the identity of Clara Burkett, the creator of another one of the autograph books at the IU Archives. Clara’s book was presented to her by her father on September 24, 1879. She collected her first signature four days later, in Marshall, Indiana. Her friend Mary English wrote simply, “Remember me Clara.” The book mostly contains poems and signatures from schoolmates and cousins, scattered across southern Indiana and Illinois counties. Based on my census research, I confirmed that Clara was, in fact, Jacob’s wife.

Naturally wanting to find more information about Clara, I soon discovered how difficult it can be to track genealogy for women. In order to trace her in Ancestry records, I had to search her various used names (and spellings) across her single and married life. She was born Clara Burkett in Adams County, Pennsylvania, in 1864. A minister’s daughter, her family moved around Indiana and Illinois in the late 1800s. In 1882, she married John Milton Wolfe. They had two children, Elmer and Wirskenn (known as “Winn”). According to the Danville Daily News, tragedy struck in August 1887, when John Wolfe died of typhoid fever at the age of 26. Clara raised her sons as a single mother until 1890, when she married Jacob in McLean County, Illinois.

This unveiled family history made me view Jacob’s and Clara’s autograph books in a more emotional light. Without these details, I would have overlooked the evidence of genuine affection this combined family had for one another. Elmer’s and Winn’s signatures appear all over the pages of Clara’s book. Winn wrote on December 30, 1895:

“My friend mother is a comforter and love to me.
That when you read this you remember me.
No one like a friend so clear to me,
Winnie Wolfe.”

Also touching, Elmer wrote in his stepfather’s autograph book on January 25, 1895: “When this you see/Think of me/Your boy, Elmer.” For me, this experience was a powerful example of how archival research can bring to the surface individual voices and family stories that may otherwise be lost in historical narratives.

After all of this research, I still had one mystery to solve—how these autograph books ended up in the IU Archives in the first place. The fourth autograph book was owned by “Rosa,” although her last name was not immediately evident. Her autograph book, kept 1881 through 1886, is full of the same charming paper stickers that appear in Jacob A. Zoll’s books. Rosa’s friend Charley Frankenberger attached a sticker of mallard ducks to his humorous message on February 3, 1884: “May all your days/Be spent in piece [sic] /And your old/Man dies in Greace [sic].” 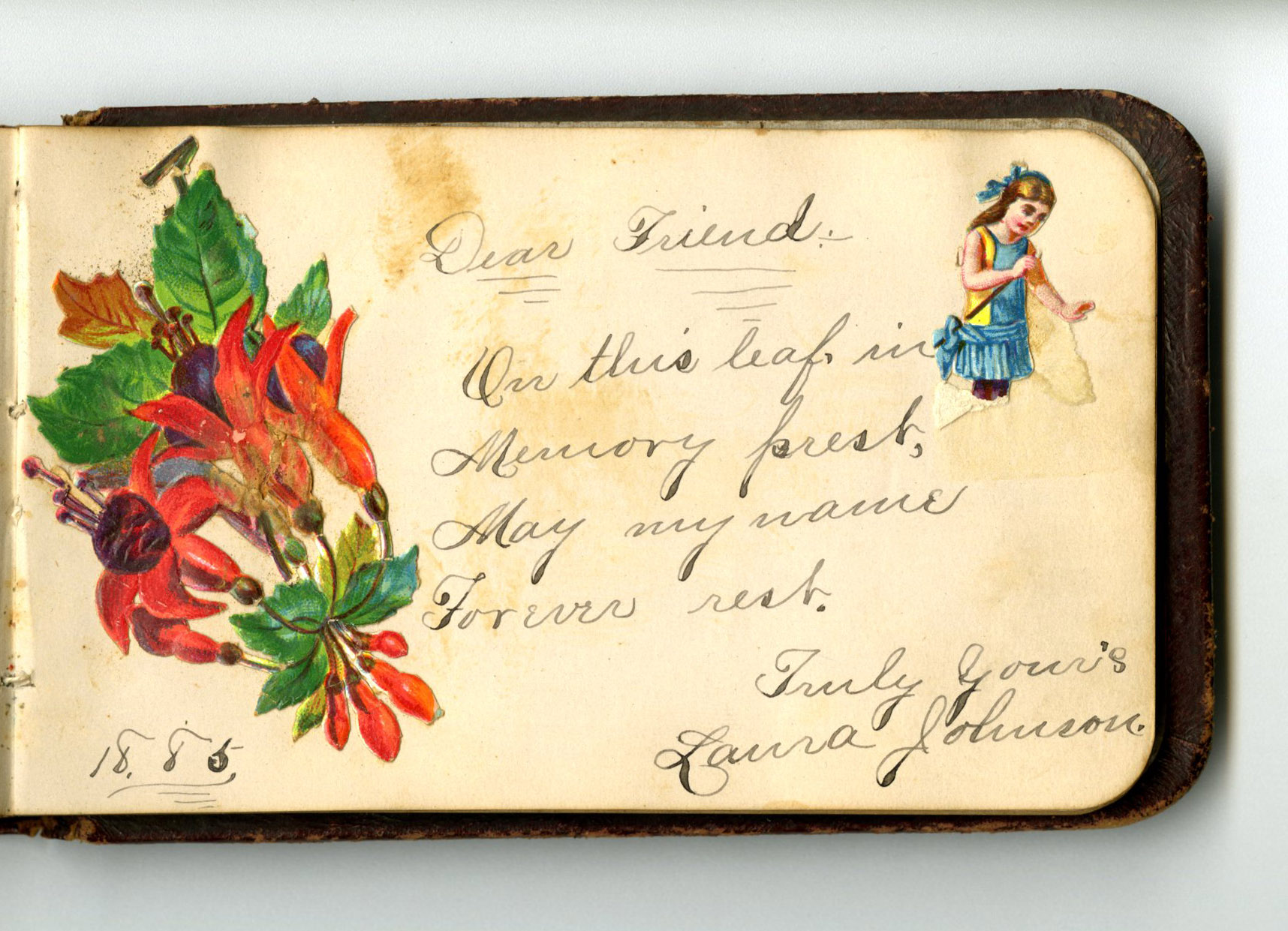 To identify the mysterious “Rosa,” I turned to the rosters of Indiana University graduates held in the Archives reading room, and noted relevant surnames from these autograph books. After cross-referencing the names with Ancestry records, I found one exact match: Ralph Verlon Wolfe, who graduated between 1936 and 1939. His mother’s name? Rosa Wolfe. Coincidences aside, I found it highly probable that Ralph’s mother was Rosa Wolfe, the autograph book’s original owner. Genealogy records provided evidence that Rosa lived in southern Illinois and Indiana, and had some of the same relatives as Elmer and Winn Wolfe. Thus, I made an educated connection that Ralph Wolfe (or one of his own descendants) donated this entire set of autograph books as a family collection.

Combing through genealogy and I.U.-specific records to map these autograph books was a real archival journey for me. The autograph books provide an intimate, and even touching glimpse into historical family dynamics. To view these special objects yourself, contact the Indiana University Archives. 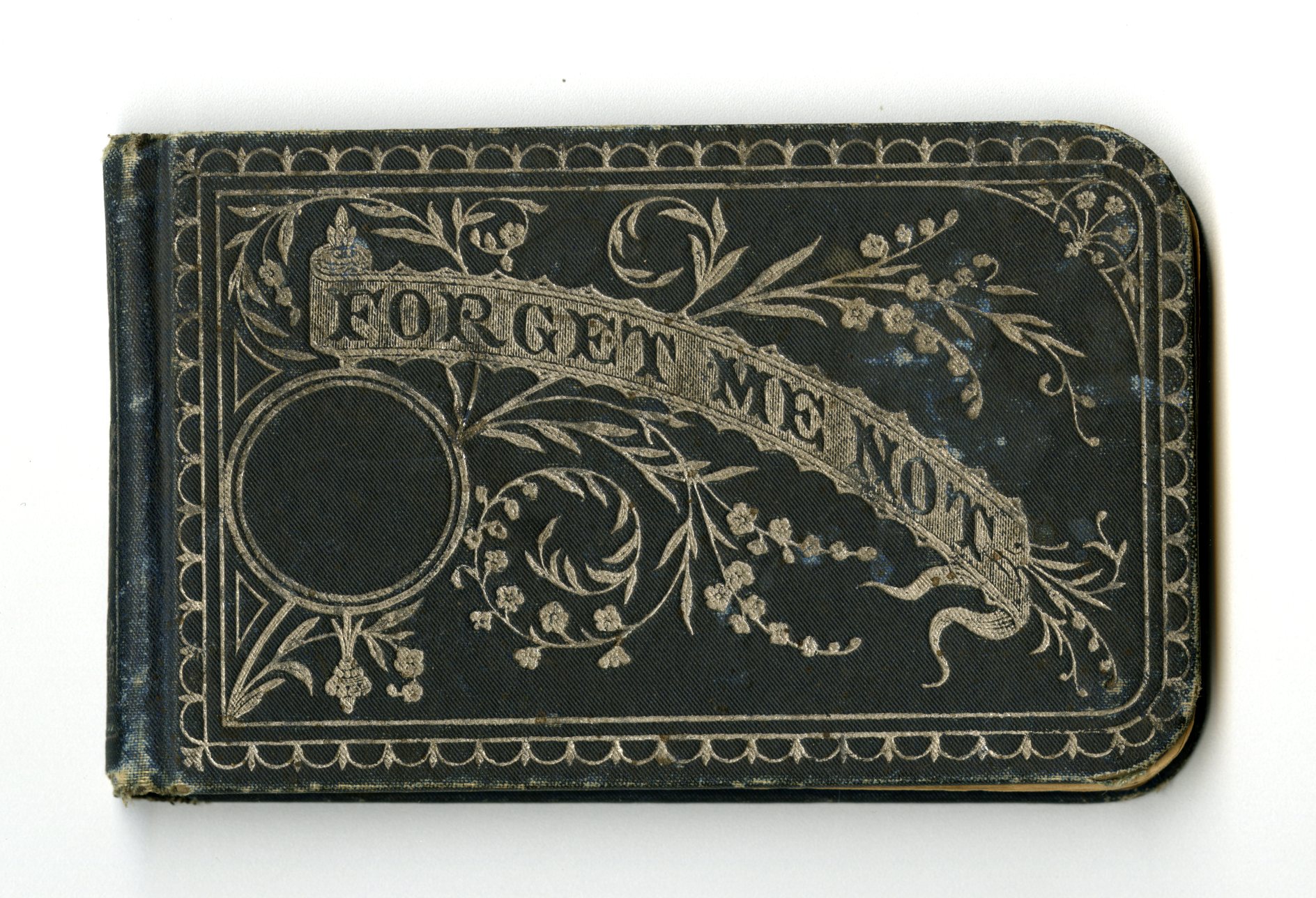