“President Wells would often have groups to his house for a meeting, open house, etc., and wanted a photo of the group to document the event, for PR, or to send a copy of the group to each of the participants. We would regale the group on the steps of the staircase in the foyer of his home, making sure to capture every face, and have auxiliary flash to supplement an otherwise somewhat dark scene. Wells was always on the front row, usually in the center of the group. The trick was to get everyone smiling and looking at the camera, so Herman would say something like, ‘I think my profile would look much better, if these two ladies would stand a little closer.’ Everyone of course would laugh, and that was my cue to trip the shutter. We always managed to get an excellent group picture!” – William B. Oglesby

We all are told many stories throughout our lives by family. Memories of the past told with the hope that a lesson will be taught or that the shared experience will bring about a closer bond. This is a story of how two journeys crossed paths. In 1935, Indiana University decided to establish the Audio-Visual Center (it would be later called Photographic Services) in an attempt to document the University’s history through visual media. The institution did this mainly through photography, and graduate students often assisted in fulfilling photo orders for various groups in and around campus. In 2000, the photographic negatives that were created as a result of this work were transferred to the Indiana University Archives and added to the photograph collections. The thousands of images are presently being digitized and uploaded online in the Archives Photograph Collection.

The story begins with William B. Oglesby, a graduate student at Indiana University from 1958-1961, who worked for Photographic Services as a photographer. He took hundreds of photographs covering a wide variety of topics during his time there. He told me stories about his experiences, such as the quote with which this post opens. I suppose this is the part where I should mention he also happens to be my grandfather. My part in the story actually starts with these talks I had with my grandfather. It was early 2016, and I had just informed him that I would be heading to Indiana University to pursue my MLS. I knew vaguely that he had gone to IU for his Masters in Audio-Visual Studies, but I never inquired deeply about it and it had never come up in conversation. Later that fall when I told him I was working in the Indiana University Archives with the photograph collection, he casually mentioned he had shot some photographs for Indiana University (not mentioning in what capacity) and that if I had time I might see if the Archives had any. His expectations were low, but I looked into it. 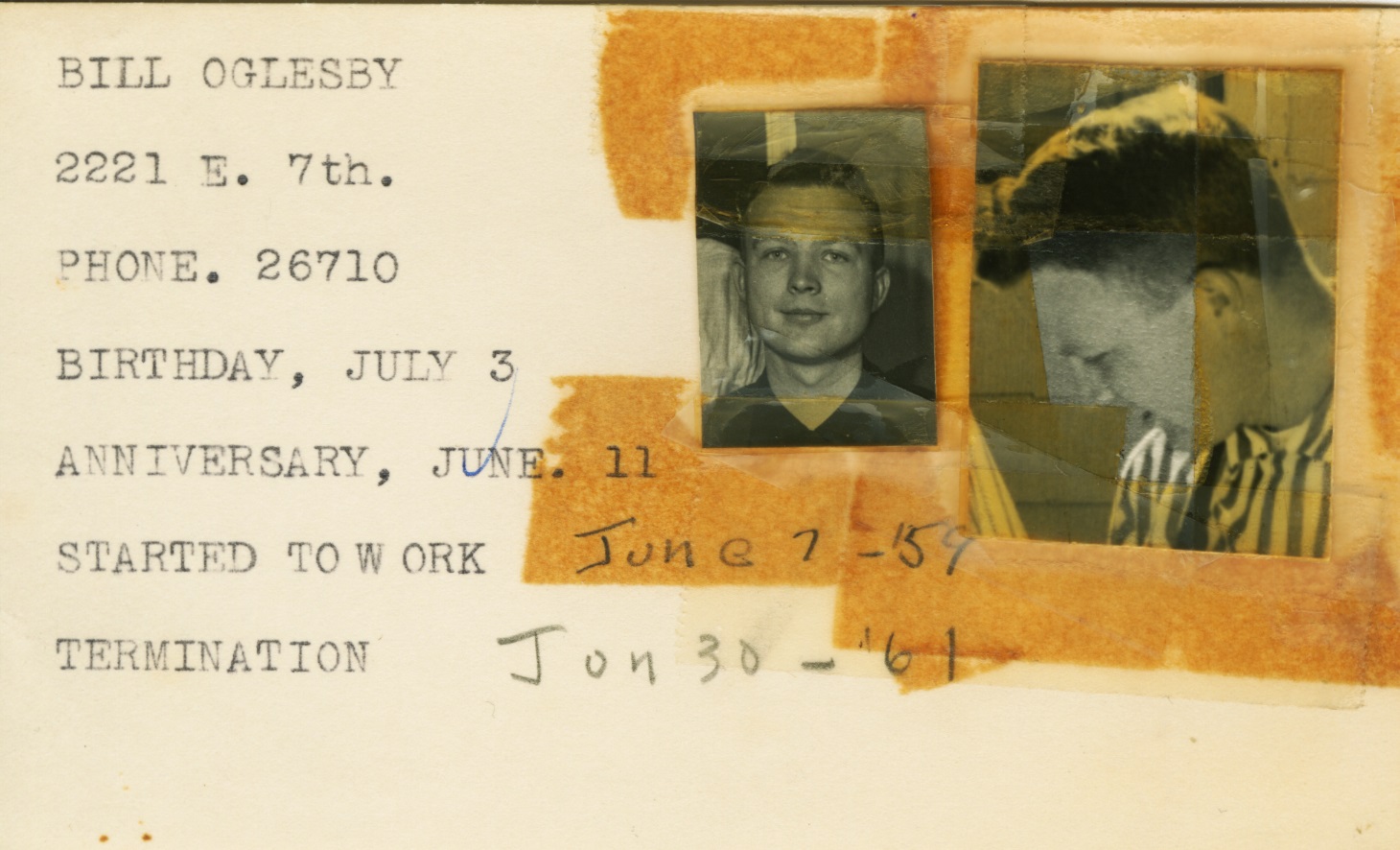 As you can probably guess, I found them…a lot of them, over 1400 images in fact. It started with my supervisor showing me the employee cards of people who worked in Photographic Services and from there it was a matter of just going through the correct dates in the collection and finding all the image envelopes that had “Oglesby” written on it. I scanned all those images and by Fall 2017, all of the images were available for viewing online in the Archives Photograph Collection.

It was about this time it was suggested to me that I conduct an oral history with my grandfather as part of Indiana University Bicentennial Oral History Project. I accepted and interviewed him in January 2018, where I learned all about his time at IU and the stories behind the photographs I had just digitized. It was this interview that inspired me to tell his story, and I happened to be planning an exhibition at the time. I took the opportunity to curate an exhibition using my grandfather’s photographs and implementing quotes from his oral history for context.

I find that photographs have the unique ability to document moments in time and capture emotion, since they are both a historical object and a form of art. When paired with oral history, the tale behind each image provides new perspective and greater appreciation for that captured moment. “Through the Lens: Documenting Indiana University Bloomington Photographically,” is an exhibition that takes these concepts and puts them into practice.

The images cover a wide range of topics including: To discover what it was like to work for Photographic Services from a student perspective and what was going on at IU during this time, please visit  “Through the Lens: Documenting Indiana University Bloomington photographically,” in person before Monday, July 9th, 2018!

The exhibition is located at: