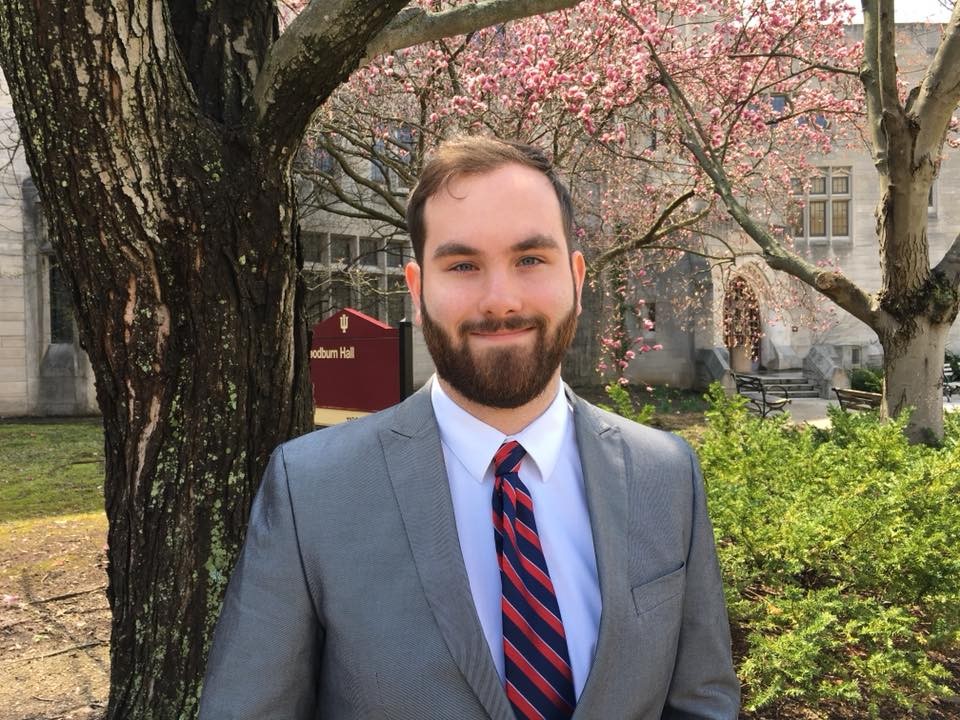 Duncan King, Undergraduate in the College of Arts and Sciences

What is your role in the IU Archives?
Duncan assists in the extensive task of digitizing items that are part of the University Archives collection.  These items vary from entire subject folders of important faculty and alumni papers to collections of documents on specific topics.  Duncan also helps with patron and researcher needs by scanning requested items, such as articles from old student publications, or the CV from a lecturer who visited IU nearly a century ago.  That’s pretty amazing when you think about it!

What is your educational background?
While many of the student workers at the Archives are MLS graduate students, it’s not unusual to have students from other backgrounds as employees. Duncan is currently an undergraduate just finishing his freshman year.  He is a student in the College of Arts and Sciences’ Department of Central Eurasian Studies (CEUS) and is working on his degree in Tibetan History and Culture. Next year he plans to continue his education closer to family in California.

What previous experience do you have in archives?
During high school, Duncan spent much of his time in the school’s darkroom and photo lab.  While poking around the library storage closet, he found a bag containing photo slides from the mid-seventies.  During his senior year, he undertook the task of scanning and uploading the slides so that they were accessible to alumni.  Many of the photos showed the racial conflict and unity that existed in Seattle’s inner-city high schools during that time period.  Duncan found joy in knowing that his work was helping to preserve the scenes captured in these long-forgotten images.

What attracted you to work in the IU Archives?
Duncan’s attraction to the Archives was inspired by the previously mentioned digitization project. “I’ve always had a love for history,” says Duncan, “so working in the archives was a perfect way to combine that interest with a newfound passion for preservation. Documents come with their own challenges and victories, and I’ve really enjoyed learning how to tackle a new medium.”

Favorite item or collection in the IU Archives?
With the extensive number of items in possession of the IU Archives, it’s never easy to pick just one as a favorite, and Duncan agrees that this was a rather tough question to answer.  Nevertheless, he managed to decide on an item.  There exists in the collection a letter from the then Interim President Herman B Wells to Governor Paul V. McNutt (also the namesake of McNutt Residence Hall).  In this letter, Wells essentially states that he is uncertain of his ability to handle the presidency, and asks McNutt to relieve him of it. Duncan explains why he chose this item in the following statement: “I love this letter because it adds a very human dimension to the legend of Herman B Wells; knowing he had to overcome some adversity, that he had to work to win the love of the university he would spend the rest of his life at, makes me respect him even more.”

What project are you currently working on?
Duncan’s current project focuses on digitizing some of the papers of Kate H. Mueller, who served as the Dean of Women from 1937-1969.  These papers were created during her first few years of service, and show the history of a very different time at IU, and the restrictions regarding female students. “Many of the documents relate to privileges such as staying out past curfew (lights out at 11:00 for freshmen!), or the problem of fraternity men keeping everyone awake.”  Apparently, fraternity members would spend their nights serenading female students into the hours of the early morning.  “What’s most clear in the documents is how much Dean Mueller cared about the students she was responsible for, as she and President Wells worked together to help struggling students stay in school and make the grades they needed to remain enrolled.”  These documents certainly sound like they would be worth a read! To learn more about this collection, see the Dean of Women’s Office records!

Favorite experience in the IU Archives?
Every day opens Duncan to new experiences; each one his favorite.  “I know I’m going to learn something new about my university, and I have absolutely zero idea what that something might be!”

What is something you have learned about IU by working in the Archives?
The University Archives plays a crucial role in preserving the history of Indiana University.  There is something for everyone to learn at the Archives, whether the individual is staff, student, or a member of the community.  Student workers, in particular, learn many things about university history or practical knowledge of their studies.  What Duncan has learned has a very practical element.
“Honestly, I’ve been astounded at the amount of paper the University used to go through. Imagine every email, every short text or memo, or update on the progress of a project; not only did it need to be sent by paper, but a copy needed to be delivered to each recipient. The university still uses paper, don’t get me wrong, but we no longer need a sheet of paper just to acknowledge you received someone else’s sheet of paper that they sent you.”