We recently received a reference request concerning an exchange student from England during the 1930s. This spurred research into an interesting exchange student program that Indiana University had just begun at the time. Although we don’t have much information on the student the original reference request was about, we do have a letter from the IU student who went to England.

Fraternity exchange plans began in 1935-1936 with the Phi Delta Theta fraternity chapter at IU. They provided a German student with free room and board, and the university gave the student free tuition. The next academic year, a student from IU went to Germany and received free room, board, and tuition. In the 1937-1938 academic year, the Board of Trustees (see the May 18, 1937 Trustees minutes) in conjunction with three fraternities offered free tuition, room, and board to a Swiss student, a German student, and an English student.

Gilbert Bailey was the IU exchange student to University of London Southampton in 1937-1938. Originally, an English student was to come to IU the same year, but delays from the University of London Southampton kept him from coming until the following academic year. That student was Terence Lane. He attended IU and received room and board at Phi Delta Theta for the 1938-1939 year. In the letter below to Paul Feltus, the editor of the Bloomington Star, in 1937, Bailey writes,

The officials of the university here have received the plan enthusiastically and are already making plans to submit the idea to the English National Students’ Union in the hope that the plan will be extended to include exchanges between many English and American universities. It is only because the idea is new here that more time is needed to complete the first American-English exchange. 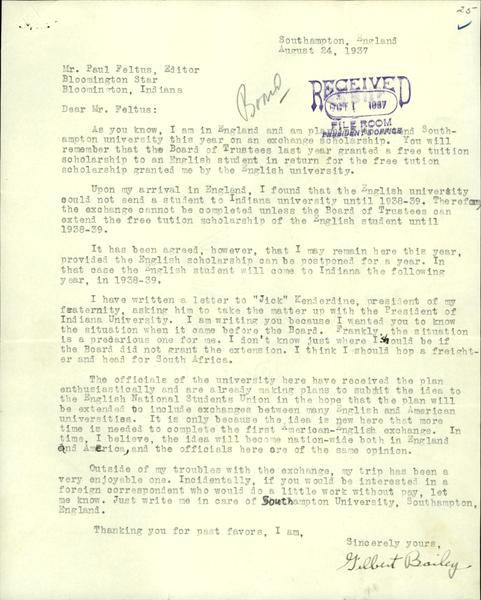 Bailey received good reviews as a student from the University of London Southampton. Bailey went on to encourage more university exchanges. While he was a student at IU, he was a member of the IDS staff. He was from Delphi, Indiana.

When Bailey had gone to study in England, the university there was supposed to send one of their students to IU. However, they were unable to do so until the following academic year. That student was Terence Lane. He attended IU and received room and board at Phi Delta Theta for the 1938-1939 year.