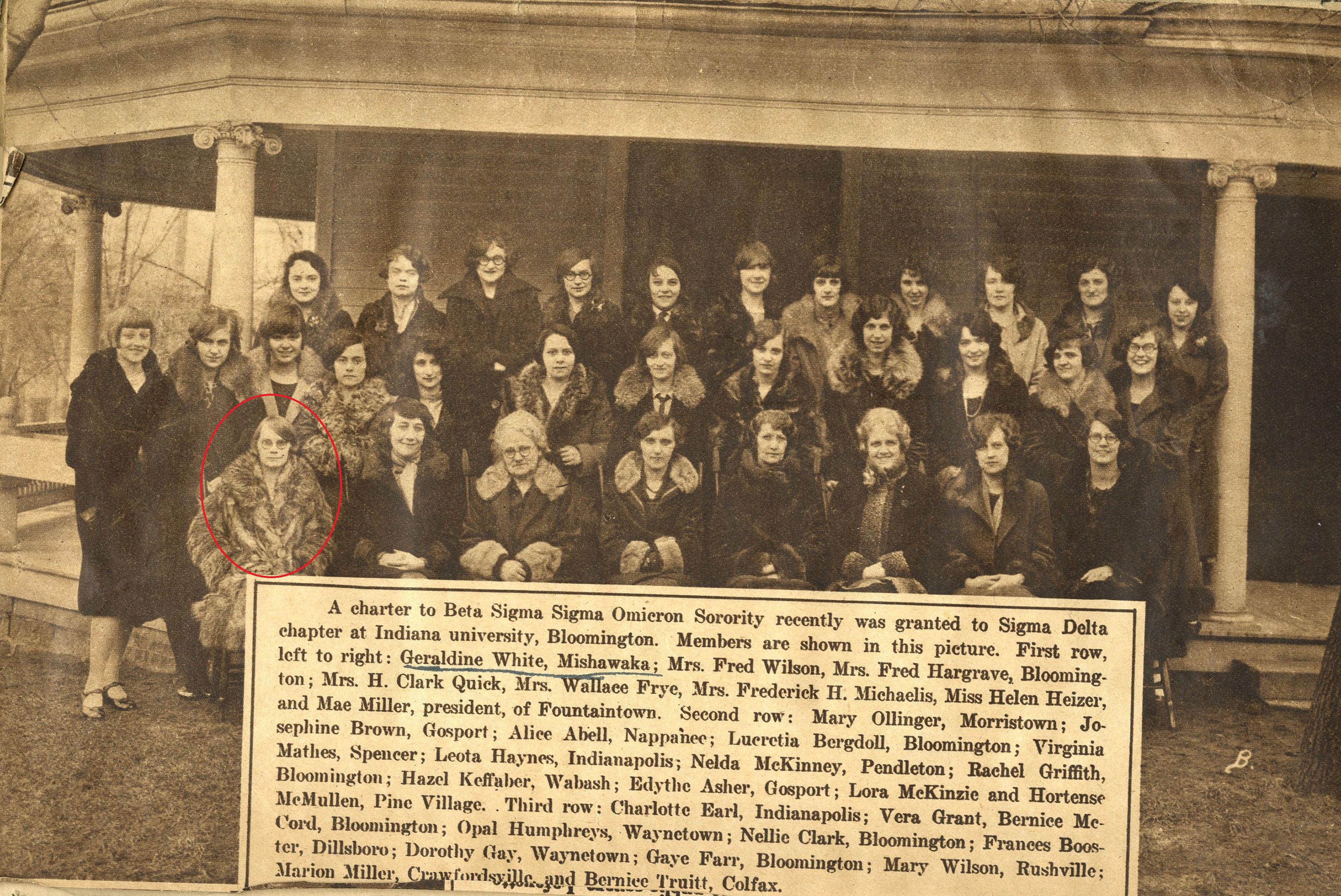 In a previous post, the Archives announced the papers of Geraldine K. White were open for research.  In this post, we hope to give our readers a closer look at Geraldine’s life on campus. Geraldine, or “Jerry” as she was fondly referred by friends, kept detailed records of her time at IU through notes from her classes and the creation of scrapbooks.

Researchers can glean a lot of information about her social life at IU from looking at the latter of these items. Many of the scrapbook pages are plastered with sports schedules, dance cards, programs from music and theater events, invitations to parties hosted by the Dean of Women, by-laws and pamphlets from various organizations and sororities, and much more. Geraldine was clearly very heavily involved in campus life as a whole.

Another thing that stands out in Geraldine’s scrapbooks, however, are references to three houses: the Kirkwood, the Beta Sigma Omicron chapter house, and the Westminster Inn. She seems to have spent much of her time in these locations.  The scrapbook is filled with notes from friends, most of which seem to have some connection to these places as well. 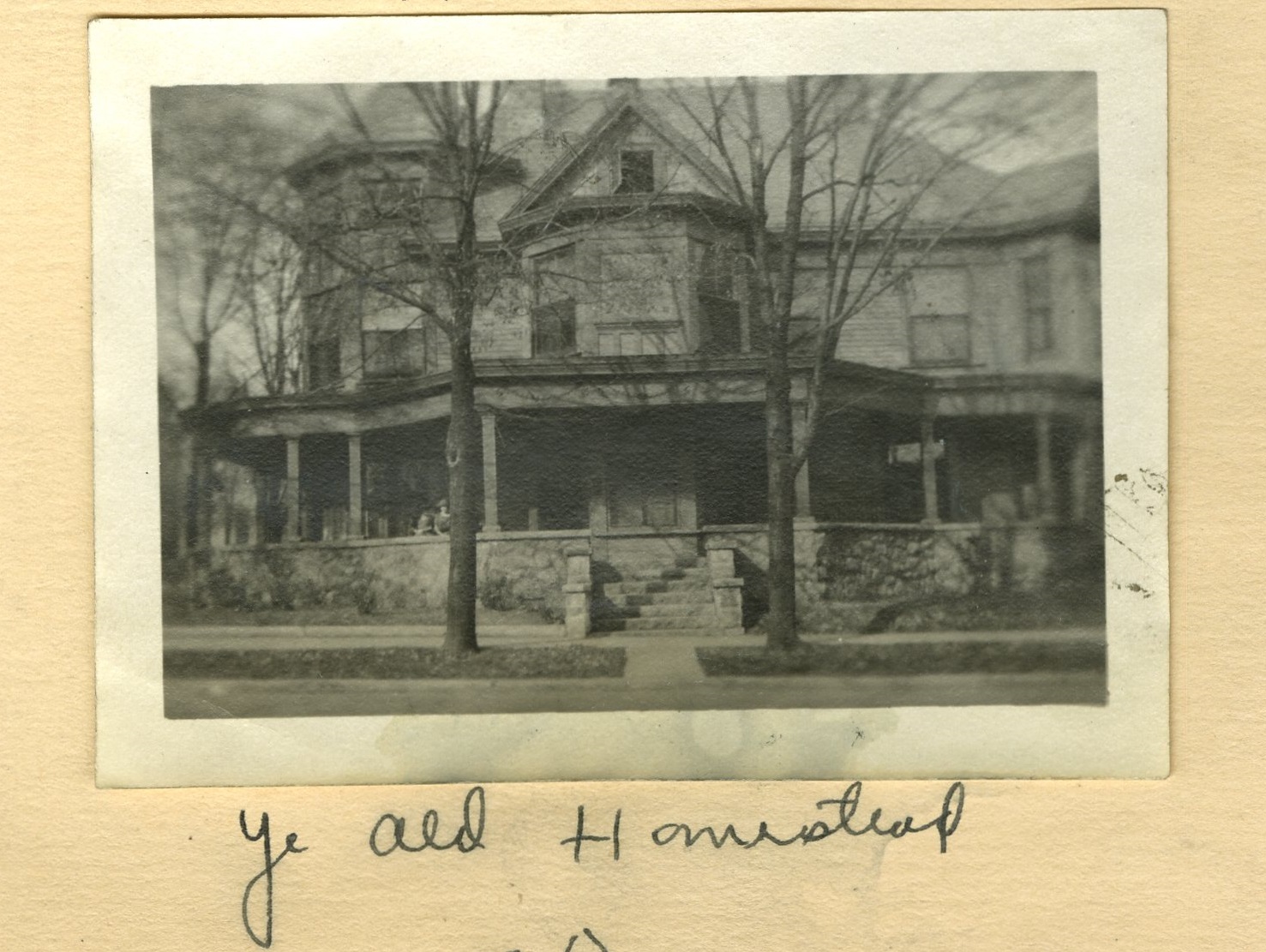 This mansion, which was located at 301 East Kirkwood, was designed by architect Milton Pritchett in 1897 and stood on the north east corner of Lincoln and Kirkwood.  The property was demolished in 1967 in order to make room for the site that would eventually become the current-day Monroe County Public Library. In its early years it served as the home of Calvin R. Worrall, a local lawyer. The house was then taken over by several fraternities Delta Tau Delta (around 1898), Lambda Chapter of Sigma Chi (around 1903-1904), and Delta Upsilon (around 1920). Later on in the 1930s it operated as a jazz bar and then as a doctor’s office during the 1940s-1960s (the practice of a certain Dr. T. L. Wilson).

During Geraldine’s time around the mid-1920s, it served as a women’s residence. Geraldine seems to have lived there from 1922 to sometime in 1924.  Afterwards, she moved into the newly built Memorial Hall, IU’s first women’s dormitory (which was dedicated in October of 1924).  The scrapbooks contain numerous letters from Geraldine’s friends regaling us with stories about the Kirkwood House whether it be sneaking around the house late at night while the chaperone slept, reading Sherlock Holmes with her roommate, or recounting the shocking moment when the bed next to her fell through the floor into cellar…

Geraldine also spent a great deal of time at the Alpha Beta chapter house of the now defunct Beta Sigma Omicron sorority, which was established during her senior year. She joined as part of the inaugural pledge class in Spring of 1926.  The sorority was founded on December 12, 1888 at the University of Missouri by three women: Eulalie Hockaday, Martha Watson, and Maude Haines; the sorority was absorbed by Zeta Tau Alpha on October 3, 1964. Multiple members of Beta Sigma Omicron left notes for Geraldine in her scrapbooks. Geraldine herself included a picture of the BΣO house that seems to have been cut out of some sort of reference book or magazine: 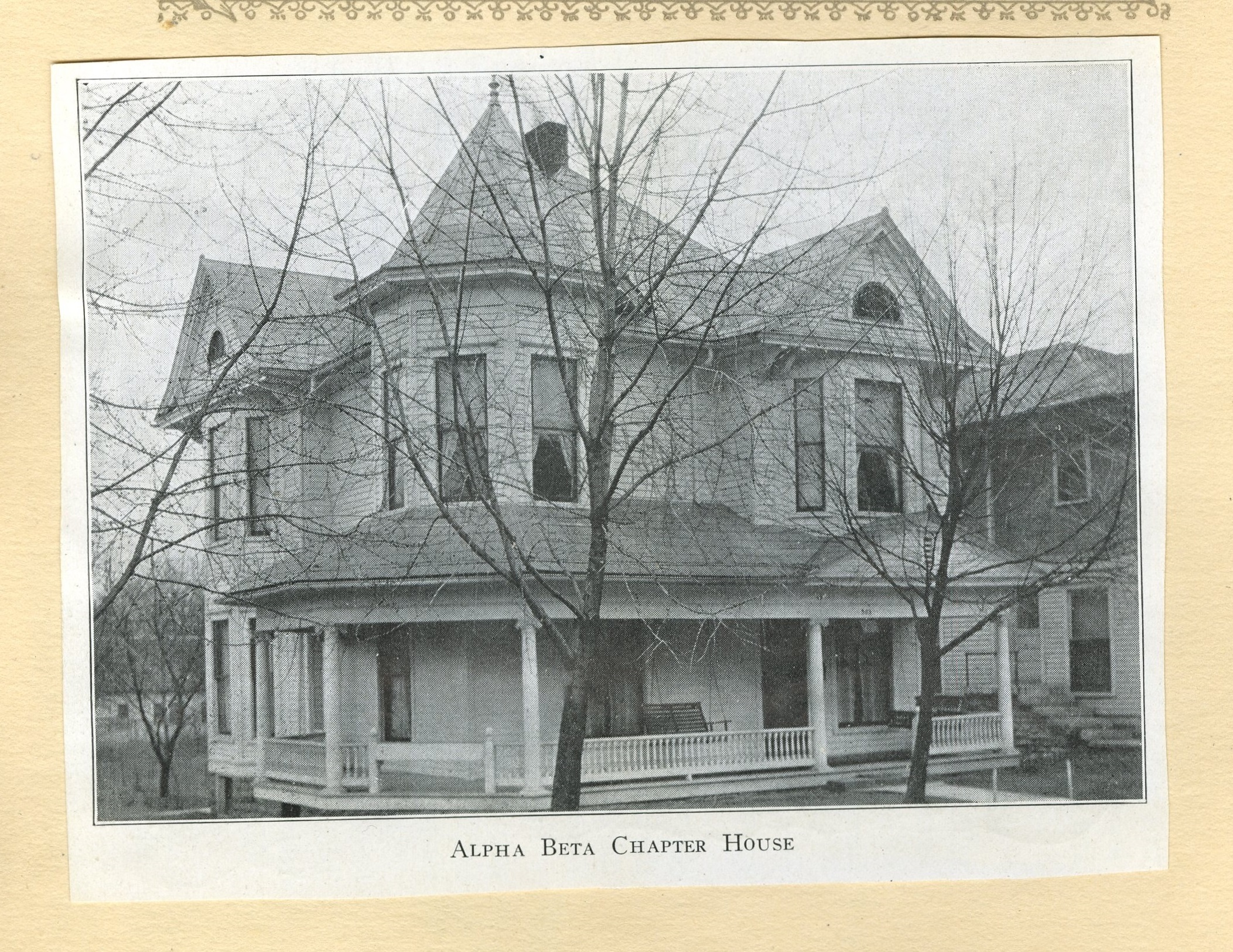 The house moved from 503 Smith Avenue to 420 So. Fess the summer after Geraldine graduated. The new property was sold to BΣO by the Theta Chi fraternity on June 28, 1926. Geraldine also includes a picture of the new location for the house on the same page: 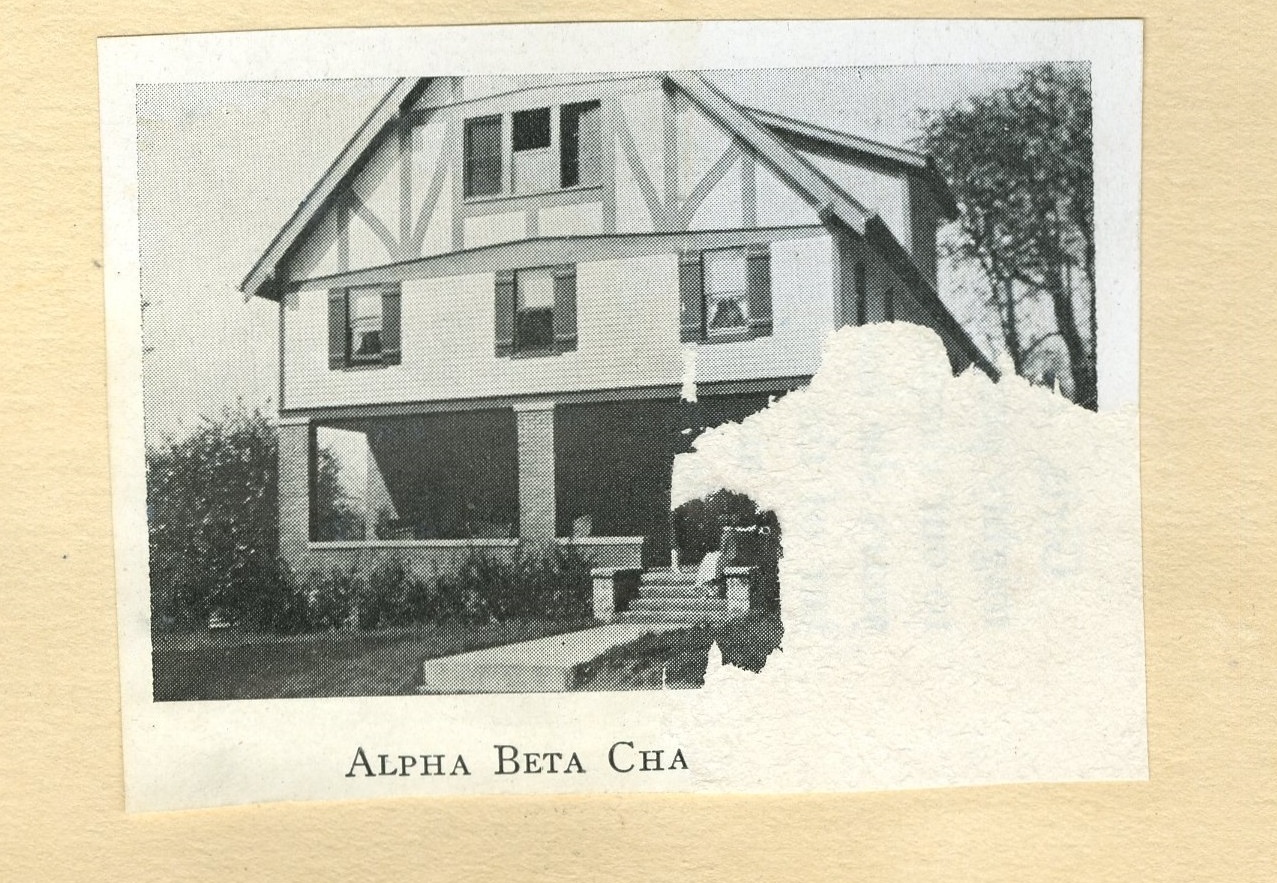 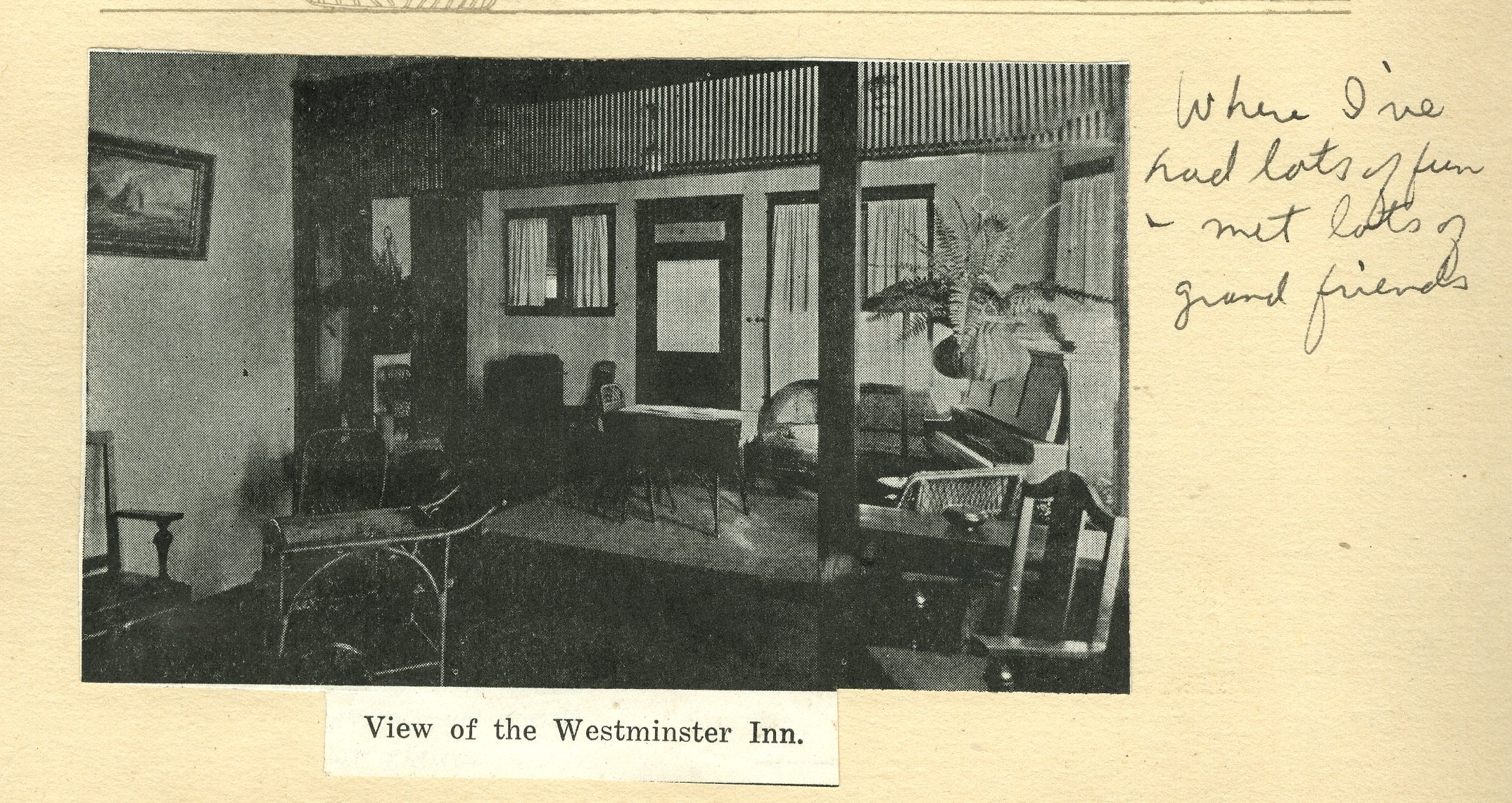 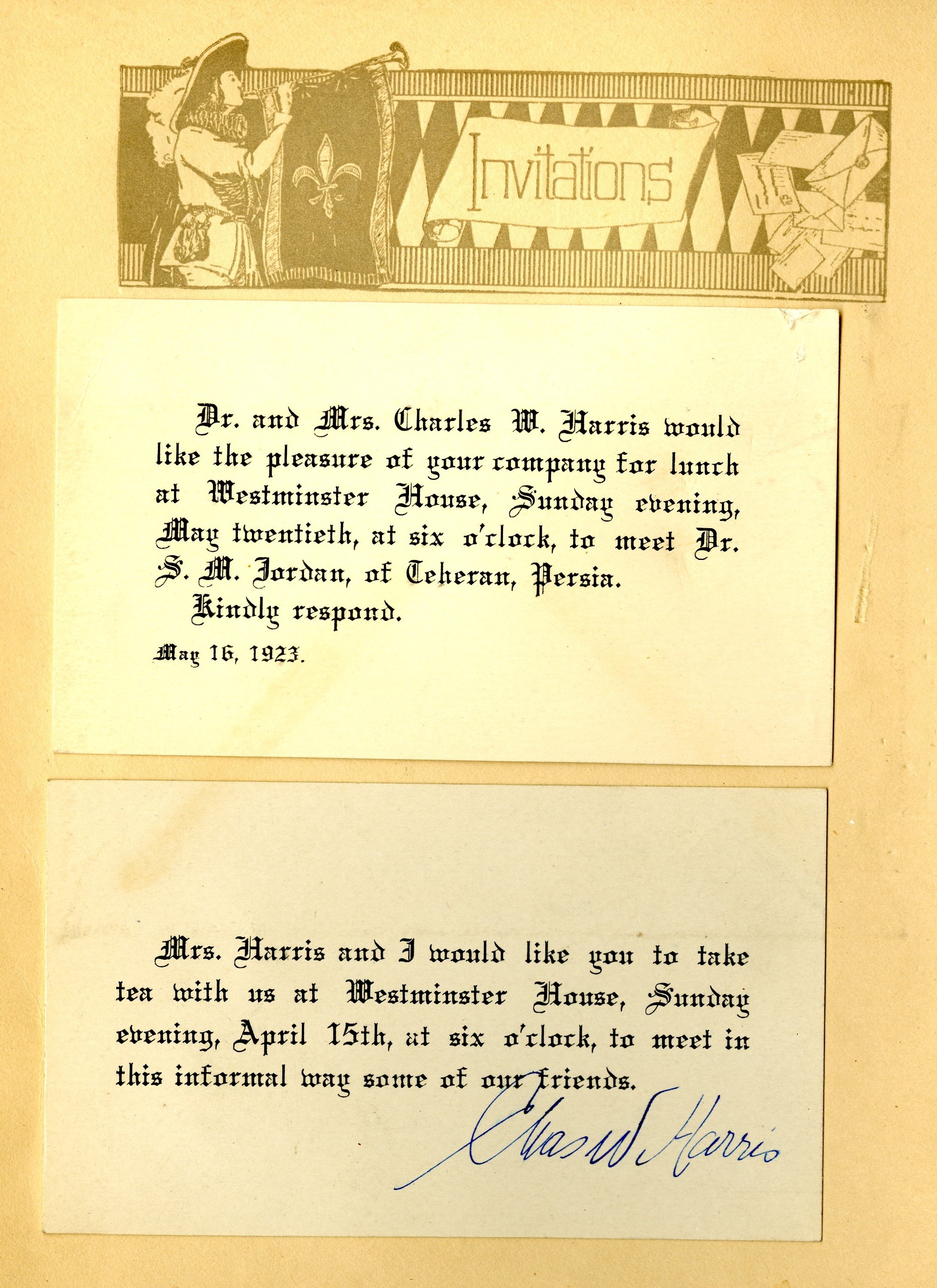 Invitations to events at the Westminster Inn, from Geraldine’s scrapbook

During Geraldine’s time at IU, the house was under the management of Rev. C. W. Harris, who served in France as a chaplain for the American Expeditionary Forces during World War I.  From looking at the scrapbooks, Rev. Harris’ wife seems to have enjoyed hosting students quite often whether it be for tea, dinner, farewell parties for seniors, or special events.  One particular page displays an invitation to meet Dr. Samuel Martin Jordan, an influential Presbyterian missionary in Persia. 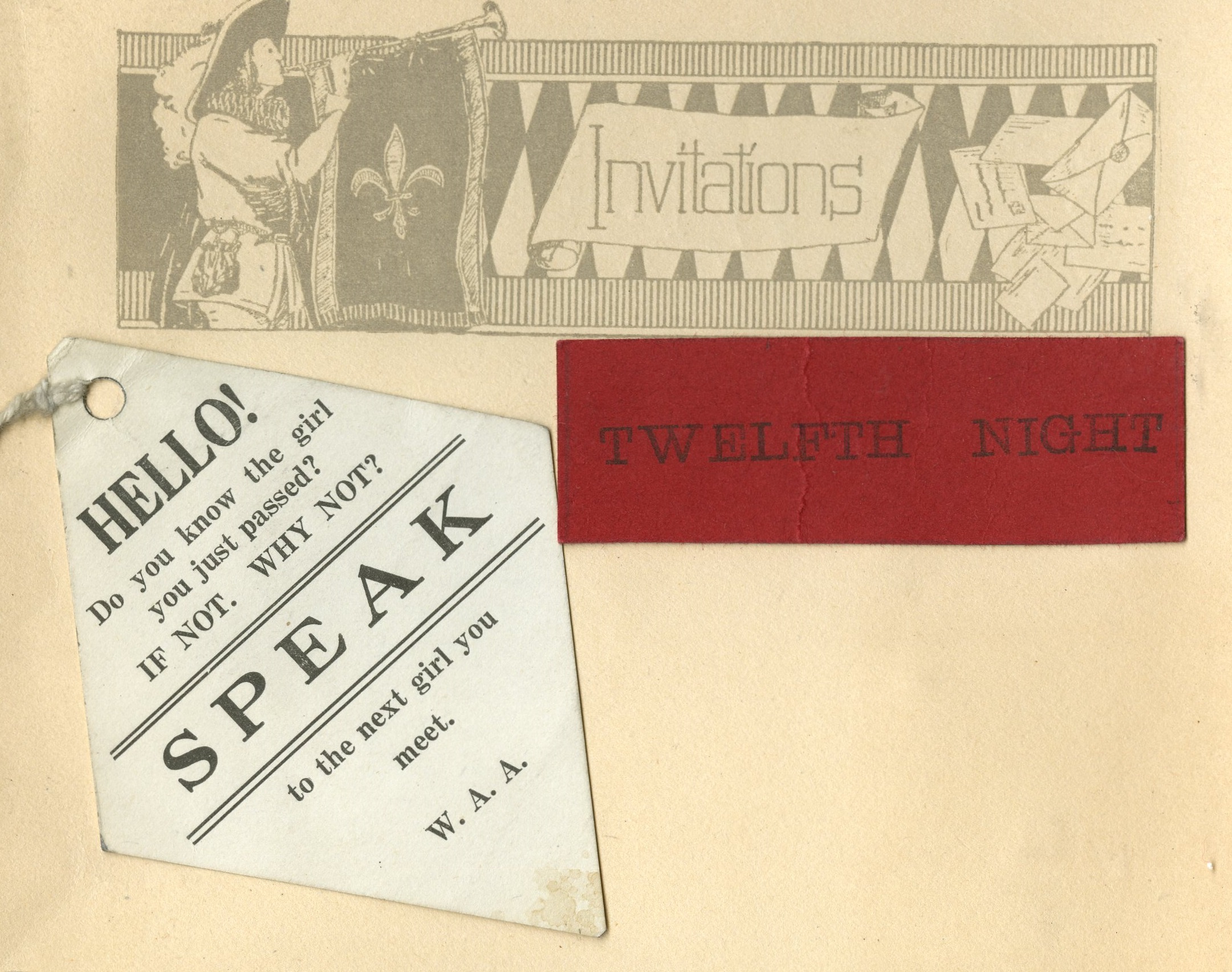 The group that frequented the house even organized a play.  There are references in the scrapbook to Shakespeare’s “Twelfth Night.” Geraldine’s roommate from sophomore year at the Kirkwood house, Mabel, seems to have been involved with the play and mentions it in one of her notes in the scrapbook. The Westminster Dial of March 1928 confirms that the Westminster House put on a play of the Twelfth Night.

If you would like to see the scrapbooks or other items from Geraldine’s time here at IU contact the IU Archives to set up an appointment!  The archives also has several other student scrapbooks in its collection including those created by Kathleen Cavanaugh, Emma K. Schmidt, John Lincoln Nichols, Margaret Werling, and many others. Each documents a unique perspective of student experiences at IU.