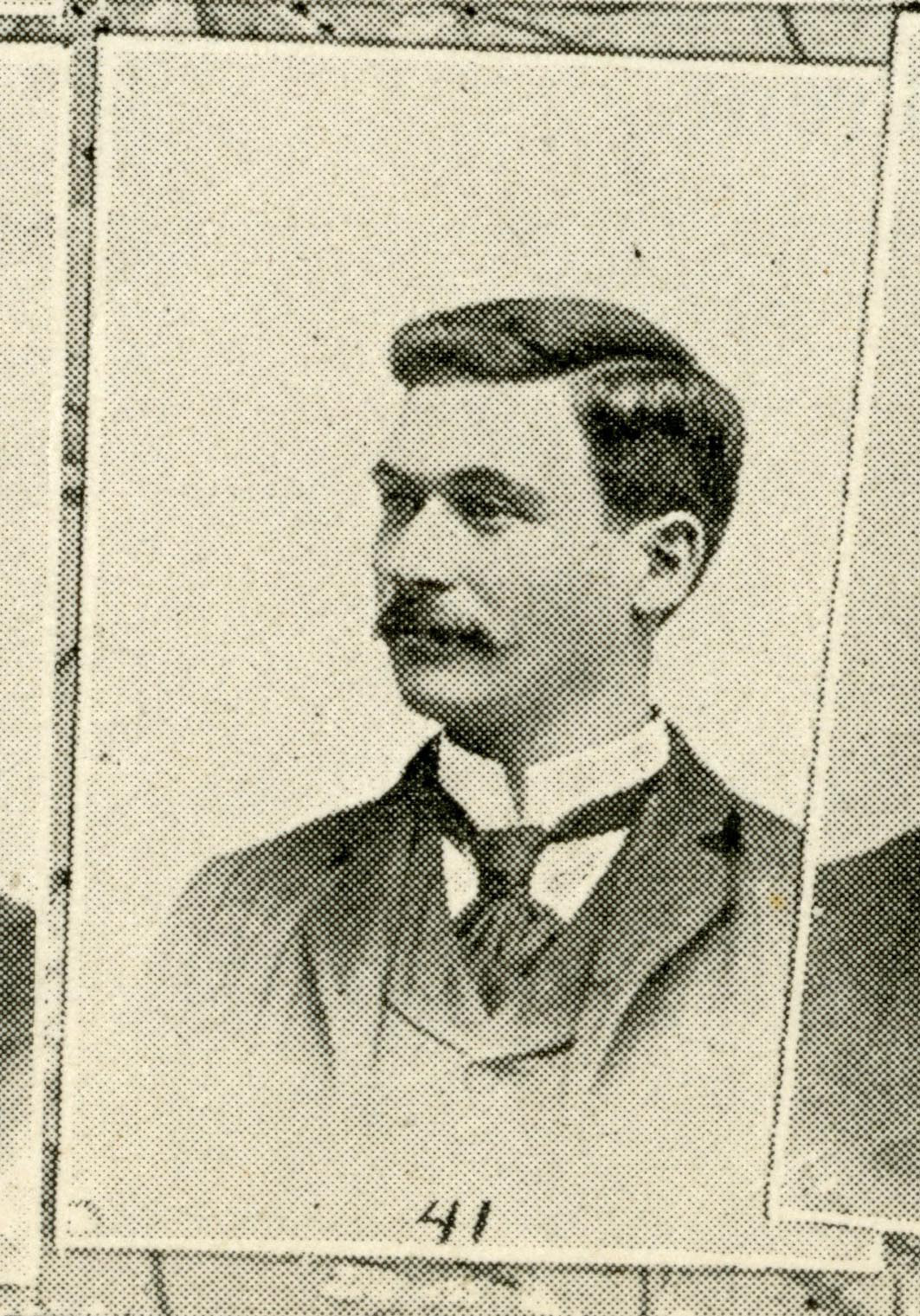 In this Sincerely Yours post, we will explore Indiana University and Bloomington through the eyes of Daniel W. Biddle, a student at IU between fall 1893 and spring 1895. Biddle was born on October 24, 1870 in Benton County, Indiana, and lived in the state his whole life. While in Bloomington, Biddle wrote frequently to his parents, as well as his friend Janie Bartee, whom he eventually married. These letters, recently donated to the University Archives by Biddle’s granddaughter, are a rich source on daily student life as well the “removal” controversy that rocked the university during his attendance.

In many of his early letters, Biddle describes his settling into campus. Biddle writes about his room on North Walnut Street that cost $1.50 per week “with everything furnished but wood and light”, and where he received his board, a half-mile away, for $2.25 per week. Two cords of beech and sugar tree wood at the time, according to Biddle, cost $4.00.

A reoccurring theme in all of Dan Biddle’s correspondence is how heavy his workload was.  Some of his courses included Latin, geometry, algebra, philosophy, physics, chemistry, poetry, and rhetoric. Due to this heavy courseload, Biddle’s daily schedule was as follows: wake-up at 5 or 5:30 AM, study until breakfast around 7:30, attend class until 1:00 PM, eat lunch, then study until retiring for bed around 9 or 10 PM, only breaking for supper. It seems as though D.W. Biddle did find time for leisure, however. In several letters, Biddle describes attending a lecture in Indianapolis by Joseph Cook and the annual contest of the Intercollegiate Oratorical Association of Indiana. Biddle also attended freshman “scraps,” which took various forms over the years – capture the flag, burning of books, or flatout brawls – all in good spirits, of course.

The 1890s saw many days off from school for birthdays and holidays, these included George Washington’s birthday and even the death of a trustee or the registrar. Additionally, sick days were a plenty. On more than one occasion, Biddle was too sick to attend classes. Between the “grippe” and general illness, good health was not a constant for Dan Biddle. Even Janie, many miles away, suffered illness- she however made a quick recovery according to letters.

One issue that caused quite a stir on campus in late January of 1895 was the “removal question.” This was the idea of moving the Indiana University campus from Bloomington to Indianapolis. According to Biddle, many of the students supported the relocation, while the citizens of Bloomington opposed it. On January 27, 1895 he wrote Janie about the controversy in detail: 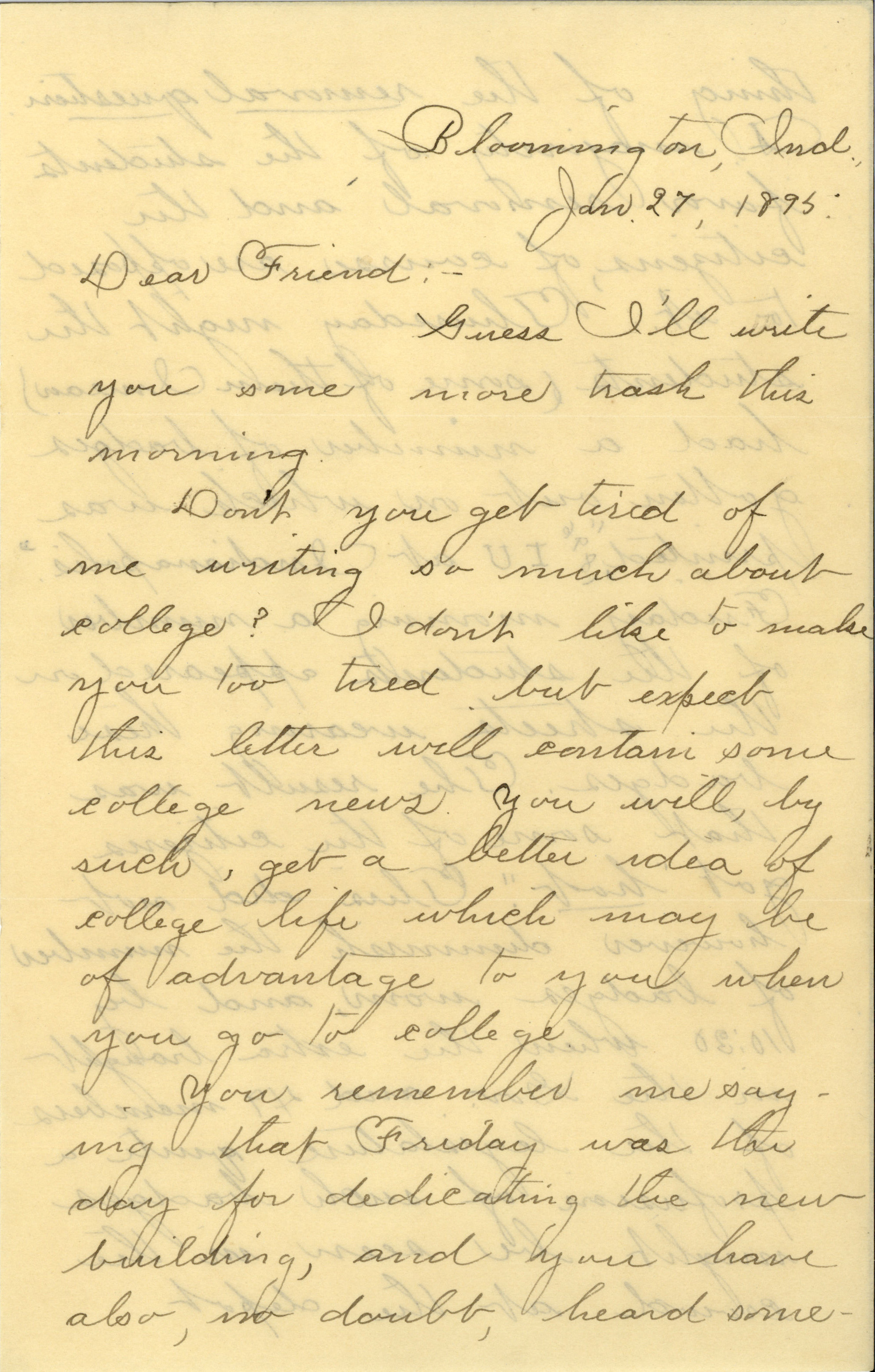 Guess I’ll write you some more trash this morning.

Don’t you get tired of me writing so much about college? I don’t like to make you too tired but expect this letter will contain some college news you will, by such, get a better idea of college life which may be of advantage to your when you go to college.

You remember me saying that Friday was the day for dedicating the new building [Kirkwood Hall], and you have also, no doubt, heard something of the removal question. A majority of the students favor removal and the citizens, of course, are opposed to it. Thursday night the students (some of them I mean) had a number of badges gotten out on which was printed “1896 I.U. at Indianapolis.” Friday morning a number of the students appeared on the streets wearing these badges. The result was that some of the citizens got “hot.” This did not however diminish the number of badges worn, and by 10:30 when the extra brought in the Governor and 49 members of the legislature quite a profusion of such badges might be seen in the crowd at the depot. Just as the train stopped and the guests began to get off the following yell was given – “Remove I.U.! Remove I.U.! You’re the men to put her through!!” Everything went along pretty quiet until p.m. when the students, faculty, and guests marched two abreast to the old college chapel. A part of the militia that constituted the guard of honor for the Governor lined up on each side of the entrance and removed all “removal” badges on nearly all as the students passed. There was some resistance offered in some cases, but no one was seriously hurt. The students have been somewhat aroused by the conduct of the militia, and I fear the thing is not settled yet.

The speeches from the governor and the some of the legislature contained remarks disapproving the removal of I.U. and brought forth loud applause from the citizens, and in some cases hisses from the students.

Senator Gifford made a speech in which he said: “This is not a fit occasion for the discussion of the removal question. I am not here as a politician, but am here to assist in the dedication.” He was loudly applauded by the students. Rather a roast on the Governor, I thought.

The meeting at evening was conducted largely by the students and was a very nice service, being almost entirely free from allusions to the removal.

I enjoyed myself very much in the evening., five of us Sophs got back in the back part of the house and made and gave yells roasting the Freshman, i.e. before services began. There were a few removal badges worn in the evening, and some of the citizens wore a card on which was printed “1896 I.U. at Indianapolis I don’t think.”

Oh! no, I did not wear a removal badge, neither did Eli, but I succeeded in getting one for a souvenir.

My! just see how much I have written on this. Are you tired of it? Perhaps you have read about it in the papers. I will enclose a program….

Ever your friend, Dan

Obviously, in hindsight we know that Indiana University remained in Bloomington. Dan Biddle left IU in 1895 and obtained his teaching license, going on to teach in Benton County, Indiana. He soon married Janie and had two sons with her. He would go on to hold jobs in insurance and banking through the 1930s, in which he would obtain positions such as secretary, vice-president, and director, all in the state of Indiana. He died January 18, 1954 at his home in Remington, Indiana, at the age of 82.

To read the fascinating Daniel W. Biddle correspondence, contact the IU Archives to schedule an appointment.