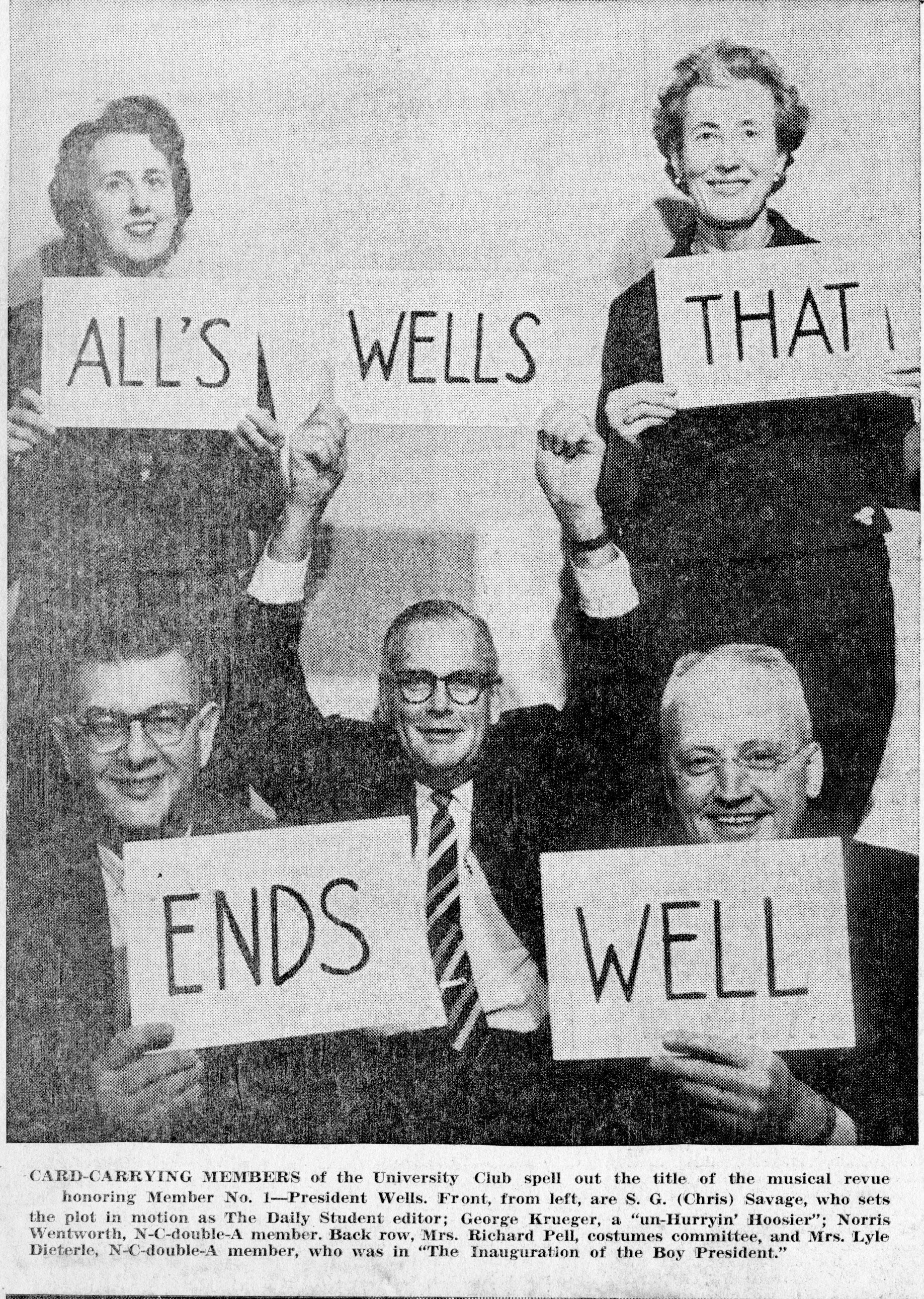 Card-carrying members of the University Club spelling out the title of the musical honoring Herman B Wells on the occasion of his retirement. Published in the Indiana Daily Student on March 16, 1962

Herman B Wells was one of the most prolific presidents in the history of Indiana University. Even before his presidency, he was an alumnus of IU as well as a member of the faculty. His 25 year-long presidency lasted from 1938 until 1962, covering the second World War and its aftermath.  He was also the first Chancellor of Indiana University starting from his retirement in 1962 until 2000, the year of his death. As a life-long citizen of Indiana and an alumnus of the university, he was invested in its development and its impact on the world at large. He was a champion for intellectual and academic freedom during the time of Alfred Kinsey’s research and an advocate for international studies and communication during and after war-time. 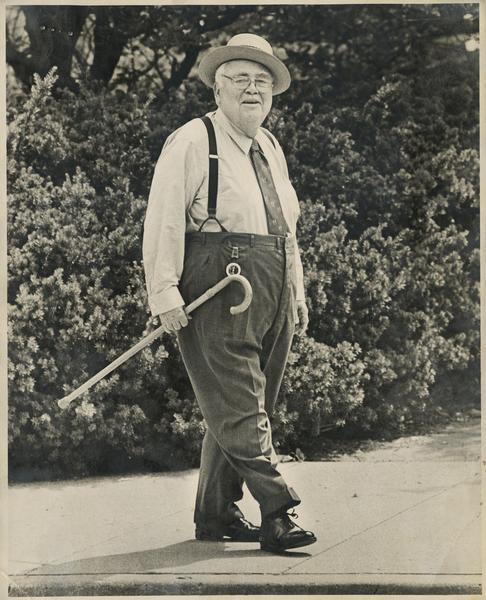 A photo taken by Mr. Rick Wood as Wells was walking to work on May 28, 1977. For more information see the Archives Photograph Collection Item P0023858.

At the end of his presidency, Eleanor and Newell Long, professors of English and Music respectively, wrote a musical titled “All’s Wells That Ends Well” as a tribute to Wells on the occasion of his retirement. This was not the first time the Longs had created a musical for Wells. They also wrote and composed “The Inauguration of the Boy President” for the beginning of Wells’ Presidency back in 1939.

“All’s Wells That Ends Well” was performed by over 100 members of the faculty’s University Club on March 16, 1962 in Alumni Hall. It included songs such as Wells Bells, The Chimes of Indiana by Hoagy Carmichael, Our Herman B Wells, and Just B Yourself! (What Does the B Mean?). A recording of some of these songs from the musical can be found in the Archives’ collection. The Bloomington Daily Herald-Telephone described the musical as “…a lively production, full of laughs, in which faculty members set aside their dignity for the evening.” (March 17, 1962, Sec. 1, Page 3) 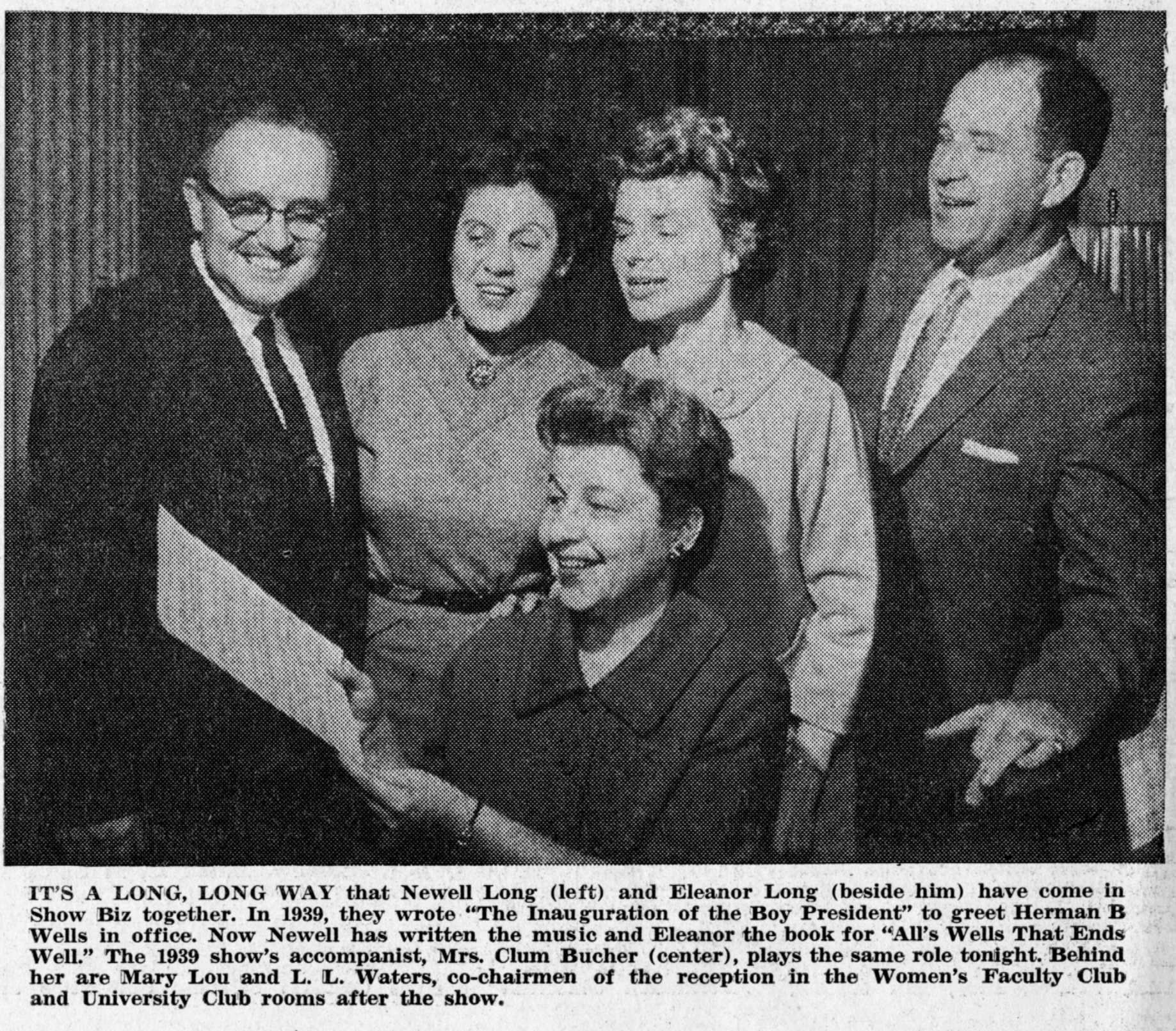 A photograph published in the Indiana Daily Student about the musical. Features Newell and Eleanor Long on the left.

The story follows two “freshmen” trying to find out what the B in Herman B Wells stands for. They journey through the sacred halls of the Lilly Library, guarded by the monkish librarian, Ballantine Hall, the Jacobs School of Music, and even the University Archives (how very meta!). The answer, as it always does, lies with Wells’ Secretary. The freshmen discover that it actually means “Be yourself”! In reality, the B doesn’t stand for anything, but it makes for a good laugh.

This musical tells us a lot about what people thought about Wells. The song “Our Herman B Wells” in particular lists several of his virtues:

“…Loyal and true to all good Hoosiers.

Works hard and steady on this big job.

He fights hard for both the old and new.

His plans have bought us fame and more good will,

Brought IU to the light.

For him we all would fight, our Herman B Wells… 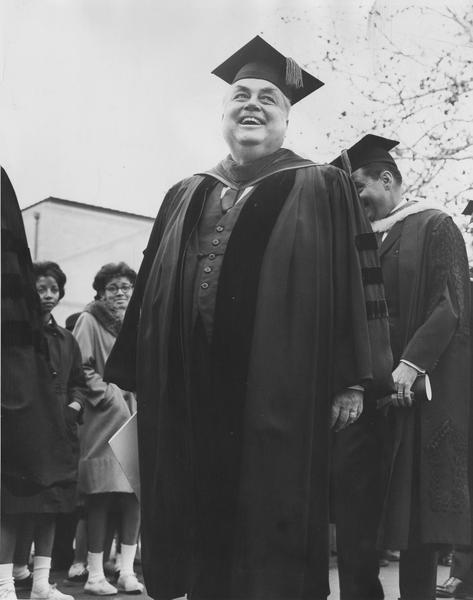 brilliant as any brain,

humble and easy as an old shoe,

he runs college business without strain.

He could at poker win with just a pair,

this man’s skill you don’t disdain.

the best school in the state. 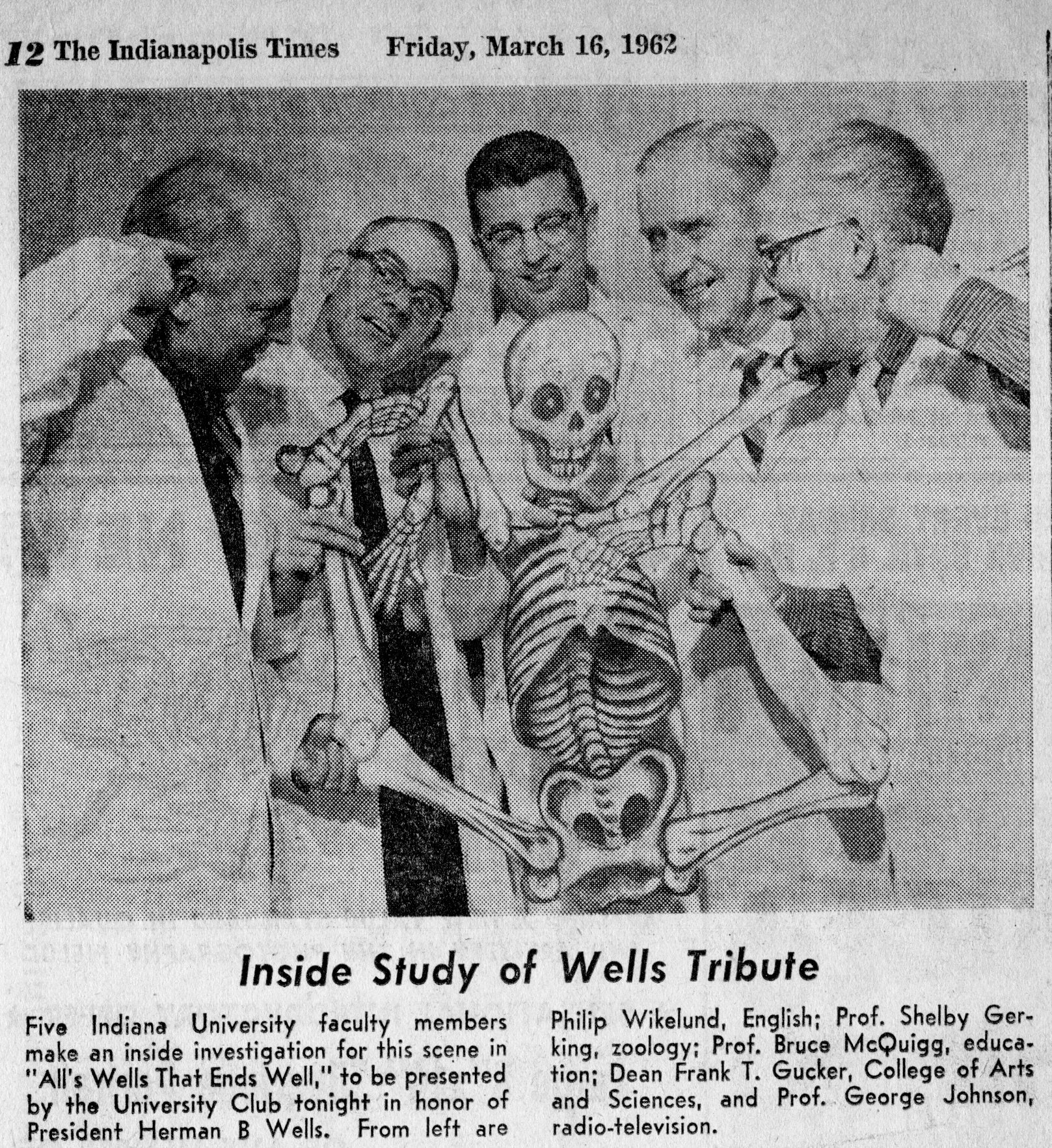 Members of the IU Faculty in their costumes for the performance of “All’s Wells That Ends Well.” Published in the Indianapolis Times, March 16,1962.

This musical also reveals that he has a sense of humor. From the exaggerated librarians and faculty to the various depictions of students, it is clear that the faculty believed Herman to be more than capable of having a good laugh.

In the end though, perhaps the greatest thing we learn about Wells is that he was always, honestly himself. As a role model, it’s not a bad legacy to leave behind.

“…Be yourself, just be yourself

Be yourself from day to day

Be yourself, just be yourself

That’s the Herman B Wells way

He avoids all ostentation

No pretense or affectation;

He assumes no pose to please,

He has natural poise and ease.

All these things endear the man.

Emulate him if you can.

Be yourself, just be yourself; 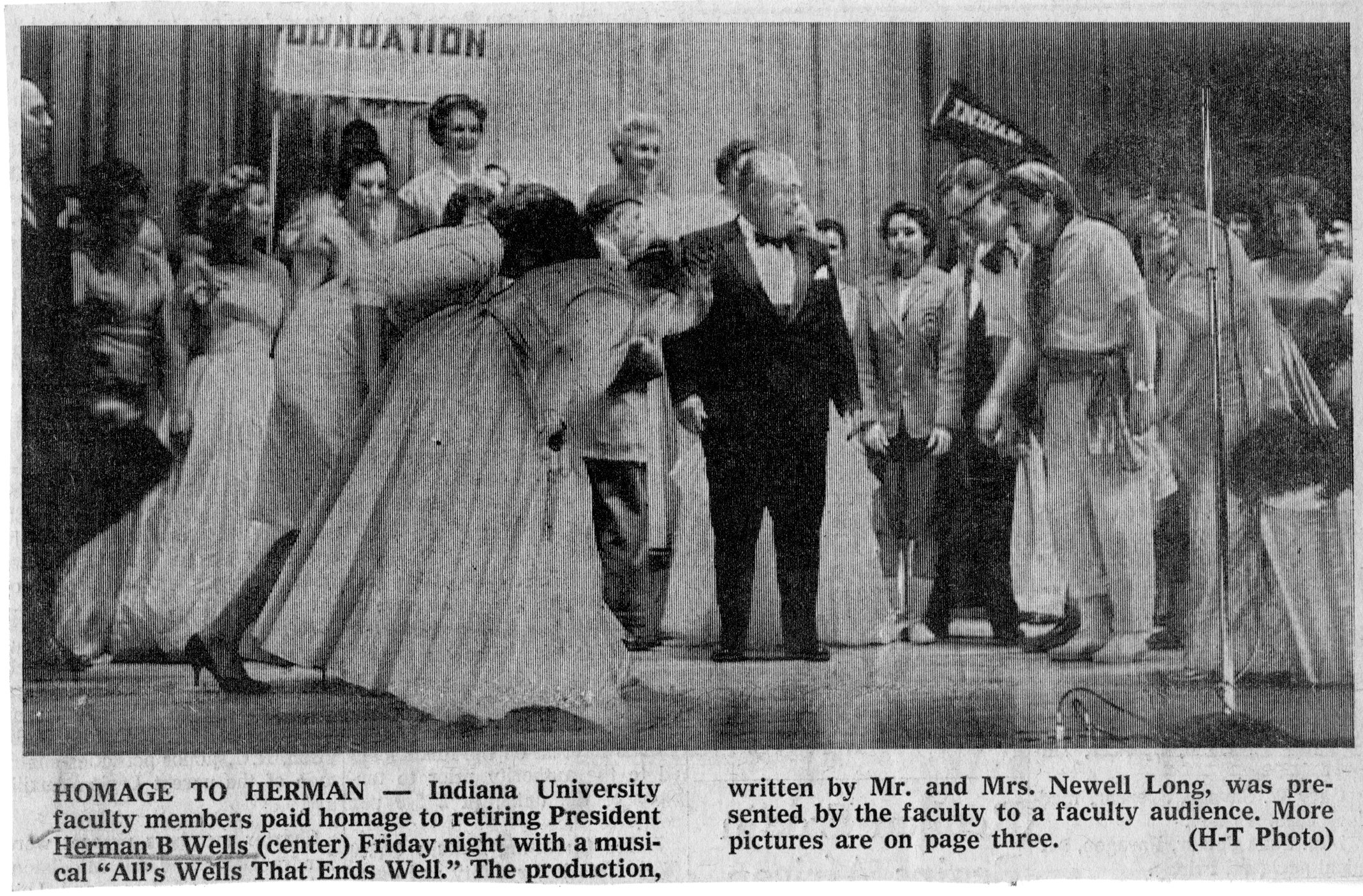 Herman B Wells (center) onstage with the cast after the performance of “All’s Wells That Ends Well.” Published in the Daily Herald-Telephone March 17, 1962.

Wells commented on the musical, that “They invested enormous energy and effort in this show. It was delightful, light, happy, and yet, quite moving. I shall never forget it” (Being Lucky: All’s Wells that Ends Well, Track 1, 6:40-7:06).

Those remarks are just a part of the many dictations Wells made in preparation for his autobiography, Being Lucky, which was first published in 1980. As part of the Media Digitization and Preservation Initiative, IU has digitized these tapes, all of which are available now on Media Collections Online. A newer, more complete edition of Wells’ autobiography is expected to be released next year, in time for the bicentennial IU Day. Read the whole story here.

To learn more, visit the Indiana University Archives or check out the following links:

The IU Archives’ Newell and Eleanor Long Show files, including scripts and music for “All’s Wells That Ends Well”