When I think back to starting my freshman year of college (in enemy territory at Purdue University), I remember one main feeling: overwhelmed! Even though it has been more than a decade since then, I get butterflies in my stomach when I recall orientation activities, my first meals in the dorms, and meeting classmates for the first time. Though Purdue had a ton of welcome activities for incoming freshmen, the Indiana University traditions of Freshman Convocation and the Freshman Induction Ceremony are utterly charming. This year, the Freshman Induction took place August 21 at Skjodt Assembly Hall. We’ve covered the history of the Freshman Induction Ceremony in the past, so in this post I would like to focus on some wise words spoken at Freshman Convocations over the years. Specifically, this post will highlight Herman B Wells’ resolute and poignant addresses over the World War II years. His advice should be relevant for all freshman coming to Bloomington now, in an uncertain and overwhelming time. 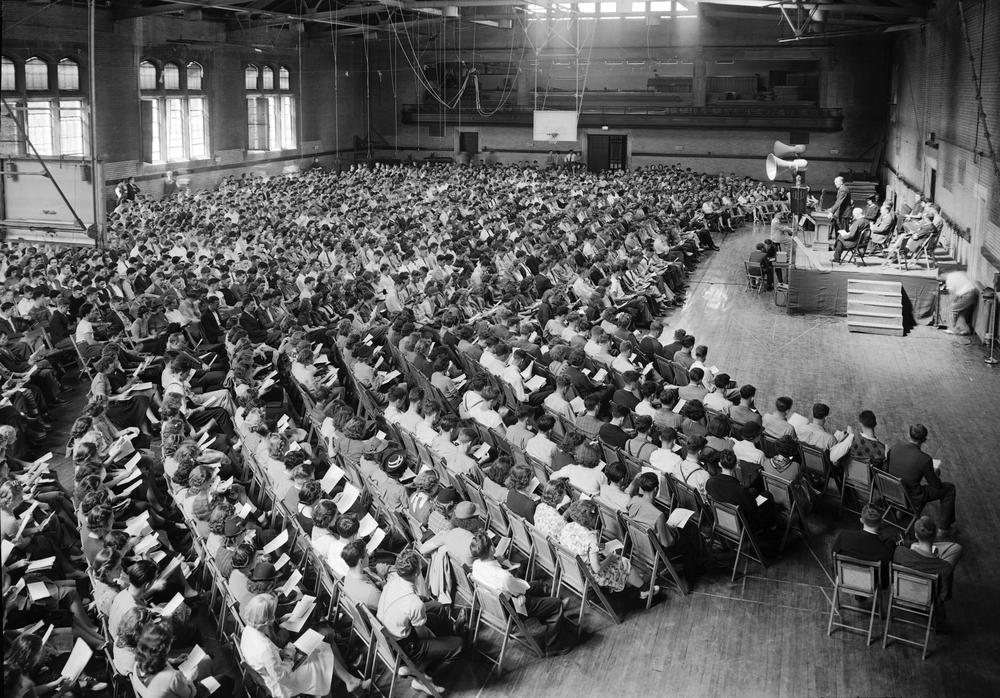 It is well known that our beloved Herman B Wells was a fantastic orator, so it is no surprise that his remarks are still impactful many decades later. During his 1937 speech to incoming freshmen, Wells reminded students of precarious conditions in America and the world:

“It is true that the world is beset with problems of such gravity that they sometimes challenge hope for the future. On the front pages of the newspapers almost every day reference is made to some of these problems—war, assault upon the democracies of the world by the rise of dictatorships, charges that the capitalistic system and the democratic philosophy of government are incompatible—in a word, questions that attack the very foundation of the institutions under which we are living.”

Pretty heavy words for the opening of a Freshman Convocation speech. He continued on to describe the depletion of natural resources and perilous state of natural conservation. He ended this section by saying:

“Wars, rumors of war, political unrest, dissipation of the vitality of our physical and human resources—certainly these create a dismal outlook for the future.”

Though these statements are grave, we can see obvious connections with our contemporary situation. Wells then placed the impetus for changing this outlook on the incoming freshmen:

“You need not be discouraged by the number and seriousness of these problems. They can all be solved, and they will be solved by our people if we are guided by an intelligent and informed leadership…And society, through government and through the sacrifices of individual families, has supported higher education generously in this country largely because we as a people believe that college-trained men and women offer us our best source of social, political, and economic leadership.”

One of Wells’ most extraordinary skills was to turn insurmountable challenges into inspiring moments of change. Against the backdrop of the rise of fascism (the Luftwaffe bombing of Guernica occurred in April of that year), Wells acknowledged the frightening realities of IU freshmen while simultaneously encouraging them to lead the charge for change. I hope the incoming freshman class today can harness this same courage. 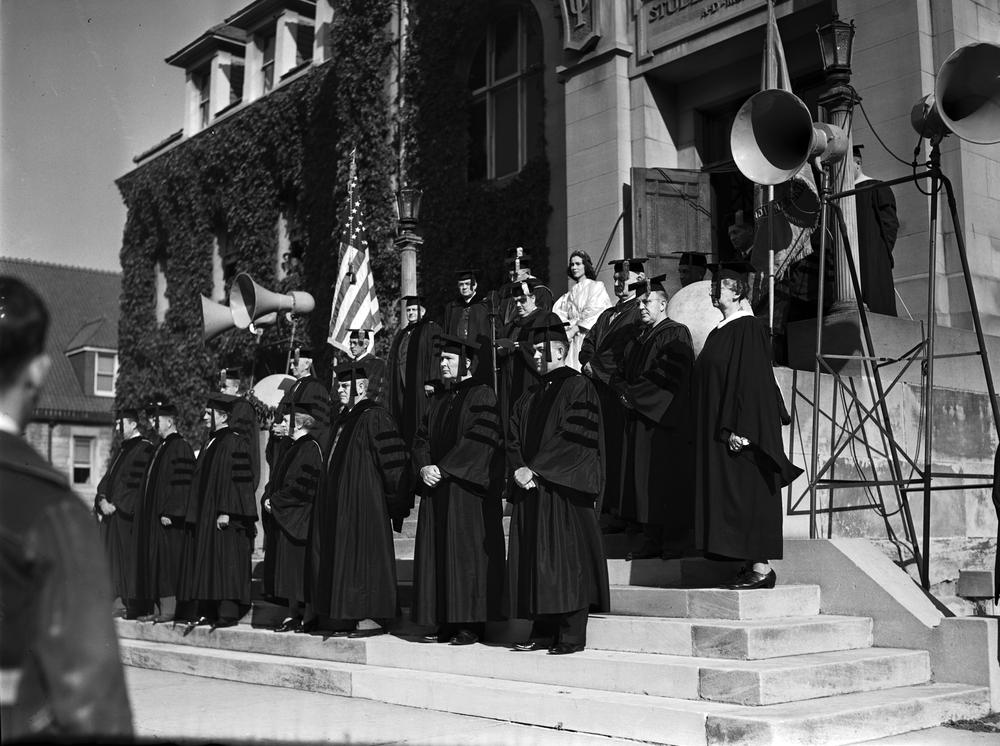 In September 1940, one year before the United States officially entered World War II, Wells emphasized the university’s role in defending democracy.  He outlined three types of defenses for democracy: physical, intellectual, and spiritual. After summarizing mobilization activities on campus such as Civilian Pilot Training at the Bloomington airstrip and IU’s R.O.T.C. unit, he spoke to intellectual and spiritual defenses:

“You cannot be intellectually lazy and be an effective citizen in democracy. There is no dictator to tell you what is socially desirable and undesirable. Questions of social policy must be thought through for yourself, and you must think with sufficient clarity and originality, if you aspire to be a leader, so that you can win your colleagues to your point of view.”

“Democracy is a way of life in which we are responsible for each other, in which our human relations must be governed, in a very real and practical sense, by self-restraint and mutual respect for the rights of others.”

In an age of rapid-fire and divisive communications I think incoming IU students would do well to embody mutual respect and feel responsibility for one another. We can update Wells’ words to apply to fostering a democratic society online, too. 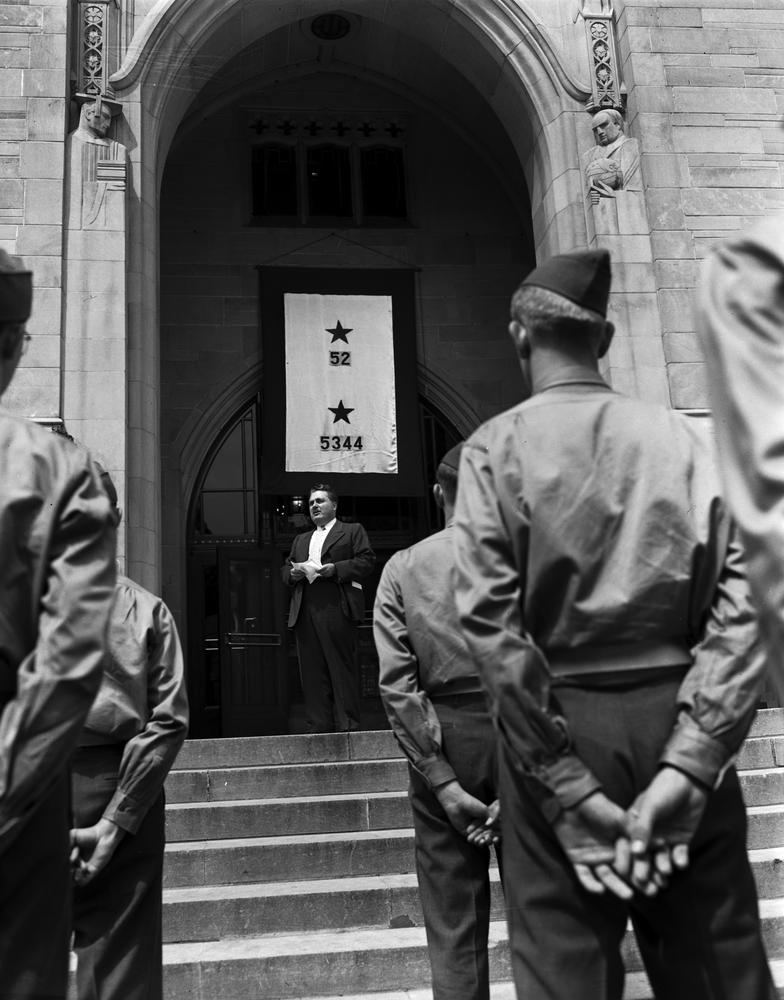 As the United States officially entered the War, we see a shift in Wells’ tone for incoming freshmen. 1942 was a particularly devastating year—by September of that year mass extermination of Jews had begun at Auschwitz, Sobibór, Treblinka, and Belzec; thousands of lives were lost as Axis powers sunk Allied ships during Second Happy Time; and Executive Order 9066 authorized the United States military to incarcerate Japanese Americans in detention camps. Wells’ 1942 freshman address echoed an atmosphere of severity:

“We hear much just now about the necessity of maintaining morale on the home front. These are days of unusual stress and strain for all of us. Home front morale will depend in no small measure upon our courtesy to each other. Acceptable manners, both public and private, insure proper consideration for the convenience and rights of others. Therefore this subject of good manners, always timely, is of especial significance at the present.”

Even in a dark hour, we see that Wells highlighted freshmen’s responsibility to treat others with respect and dignity. And as we can see from his 1946 address to the incoming class, that attitude continued after World War II as well. That year he remarked:

“The nervous system of the human body is a complex mechanism consisting of millions of cells. Yet a single nerve cell can register pain or pleasure which is felt throughout the entire body. Each person in the campus body, from the youngest student to the oldest professor, has an essential role. Each is, as it were, a cell in the nervous system of the University community.” 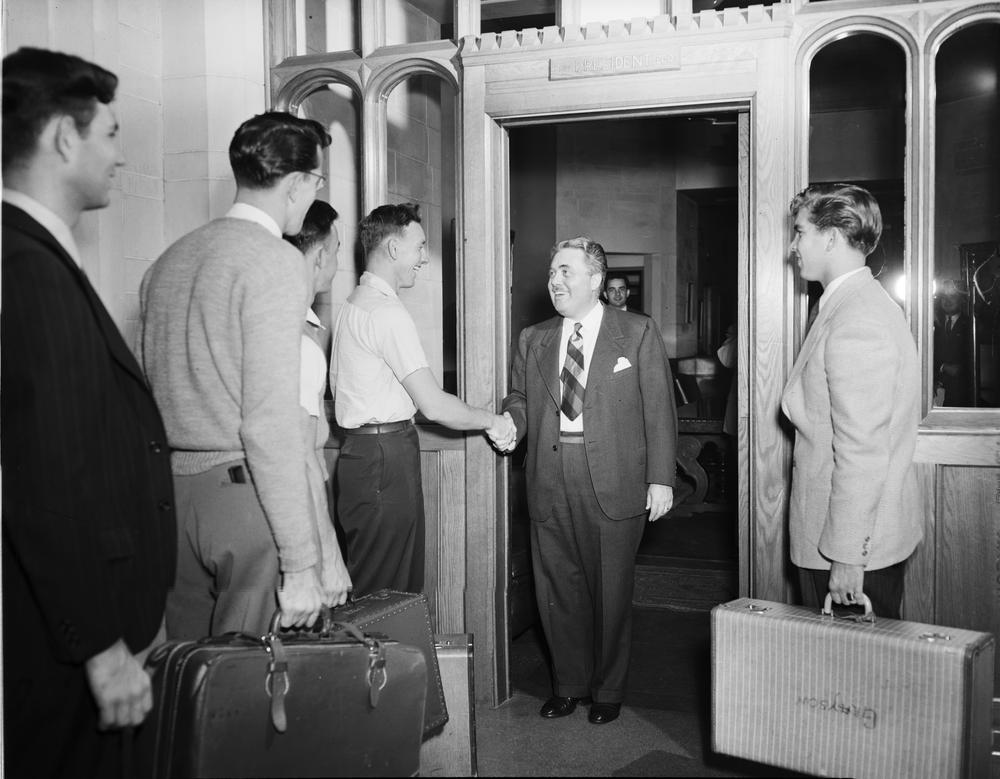 Herman B Wells welcoming World War II veterans who lived in the board room / conference room of the Administration Building during the postwar housing shortage, October 1946. IU Archives image no. P0023889

Cooperation and mutual respect were truly central to how Wells envisioned a democratic society. As the IU Class of 2023 settles in, I hope we all can exemplify Wells’ ideals to each other on and off campus. Most all of us were overwhelmed and frightened freshmen at one point. If Wells could set an example of strength against the backdrop of World War II, we should be able to pass these virtues on to the Class of 2023.

To see more transcripts of Herman B Wells’ speeches, check out the finding aid for Collection C137 or contact an archivist.