Article on VanFleit in the Garrett Clipper,
Monday, March 4, 1940

In 1940, Barbara VanFleit’s face appeared in newspapers across the state of Indiana. Headlines read “Garrett Girl is Elected Queen of Indiana Prom,” celebrating her win as an “unorganized” co-ed over Delta Delta Delta sorority president Virginia Austin by just five votes. She was the second consecutive independent to be voted queen by the boys of the junior class in the twenty-two year history of the event at IU. A junior studying home economics at IU, Barbara was no stranger to the Garrett Clipper’s pages. The daughter of an apparently well-respected electrical engineer, Barbara’s activities along with those of her siblings and step siblings were often recorded in the publication’s social pages. Donald Painter, a member of Delta Chi and a chemistry student – the king to Barbara’s prom queen- also frequently appears in these social pages, often in connection with Barbara.

The prom that year was to be themed after the film “Gone With the Wind.” According to that year’s Arbutus:

“The theme was carried out in the decorations by a replica of a Southern mansion, which formed the background for the band. The walls were artistically draped in Spanish moss, and the entrance to the hall was decorated in keeping with the Southern theme.” 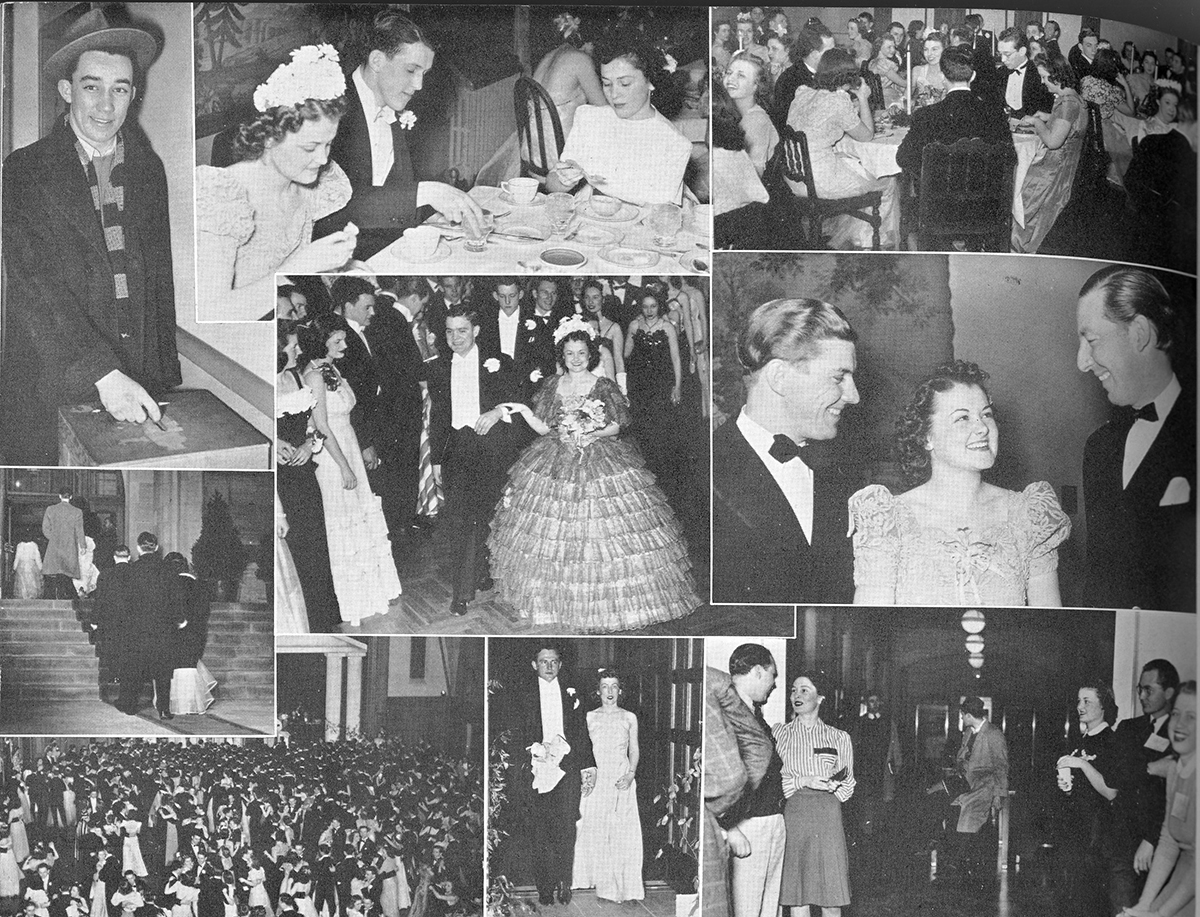 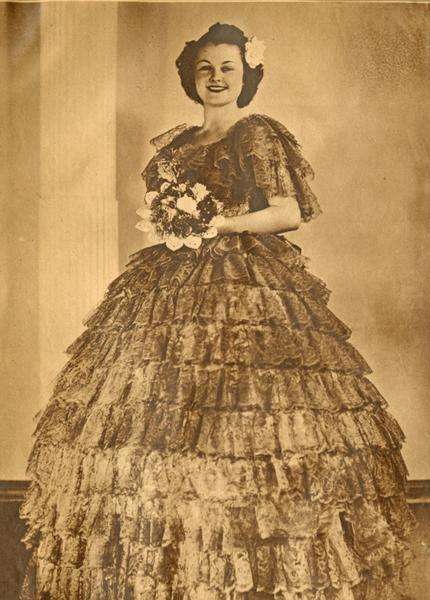 A unique opportunity came with the theme of 1940s prom – Barbara VanFleit appears in both the Arbutus and the Collegiate Digest, a national publication which featured the lives of university students in pictures, wearing a tiered, ruffled dress claimed to be an original costume from Gone with the Wind worn by Vivien Leigh during production. Although records have proved difficult to find, the dress was apparently part of an exhibition of items from the film that was held in Chicago that same year and shipped to Bloomington for the occasion. A brief article in the Chicago Tribune entitled “Gone With the Wind Elegance” written in January of 1940 does feature sketches of dresses described as “copies of ‘Gone With the Wind’ gowns now in Chicago,” but no details on the exhibition are given. The dress which most closely resembles the one which Barbara VanFleit would wear to her prom in March of that year is identified as a dress worn by Suellen O’Hara, played by Evelyn Keyes, as opposed to an outfit worn by Vivien Leigh in her role as Scarlett O’Hara. The topic of Gone With the Wind fashion was indeed popular in the spring of 1940, with advertisements for “Gone With the Wind Dresses” selling for between $1.98 and $3.98 appearing in the Chicago papers.

Later that March, Barbara’s name would again appear in the Garret Clipper, however this time next to that of Elmer Louis Houston, a convict at Indiana State Prison. Born the son of a laborer in Wisconsin, Houston is described on his World War I Draft registration card as having dark hair and dark eyes.  This card from 1918 lists Houston as being 18 years of age, although information found in the Federal Census suggests that Houston may have actually been as young as 16 at the time of his enlistment. Later census information suggests that Houston only received at most an 8th Grade education. Throughout what can be found of his life, his occupations were listed as farm laborer, roofer, and “motorman”.

By March of 1940, Houston was serving his second sentence at the prison, the state’s Northern facility located in Michigan City. His first crime was one of desperation, carried out in December of 1934. According to an article in the Jeffersonville Evening News, records show that on that cold day in December, Houston’s wife, Velma had given birth to one of their five children. On that day, Houston had tried to sell a gun to buy coal to provide for his family in Indianapolis where they were living. Finding no buyer, Houston attempted to use the gun to hold up a local bus driver in a store. Unsuccessful with the unloaded gun, Houston was apprehended by onlookers until the police arrived. He was paroled in August of the following year by the State Clemency Commission, serving less than a year. Following his parole, however, Houston was again sentenced – this time for between 5 and 21 years in February of 1938, for an undetermined crime.

It was this second sentence that Elmer Houston was serving when he encountered IU Professor of Fine Arts, Harry Engel, who taught fine art to the inmates at Indiana State Prison in the late summer of 1939. Engel had initially been invited by Hans Riemer, the educational supervisor of the prison, to meet artistically inclined inmates, and, excited by the talent he saw, began conducting in person classes in the infirmary of the prison for two weeks. After he had returned to Bloomington for the fall semester, Engel continued to provide feedback and instruction via correspondence. John Grogan, then deputy instructor of the arts program at Indiana State Prison, enthusiastically hoped that the class would serve as a model for arts programs at other prisons throughout the United States as it provided immense therapeutic and rehabilitative value to the inmates, as well as practical training in anticipation of release.

The works of art created by these prisoners would come to be shown at the Mezzanine Gallery (another of Engels efforts) of the Indiana University Bookstore. The show, “Prisoner Art,” featured the work of several inmates, many of whom were considered “lifers” or experiencing psychiatric issues. “Prisoner Art” was heralded as the first of its kind, and the sale of the inmate’s work – for prices ranging between $5 and $25 – went on to fund supplies for the continuation of the educational program. 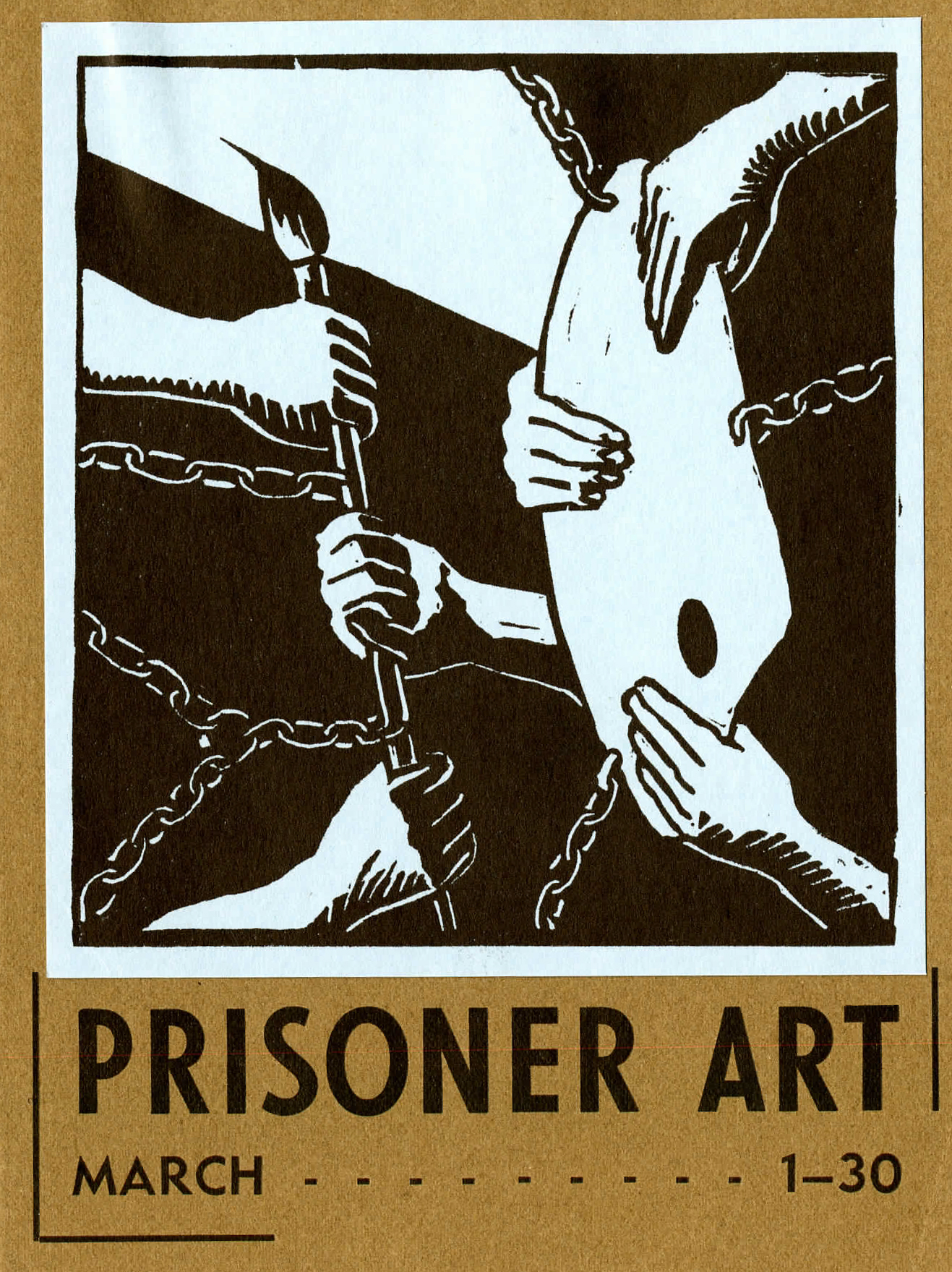 Cover of the 1940 exhibition pamphlet for “Prisoner Art”

Several of the pieces sold before the opening had even begun, but one piece, “Heart of a Rose,” was not for sale. Created by Elmer Houston, “Heart of a Rose” was instead to be given to its muse – the 1940 IU junior prom queen, Barbara VanFleit. While no record of the portrait exists, on March 25th of 1940, the Garret Clipper describes it as being made with “rug dyes and paints on a man’s handkerchief”. Houston had taken inspiration for the piece from an article he had seen describing VanFleit’s coronation. One wonders if “Heart of a Rose” featured its subject wearing the enigmatic “Gone With the Wind” dress we now associate that year’s prom.

Like any good tale, the story of Barbara VanFleit, Elmer Houston, and the prom that brought them together ends with a lot of questions.  What did “Heart of a Rose” look like?  While VanFleit was quoted saying she would take the piece after its exhibition, did she follow through on this? Was VanFleit’s prom dress actually worn by Vivian Leigh? Was it worn by her co-star Evelyn Keyes? Was it even an original movie prop or the subject of creative embellishment?

In the case of Houston, our story also ends with tragedy. Records indicate that Houston may have been drafted while still serving time in 1944, towards the end of World War II. His name would again appear in the paper in 1957, following his death. Several newspapers reported that Houston and his wife Velma had been found by police in their bed with a gallon jug labeled “cider” next to them. Inside the jug was a “green fluid.” This fluid was sent to the IU Medical School for analysis and was later determined to be antifreeze. Houston was dead on discovery, while Velma would later die at the General Hospital.

Barbara went on to marry Donald Scott Painter, her former prom king in 1942, and their son was born 6 years later. She passed away in 1968 in Fort Wayne, Indiana.