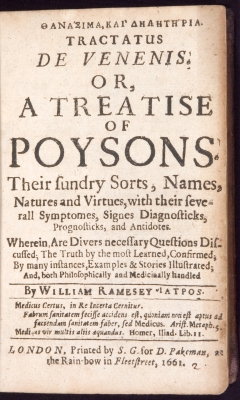 Thanasima, kai dēlētēria [in Greek]: Tractatus de venenis, or, a treatise of poysons: their sundry sorts, names, natures and virtues, with their severall symptomes, signes diagnosticks, prognosticks, and antidotes… / by William Ramesey (London: Printed by S.G. for D. Pakeman, at the Rain-bow in Fleet Street, 1661).

Written by the seventeenth-century British astrologer and physician, William Ramesey (1627–1676?), this book is likely the first English work on poisons. The text begins with a lengthy “Epistle Dedicatory” to Ramesey’s patron, Charles II, and is followed by two forewords, one aimed at a more learned audience, “To the Judicious and Ingenious Readers,” the other crafted for readers who might require a more “common” approach, “To the most Imprudent and Rurall Readers.” The author’s descriptions of the various types of poisons, include such things as “Mad-dogs bite,” “Garlick taken in excess,” the “Basilisk,” “Sea Dragons,” and insect venoms. He explains to his readers that there are no known poisons that can be programmed to kill at a specific time in the future, once administered. As the bookseller’s description accompanying this book explains, this directly refutes the then-common notion that a poison could be given which would both immediately perform the assassin’s work, but would allow ample time to establish an alibi. In 1668 Ramesey, having been admitted as an MD at Cambridge by royal mandate, became the physician-in-ordinary to Charles II. It is believed that he died in 1676 while in prison—not for poisoning, but for debt.