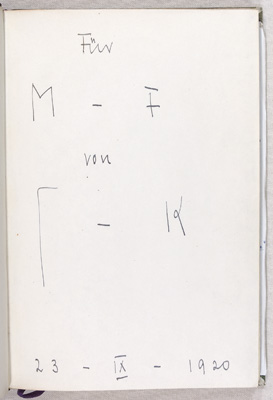 Georg Kaiser (1878-1945), a major figure in German literary Expressionism (1910-1925), even signed his books in typical Expressionist “Telegrammstil” (telegram style). The copy of Der gerettete Alkibiades (1920) shown here, recently added to the Lilly’s growing collection of modern German literature, was inscribed for his friend Marthe Fröhlich only five days after he’d sent the following barely-veiled threat of suicide to his wife: “No one is even close to being my equal: I know that I’m the brother of Kleist, Büchner, and Goethe. I am one of the great wonders of the world. I’m the most extreme exponent of human kind… And if—growing weak—I make Kleist’s fate my own, you must carry on in my memory…”

Suicide was surely on his mind—the play ends with the death of Socrates. Ironically, the limited edition (one of 50 signed copies) is a touch of luxury totally at odds with Kaiser’s own desperate financial situation at the time. In October of that year, calling to mind the protagonist of his most famous play, From Morn to Midnight, he was arrested for embezzlement, and eventually put in prison. He died in Switzerland in 1945– of natural causes.