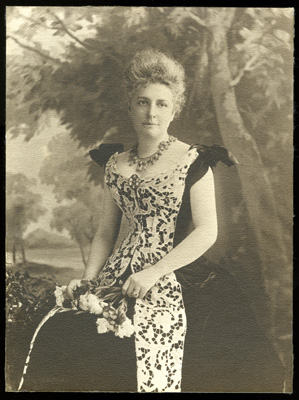 The Lilly Library is pleased to announce the recent acquisition of the Dvořàk/Thurber mss., ca. 1885-1937, which consists of documents, correspondence and ephemera relating to Antonìn Dvořàk, Jeanette M. Thurber, and the history of the National Conservatory of Music in America (NCMA). These materials were a gift from Prof. Robert Aborn, whose dissertation “The Influence on American Musical Culture of Dvořàk’s Sojourn in America,” may be read in its entirety at: https://scholarworks.iu.edu/dspace/handle/2022/3462.

Jeanette M. Thurber founded the National Conservatory of Music in 1885, which was based on the Paris Conservatoire model. In addition to replicating the European Conservatories to which American students had been turning in order to obtain a first class musical education, she also hoped to train as yet untrained students, the handicapped, and blacks as well as to encourage an indigenous music culture in the United States. Initially tuition free, the Conservatory was originally located at 126-128 East 17th Street; however that building was demolished in 1911. Unsuccessful attempts to revive the school and relocate it in Washington DC persisted through the 1920’s. The staff included Victor Herbert, Rafael Joseffy and Henry Finch as well as the noted composer, Antonìn Dvořàk, who was the director from 1892-1895. It was at the Conservatory that Dvořàk met his pupil, Harry Burleigh, one of the earliest African-American composers. Burleigh introduced traditional American Spirituals to Dvořàk at the latter’s request.

Antonìn Leopold Dvořàk (September 8, 1841 – May 1, 1904) was a Czech composer of Romantic music. During his time in America, among other compositions, Dvořàk wrote Symphony No.9 “From the New World,” String Quartet in F (the “American”), and the String Quintet in E flat, as well as a Sonatina for violin and piano.

View a copy of letter (copy made by Mrs. Thurber) from Dvořàk to Littleton discussing his initial contract with the NCMA.