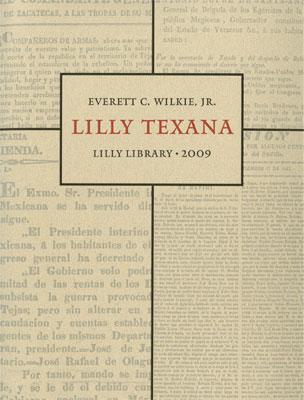 Based entirely upon the Lilly Library’s collections, a new work joins the ranks of bibliographical and historical publications that document the long, complicated history of Mexico–Texas relations before 1849. Lilly Texana: One Hundred Eighty Broadsides and Other Ephemera Relating to Texas, Printed and Published in Mexico before 1849 in the Lilly Library of Indiana University, by Everett C. Wilkie, Jr., describes a significant body of materials in the Lilly Library’s collections pertaining to Texas history that until now has been generally unrecognized or not reported to exist in the copy described. Most of the included items are not found in Thomas Streeter’s seminal Bibliography of Texas, the primary work in this area, or in other sources. Several entries represent the discovery of another copy of an item that Streeter believed to exist in only a single example.

The works described in Lilly Texana are part of the Bernardo Mendel broadside collection, which contains approximately 15,000 single–sheet items, pamphlets and ephemera, many of which are laws, other official pronouncements, or proclamations. Lilly Texana provides full bibliographic descriptions and historical context for each of the 180 works included and five indexes covering names, subjects, titles, publication, and bibliographic cross–references. The book will be of interest to anyone concerned with the history of Mexico–Texas relations, descriptive bibliography, the American Southwest, or the history of printing. Many of the items described are believed to be unique and demonstrate the often incredible depth of the Lilly’s unexplored collections.

More information about the publication and its author, as well as how to order Lilly Texana is available at https://blogs.libraries.indiana.edu/lilly//texana.shtml.