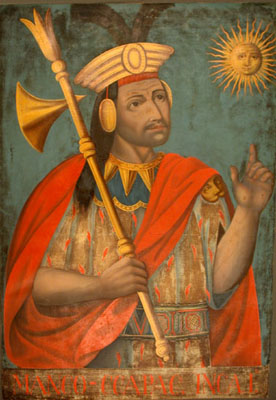 On Monday, April 5, 2010, Rebecca Cape, Head of Reference and Public Services at the Lilly Library, will highlight some Latin Americana, including items from the Bernardo Mendel Collection, such as the circa 1760 portrait of Manco Ccapac, first Inca ruler seen here on the left.

On May 3, 2010, James Canary, Head of Conservation at the Lilly Library, will host a talk entitled “The Book in the Himalayas.”

Associate Director and Curator of Books at the Lilly Library, Joel Silver, has already given two talks in this series. In February, he presented J.K. Lilly, Jr. (1893–1966), whose collection allowed for the founding of the Lilly Library in 1960. For most of his life, J. K. Lilly, Jr., of Indianapolis, was a devoted collector in many different fields. For some three decades, beginning in the mid–1920s, Mr. Lilly’s collecting attention was focused on assembling one of the finest private libraries of rare books and manuscripts in the world. Mr. Lilly’s collection, which was quite wide–ranging in scope, was particularly strong in American and British literature, American history, voyages and travels, and the history of science and medicine. In the mid–1950s, Mr. Lilly donated his collection of 20,000 books and 17,000 manuscripts to Indiana University, where it became the founding collection of the Lilly Library. Earlier this month, Joel Silver gave a talk which focused on the examples of early printed materials here at the Lilly Library.

All of the events in this series take place on Mondays at 4:00 p.m. in the Slocum Room of the Lilly Library. Please check our calendar or the 50th Anniversary Calendar of Events for more information.

View more images relating to the Lilly Library materials discussed in these talks.