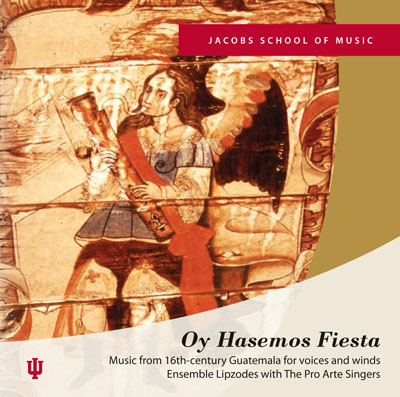 This coming Tuesday, April 6, 2010 at 7:00 p.m. in the Slocum Room at the Lilly Library, Ensemble Lipzodes, currently in Quito, Ecuador to perform at the Festival de Música Sacra, will give a concert and lecture celebrating the release of the group’s most recent CD, Oy Hasemos Fiesta.

“The ensemble’s unique name comes from a creative misinterpretation of the writing on the flyleaf of MS 1, Santa Eulalia, from the Guatemalan Music Manuscripts. What at first glance seems to say ‘Lipzodes,’ actually is the first part of a passage which continues further: ‘LibRodeSancta olaya Puyumatlan. Este libro de canto hize yo franc de Leon maestro deste pueblo de sancta olaya. hizelo En el año De mill y quinientos y ochenta y dos annos. Franc De Leon.’ In an orthographic transformation typical of the region, the letters ‘b’ and ‘p’ became exchanged, and the ‘R’ lost its vertical bar, to become what appeared to be a ‘Z.'” (From press release)

This flyleaf will be on display the evening of this concert; other items from the late 16th–early 17th century Guatemalan Music Manuscripts collection will be on display in this summer’s Main Gallery exhibition: Of Cabbages and Kings: Unexpected Treasures of the Lilly Library.