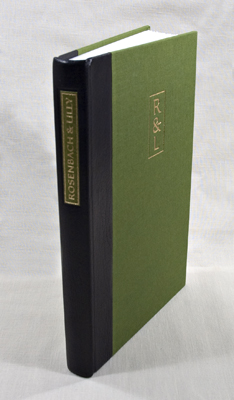 Joel Silver, Associate Director and Curator of Books for the Lilly Library, has written a book about the collector for whose family the Lilly Library was named, Josiah Kirby Lilly, Jr., and Dr. A.S.W. Rosenbach, from whom Mr. Lilly bought many books and manuscripts. Published in limited first edition by Bird & Bull Press, Dr. Rosenbach and Mr. Lilly: Book Collecting in a Golden Age not only tells the story of these two particular men but also brings to light the golden age of book collecting in the earlier decades of the twentieth century.

For most of his life, J. K. Lilly, Jr. (1893–1966), of Indianapolis, was a devoted collector in many different fields. For some three decades, beginning in the mid–1920s, Mr. Lilly’s collecting attention was focused on assembling one of the finest private libraries of rare books and manuscripts in the world. Mr. Lilly’s collection, which was quite wide–ranging in scope, was particularly strong in American and British literature, American history, voyages and travels, and the history of science and medicine. In the mid–1950s, Mr. Lilly donated his collection of 20,000 books and 17,000 manuscripts to Indiana University, where it became the founding collection of the Lilly Library.