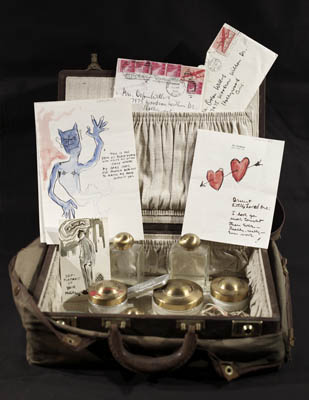 After sharing some of its treasures this spring, the Lilly Library is presenting some of its more surprising treasures during the summer of its 50th Anniversary year: Of Cabbages and Kings: Unexpected Treasures of the Lilly Library. This exhibition, which runs through September 4, 2010, offers a look at unusual books, manuscripts and other physical objects from the Lilly Library’s collections, including: A Catalogue of the Different Specimens of Cloth Collected in the Three Voyages of Captain Cook; Rita Hayworth’s makeup case; George Washington’s Proclamation…To Recommend…a Day of Public Thanksgiving and Prayer; Guatemalan music manuscripts from the late 16th and early 17th centuries; the earliest known manuscript of Auld Lang Syne autographed by Robert Burns; and the first printing with music of The Star Spangled Banner. The exhibition also includes some royal materials, such as Queen Elizabeth I’s Great Seal, and the memoirs of King James II.

Objects from great artists’, poets’, and historical figures’ childhoods and everyday lives are on display, as well as love letters and locks of hair. Rare first editions, such as Webster’s American Dictionary (1828) and Chairman Mao’s “Little Red Book” (1964), are also included in the exhibition.

The title of this exhibition, Of Cabbages and Kings: Unexpected Treasures of the Lilly Library, is borrowed from Lewis Carroll’s poem, “The Walrus and the Carpenter,” found in his book entitled, Through the Looking Glass: “‘The time has come,’ the Walrus said, ‘To talk of many things; Of shoes—and ships—and sealing wax— Of cabbages—and kings— And why the sea is boiling hot— And whether pigs have wings.'”

And so, from May 24 to September 4, 2010, the time has come —here at the Lilly Library— to look at many things. We hope that you will experience the joy of unexpected discoveries that this exhibition offers. Of Cabbages and Kings: Unexpected Treasures of the Lilly Library is curated by Rebecca Cape, Erika Dowell, and Gabriel Swift.