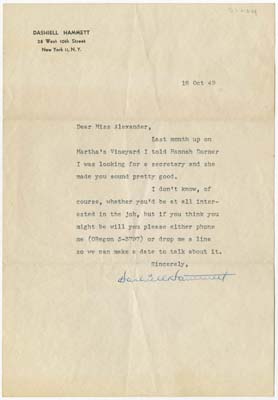 He: “I’m glad you finally got around to facing the problem of what you’re going to call me. Dash is all right with me, though things like darling and sweetheart have their good points too.”

She: “I feel mighty familiar using that salutation. ‘Hey, you!’ is usually my speed.”

If this sounds like snappy banter out of a hard-boiled detective novel, perhaps it should. These excerpts of correspondence, between Maltese Falcon author Dashiell Hammett and his secretary Muriel Alexander, come from the Hammett, Dashiell mss., now available to researchers.

The Hammett–Alexander correspondence consists of sixty letters exchanged over a three-year period, 1949–1952. Most were written while Hammett was in Hollywood writing a screenplay (called, appropriately, Detective Story) and Alexander remained on the East Coast tending to his finances and other affairs. Monetary and political issues are alluded to frequently in the communiqués: During this time, Hammett was accused of both tax evasion and communist proclivities; eventually, he was imprisoned (1951) and blacklisted (1953). Yet their bicoastal exchanges—he complains about the script, the rain and bad luck at the racetrack, she heralds airmail deliveries of books, clothes and cigarettes—suggest a platonic, affectionate relationship built around shared interests and mutual wit. In one letter, Alexander announces that a “very snooty voiced dame called and asked for you. I gave her the so-sorry-but-you-were-away routine. Could I help?” In another, Hammett writes, “(L)ast night I went to the studio to see a showing of SUNSET BOULEVARD…It was a stinkeroo, I thought,” adding that he overheard John Huston rave about the movie. “It’s easier for me to think John is crazy than to think I am.”