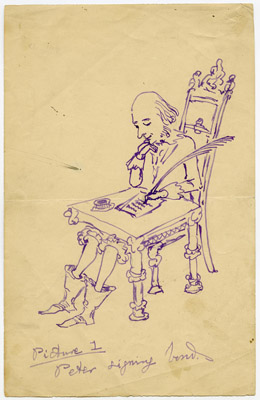 Donald Friedman, author of The Writer’s Brush: Paintings, Drawings and Sculpture by Writers, called “one of the most fascinating books of the year” by The London Times, will speak informally on authors and their art at 5:00 p.m. on Monday, May 23, 2011. Friedman’s talk celebrates the opening of the Lilly Library’s exhibition entitled “Literary Sketches: Authors as Artists,” which will include works of art by Kurt Vonnegut, Sylvia Plath, Lewis Carroll, G.K. Chesterton, Amiri Baraka, James Whitcomb Riley, Gunter Grass, Orson Welles, Henry Miller, Jean Cocteau, Federico Fellini and others.

Donald Friedman received his J.D. from Rutgers University and an L.L.M. from New York University Law School, started practicing law, married and raised two children. He also began to study fiction writing. In 2000, his novel The Hand Before the Eye won the Mid-List Press First Series Award and he was launched into a new career as a novelist.

Mr. Friedman’s book will be available for purchase at the event and is now in stock at the Friends of Art Bookshop (foabooks@indiana.edu, 812-855-1333).