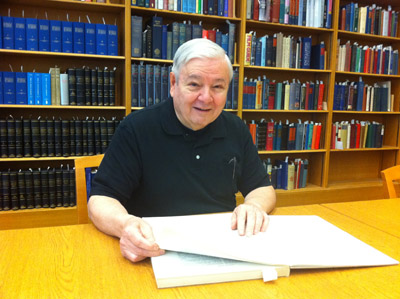 Seen here in a photo taken in the Lilly Library Reading Room using one of his favorite reference sources is Indiana University Librarian Emeritus Marty Joachim. Since his retirement from the IU libraries at the end of 2002, Marty has given valuable service to the Lilly Library, devoting thousands of hours adding records to IUCAT (IU’s online library catalog) for the Lilly Library’s early printed books. Marty’s own academic background in Classical Studies and his knowledge of Latin and Greek made him the perfect cataloger to do this work. He estimates that at least 75% of the incunabula are in Latin. The remainder are mostly in Italian, French, German, Greek, and Spanish with an occasional work in English. Marty notes that working with the Lilly’s incunabula was endlessly fascinating. He often marveled at working with items that were unique to the Lilly Library or existed in only a few known copies. He completed the project in early June 2011. During his second retirement, Marty plans to do a lot of traveling; so far this year he has already been to Israel and Austria and will be going to China in August.

Before Marty’s stellar accomplishment, most of the Lilly Library’s holdings in books printed before 1501 were found only in the manual card catalog in the Lilly Library Reading Room, and most of these records were brief with a minimum of description and entries. Now fully cataloged records with multiple access points for all titles are available in the online catalog. Since the time these materials were originally cataloged, scholarship has added greatly to what is known about the early years of printing in Europe. Major bibliographical tools such as the Incunabula Short Title Catalogue and the Bodleian Library incunabula catalogue have been developed or published. Marty was able to benefit from the work of other scholars and incorporate new information into the bibliographic records he created. Genre headings on each record provide access by the term Incunabula, further subdivided by place and date. Try searching IUCAT for the keyword phrase Incunabula Italy Venice.

A big thank you to Marty Joachim for bringing our 15th century books out into the 21st century.