Rebecca Stanwick is an MLS Candidate in the Department of Information and Library Science in the IU School of Informatics and Computing. Her major focus is on Children and Youth Librarianship, but she also works part-time at the Lilly Library. She recently organized an exhibition about the R. E. Norman papers for the Lilly Library’s foyer. Here she talks about the experience: 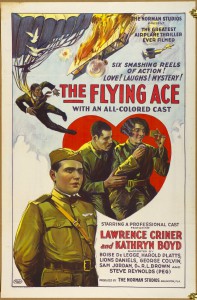 Before beginning work on this exhibition, I had never heard of R. E. Norman or his project. Coming from a background in literature and working with my love of narrative, I was looking for a good story I could tell. I was also unaware of the scholarly recovery of Norman that is currently taking place and of newfound recognition that Norman’s movies are receiving. In November, Barbara Tepa Lupack will be publishing Richard E. Norman and Race Filmmaking, the first full-length critical study of Norman and his film company’s place in cinematic history. Here at Indiana University, the Norman revival is in full swing. In November, Norman’s project will play a part in a conference taking place at the Black Film Center/Archive where Norman’s only surviving full-length film, The Flying Ace, which was preserved by the Library of Congress in 2010, will be screened with live accompaniment at IU Cinema. The newfound critical attention is deserved, and it is exciting to see what scholars have to say about this long dormant, yet exceedingly interesting, character of black film history.

As I said, however, I knew none of this. I ultimately came to choose the R. E. Norman collection because I was intrigued by how the Norman Studios Silent Film Museum/Norman Studios website characterized Norman. It describes him as “disheartened about the state of race relations at the time, both in real life and in the movies…” This characterization of a progressive man in a time when African Americans were still firmly seen as second class citizens made me want to learn more about Norman’s motives for creating all-black films. Was Norman as racially progressive as the statement suggests? 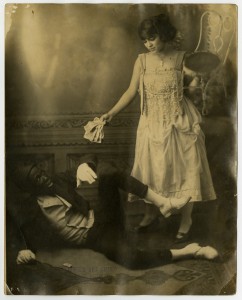 What I discovered in Norman’s papers, especially letters to his brother Bruce, is that he was first and foremost a businessman. It is well documented that Norman and other race filmmakers saw an untapped market in all-black films. Often excluded from white films and cinemas and dismayed by the stereotypically racist portrayal of blacks by white filmmakers, black audiences were excluded from cinematic entertainment. Black audiences were hungry for stories and cinematic portrayals that spoke to them and reflected their experiences. These are the films that Norman offered.

As progressive as the films seem now, to characterize Norman as a proponent of better race relations is problematic. In his correspondence with his black talent, Norman was often dismissive and harsh. In his letters to his brother Bruce, he often uses racist language in reference to different actors and talent as well as to theater owners with whom Norman was conducting business. The letters suggest that his project was more about good business and making money than it was the betterment of the black community.

In addition to Norman’s letters, the exhibition features other items that document the actors and actresses with whom Norman came into contact. The actors include Anita Bush and Bill Pickett as well as vaudeville performers like Mazelle M. Perry. I have also included letters and pictures of lesser known African American talent who, vying for a chance to be in a Norman production, sent inquiries to Norman about parts great and small. This small exhibition only scratches the surface of the richness of the R. E. Norman collection. I hope many more scholars will come to investigate the R. E. Norman papers at the Lilly Library and at the Black Film Center/Archive where a large portion of the collection is also housed.