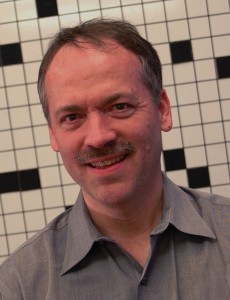 Will Shortz IU’74, NPR’s puzzlemaster and the crossword puzzle editor of the New York Times.

On December 13, 2013, the crossword puzzle celebrated its 100th birthday, and eyes around the world turned towards IU alumnus Will Shortz for his wisdom on the subject. Will has been immersed in the world of puzzles since he created his first around age eight or nine. Since then, he has honed his knowledge through his individualized major in enigmatology at IU, the only such degree granted in the world; through years of puzzle collecting; and through his work as a professional puzzler: the editor of Games Magazine, NPR’s puzzlemaster, and the crossword puzzle editor of the New York Times.

Will took time out of his busy schedule to sit down with Becky Wood, Director of Communications at the IU Libraries, to talk about his puzzle collection, his passion for table tennis, and what continues to puzzle him.

Will Shortz bought his first antique puzzle book at a hospital sale in Crawfordsville, Indiana, where he grew up. Although he devoured the copy of Hirschberg’s Can You Solve It, Will didn’t think of himself as a book collector until his third year of law school at the University of Virginia. The school sponsors an annual essay competition about collecting rare books with prizes in a number of categories, including most interesting collection. Convinced that his puzzle book collection was a certain winner, Will wrote his essay, created a bibliography of his puzzle library, and though he did’t win that competition, ever since then he has considered himself a rare book collector.

Will describes his collection as huge—he has over 25,000 puzzle books and magazines dating back to 1533; eclectic—he collects anything related to puzzles that is in print including books, magazines, newspaper articles; and ephemeral—advertising trade cards, postcards, tickets, newspaper articles, things that are one-of-a kind and normally thrown away.

One of the many gems of his collection is the only existing copy of the first crossword puzzle ever published. It was the Sunday before Christmas, December 13, 1913, and the New York World “Fun” Sunday supplement editor Arthur Wynne wanted something to liven up his newspaper’s games section. The grid Wynne created was diamond-shaped and appears simple compared to many of today’s crosswords. After one hundred years, Will’s copy of that puzzle, carefully stored in an archival sleeve, still retains its original colors and conveys the rich and interesting history of the genre whose genesis it marks.

Immersed in the History of Puzzles

Will’s interest in the history of puzzles has deep roots. Between his junior and senior years at IU, he received a research grant to study the history of puzzles at the Library of Congress where he spent most of his time in the Rare Book and Special Collections Reading Room. On that visit, Will discovered the National Puzzlers’ League (NPL) and its magazines, The Enigma and before that The Eastern Enigma, the discovery of which marked an important moment in his life. Whereas puzzles are usually a solitary activity, the League connected puzzlers with one another, and for Will, bringing people together has always been a primary goal. He has belonged to the NPL since 1972, has served as program director of the NPL’s national convention since 1976, and remains deeply involved in national and international tournaments and activities that transform puzzling into a competitive social occasion.

Will wrote his thesis on the history of American word puzzles before 1860. He combed through material at the Wells Library as he conducted research, uncovering a microfilm copy of Puritan minister Samuel Danforth’s 1647 almanac, among the earliest surviving examples of the American almanac form. Along with Reverend Danforth’s musings on astronomy and religion, every month of the year he included a puzzle, specifically, a versified riddle. Puzzles held such a grip on people that even in a religious colony in the 17th century, people were creating and solving them.

Will spent weeks in the newspaper room in the basement of the Wells Library looking for puzzle columns in the bound volumes. As he puts it, “IU has a great collection of microfilm and microfiche of all the early publications, so when I was studying the history of puzzles, I literally looked through every newspaper and magazine I thought might contain puzzles. I found a lot of great information on the history of puzzles through months of work at the IU Libraries.”

Shortz at the Table

For many people, solving puzzles—and crosswords in particular—is a relaxing, refreshing activity. Because puzzles are a job for Will, he turns to another activity to recharge: table tennis. Although he was a tennis champion in college, Will says that the two sports are quite different in terms of their physicality as well as the game behind the game. In both you need to figure out your opponent, playing on your strengths and their weaknesses, but Will compares table tennis to puzzles since both are what he terms “brain games.”

What Puzzles Will Shortz?

In addition to serving as program director of the NPL’s convention, Will is also the organization’s historian. Founded in 1883, the NPL is the oldest puzzlers’ organization in the world, and it has weathered highs and lows, including almost dying out in the late 1960s for lack of interest. Around that time, an old puzzler offered for sale a complete set of The Enigma, the magazine of the NPL, to anyone who was interested, agreeing to donate a certain portion of the price to support the NPL. Soon thereafter evidence of the sale appeared in The Enigma, but the buyer was not named and remains unknown. Who bought that complete set, and where have the seventeen earliest issues of The Enigma gone? That is what puzzles Will Shortz.

Do you know where those seventeen issues are?

Shortz in the News

Interview with Mo Rocca on CBS This Morning