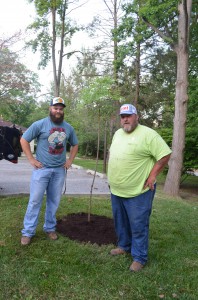 Bloomington author Ross Lockridge Jr.’s 1948 book Raintree County has been touted by some contemporary critics as a candidate for that elusive goal, the Great American Novel. To honor Lockridge’s legacy, the Lilly Library has partnered with the IU Office of Landscape Architecture to plant a golden raintree at the historic Raintree House in Bloomington. The raintree was featured as part of the Lilly exhibition “Raintree County: A Celebration of the Life and Work of Ross Lockridge Jr.,” which went on display this spring in tribute to the author’s centennial.

Special thanks go to the Lockridge family for making the exhibition possible through their gift to the Lilly Library of thousands of the author’s personal belongings, including letters, mementos, unpublished writings, and a portion of the original manuscript for the famed novel. The Lockridge family has also been very generous in sharing their family story, which includes their father’s success, his suicide, and other details of his life and work.

Lockridge was familiar with raintrees through their prominent population in New Harmony, Indiana. In 1937 he wrote A Pageant of New Harmony, which was performed in the town as part of the second annual Golden Rain Tree Festival. Years later he employed the raintree as a symbol of knowledge, fertility, and life in his epic novel and appropriated its name for his title.

Native to eastern Asia, the raintree was introduced to the West in the 1700s and blooms in early summer with clusters of mildly-fragrant yellow flowers. In the fall, the leaves turn buttery yellow and the tree produces brown, papery seed capsules which somewhat resemble Chinese lanterns. The tree will be located on the west side of Raintree House, visible to visitors and passers-by.

Built in 1845, Raintree House is currently home to three young golden raintrees but was once home to one of the largest such trees in southern Indiana. In 1969 the IU Foundation purchased the property, and the Organization of American Historians moved into it the following year, occupying it ever since. Constructed from locally produced brick and virgin walnut timber, the house is designated an Indiana historic site and is on the National Register of Historic Places.

Given the role and sense of history in Raintree County, the ceremonial planting at Raintree House is a fitting coda to the Lilly’s recently-concluded Ross Lockridge Jr. centennial exhibition. “For Raintree County is not the country of the perishable fact,” the author stated in the novel’s epigraph. “It is the country of the enduring fiction. The clock in the Court House Tower on page five of the Raintree County Atlas is always fixed at nine o’clock, and it is summer and the days are long.” This tree serves as a reminder of the sturdy and renewable power and beauty of literary art that emerged from the rich imagination of one Indiana writer in the middle years of the 20th century. 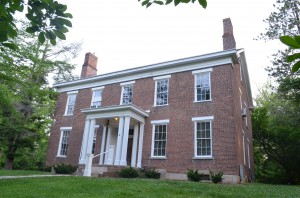 Built in 1845, Raintree House is part of Indiana University and is currently home to the Organization of American Historians.  It is also now home to three golden raintrees.