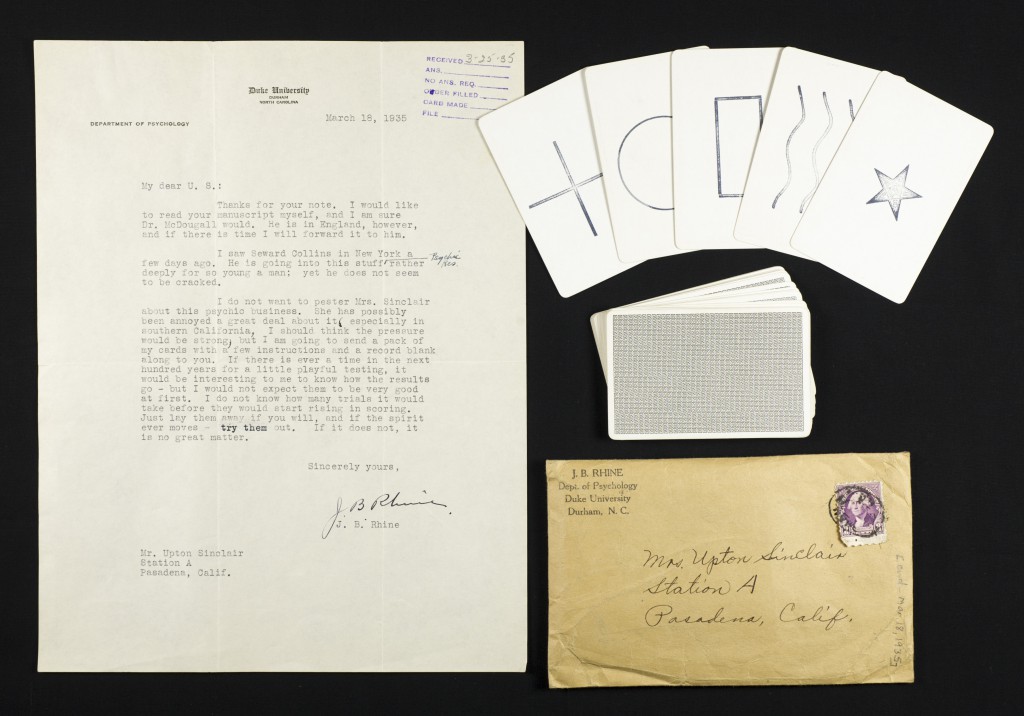 Upton Sinclair, a Pulitzer Prize-winning writer perhaps better known for his novel The Jungle, a scathing critique of the meat-packing industry, was a sometime investigator of occult and mystical phenomena. In 1930, Sinclair published Mental Radio, a book that purported to demonstrate evidence of his wife Mary Craig Sinclair’s telepathic powers. The respected, and often skeptical, psychical researcher William McDougall wrote the introduction for the book’s English edition and Albert Einstein introduced the German edition.

Mary claimed to have developed telepathic abilities after the deaths of several close friends. Initially, her husband was irritated by his wife’s gifts which would manifest, inopportunely, in the middle of the night and Mary would wake him in order to recount her visions which often featured her husband doing everyday activities. Eventually, however, Sinclair decided to test his wife’s claims in a methodical manner and this investigation formed the basis of his book. Sinclair would draw whatever came to mind on a piece of scrap paper and would put each scribble on his wife’s belly. His wife, who could not see these drawings, would then reproduce or describe her impression of them.

Concerning these phenomena, Sinclair concluded: “Either there is some super-human mind or else there is something that comes from the drawings, some way of ‘seeing’ other than the way we know and use all the time.”

The Lilly Library’s archive of Upton Sinclair’s papers is comprised of over 150,000 items, including the original research notes and drawings for Mental Radio.

Several items of correspondence in the Lilly’s collection add further insight into the story of Mrs. Sinclair’s alleged telepathy.  On March 18, 1935, Upton Sinclair received a letter from J.B. Rhine, founder of the parapsychology lab at Duke University.  Rhine was a psychologist who helped found the (now largely discredited) branch of science known as parapsychology, a discipline concerned with investigating paranormal and psychic phenomenon.  He was one of the scientists who published articles against the famous Boston medium Mina Crandon, known a “Margery.”  These skeptical revelations led Arthur Conan Doyle, a fervent believer in spiritualist phenomenon, to publish an article in a Boston newspaper titled “J.B. Rhine is an Ass.”  But despite his early attempts to debunk paranormal phenomenon, Rhine himself became quite caught up in his own beliefs in psychic phenomenon, particularly Extrasensory Perception (ESP).  In 1934 he published a book on the subject based on research using Duke students.  The book made him something of a celebrity, and he received letters from all over the world asking him to investigate their paranormal experiences.  The research was supported by institutions such as the Rockefeller Foundation and individuals such as Alfred P. Sloan, the CEO of General Motors.  During the mid-20th century, it genuinely appeared as though parapsychology was on its way to becoming a recognized scientific discipline.

One of Rhine’s tools in his ESP experiments was a set of cards designed by his colleague Karl Zener.  These cards had five different symbols on them: a circle, a plus sign, three wavy lines, a square, and a star.  Most people today recognize these cards from a scene in the 1984 film Ghostbusters in which the parapsychologist Dr. Peter Venkman (Bill Murray) conducts an experiment with the cards, shocking his male subject even when he guesses correctly and letting his pretty female subject pass with flying colors.  The cards were used by Rhine to test subjects for ESP.  The experimenter would look at the symbol on the card, and the test subject would then try to guess what symbol was on the card.  Any percentage higher than that of pure chance (20%) was considered significant.  Unlike the character in Ghostbusters, Rhine did not use electric shocks in any way, and his research turned up a number of test subjects with high hit rates.  Even the CIA was interested and purchased some of these cards to conduct their own tests.

Many factors can lead to high hit rates, including poor shuffling of the deck, sensory leakage (in which the subject can see the card in a reflection, see through the card, or pick up on cues from the experimenter), or outright cheating.  In short, these experiments have now been shown to have dubious scientific validity.

J.B. Rhine’s letter to Upton Sinclair asked him if he would mind testing his wife with the Zener cards.  That letter and the deck of cards is now held in the Lilly’s archive.  Sinclair responded promptly and enthused that his wife had “had one of those experiences when she was absolutely sure that he had got the correct answers.”  Without even looking at the cards, he alleged, she had been able to correctly guess the symbols.