Starting in August, cats of many stripes will make an appearance at the Lilly Library, contained within the pages of children’s books. The foyer exhibition cases will feature feline characters in books spanning from the 18th through 21st centuries.

With few exceptions, until the seventeenth century the relationship between cats and humans was a purely practical one. In exchange for shelter, cats kept the mouse population at bay. However, by the eighteenth century, cats had charmed their way into humans’ hearts and became household companions. Likewise, the roles played by cats in children’s literature have expanded over time. Cats began as characters in fables and moral tales and later moved on to portray everything from tricksters to mystical creatures to heroes. Visit the Lilly Library this summer to view every breed of literary cat from pop-up to miniature, comedic to poetic. 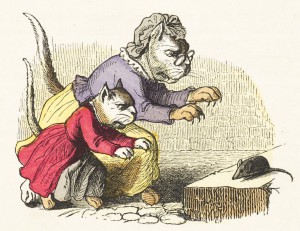 Dame Tabby teaches her kitten the art of mousing in Pussy’s Road to Ruin, or, Do as You Are Bid by Clara de Chatelain, ca. 1840.