Making connections with other libraries and their staff is an important and rewarding part of the work we do as librarians and teachers, especially in special collections. These relationships can lead to important discoveries that may bring more understanding to specific materials, which in turn can be shared with a larger audience through digital media.

For example, a series of emails with Heather Wolfe, Curator of Manuscripts at the Folger Shakespeare Library, about the transcription of a Latin abbreviation, led to the realization that both the Lilly Library and the Folger Shakespeare Library possess related Star Chamber dinner accounts. It all began when I attended the Mellon Summer Institute in English Paleography at the Folger, taught by Heather. After many fun and fruitful weeks spent in the Folger, I then ventured back to the Lilly as a newly trained paleographer of secretary hand. In order to keep up on my training, I researched secretary hand manuscripts at the Lilly that I could transcribe. One of my findings were the Star Chamber Dinner Accounts 1591-1594, a collection of two manuscripts that list the food provided for the dinners, the cost, along with the individuals who attended. These dinners took place in the Inner Star Chamber at the end of a day’s work. Wednesday and Friday were the customary Star Chamber days; Fridays were “fishdays.” These dinners occurred during Michaelmas, Hilary, Easter, and Trinity, the four legal terms, and were provided at the public expense. The growing costs of these lavish dinners apparently concerned William Cecil, Lord Burghley, who signed off on these dinners as Lord Treasurer.*

The manuscripts are fascinating, so I took them to my desk and got straight to work. When I came across a Latin abbreviation I did not recognize, I emailed Heather for help. Her response was both helpful and surprising, as she asked if the Lilly copies of the Hilary term dinners looked similar to their copy of the Hilary term dinners from their collection, Expenses of the diet provided for the council in the Star Chamber [manuscript], 1591-1605. After a series of emails and digital images, the shared provenance was confirmed. This discovery was a happy accident, which made me even more appreciative to have been a part of Heather’s paleography class at the Folger.

For more images of the Folger Library and Lilly Library’s copies of the Star Chamber dinner accounts for the Hilary terms and for more information concerning the manuscripts, please visit Heather Wolfe’s blog post on the Collation. I am currently transcribing the Lilly copies, while the Folger will be transcribing their copies as part of their EMMO project. Please contact Kristin Leaman at kbleaman@indiana.edu for digital images of the Lilly copies, or to schedule a time to come in and see the manuscripts. 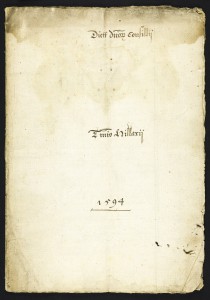 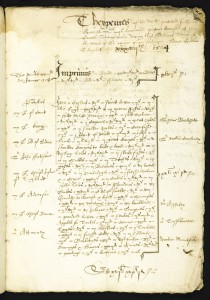 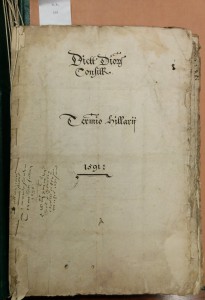 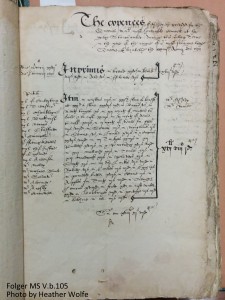