Cards from the Lilly Library’s collection of Victorian holiday cards will be exhibited in the Lilly’s Lincoln Room through December 23rd. 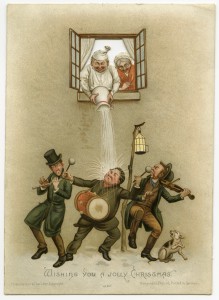 The tradition of the Christmas card dates to 1843, when Sir Henry Cole asked John Calcott Horsely, R.A., to design a card that he could send to friends at the holiday season. One thousand copies of the lithographed, hand-colored card were produced, priced at one shilling each. The card’s central frame depicts a family feast, flanked by two images of charity to the poor.

The influence of the Valentine card, which predated the Christmas card, is clearly visible in the earlier cards with either flowers and lace-paper.  As time went on, the cards became ever more elaborate and decorative and it became fashionable to collect as many cards as possible. Victorians filled their scrapbooks with pasted-down paper images bursting with sentiments of holiday merriment and cheer.  New printing techniques, such as chromolithography, helped to spread the practice of producing, sending, and collecting these colorful cards in both Britain and America.

The cards displayed here represent the wide—and sometimes bizarre to modern tastes—range of imagery available on Victorian holiday cards.  Some of the cards contain familiar figures such as Santa Claus, popularized by the 1823 poem “A Visit from St. Nicholas” (“‘Twas the Night Before Christmas”) by Clement Clarke Moore and illustrations by the American cartoonist Thomas Nast.

Other images, however, are more puzzling to the modern eye: colorful fruits and flowers, beach scenes, and summer days are featured as often as snow and cozy fires.  Popular humorous scenes often seem downright mean-spirited to modern sensibilities; on cards displayed here you’ll find brawling children, an elderly couple dumping a jug of water onto a group of jolly carolers, a bevy of smartly-dressed ladies pelting a hapless man with snowballs, and an old gentleman mired up to his waist in the snow.

Animals were always a favorite subject, as seen in the wide range of the Lilly Library’s eclectic collection: a caroling cat, robins marching with matchstick torches like an angry mob, and a frog waltzing with a beetle on the sandy beach are just a few of the whimsical, charming, and odd animal-themed cards on display.  Perhaps the most puzzling images are those of small dead birds, especially popular in Britain in the 1880s.  The symbolic meaning of these sad little lifeless feathered friends has been lost to history, but they are pasted in many Victorian scrapbooks alongside flowers, Santa, and sentimental greetings for happy holidays and a fruitful new year. 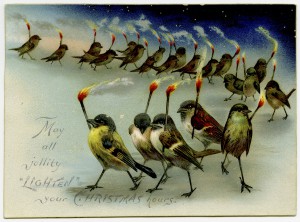 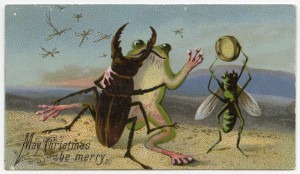 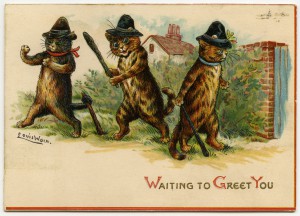