What would you say if you had the chance to write to Kurt Vonnegut? The Vonnegut Manuscript Collection at the Lilly Library includes many letters from fans who took the leap and reached out to Vonnegut during his lifetime. The collection contains four boxes of general correspondence (Boxes 1-3 and 26, described in the Finding Aid) with the bulk of the fan letters spanning from 1970s until the time of Kurt Vonnegut’s death in 2007. Interspersed among routine business and publication agreements are hundreds of fan letters. Many come from Vonnegut readers who surprised themselves with an almost overwhelming impulse to write to the author. Many of these fans admit that they never thought they would write a fan letter.

A fan from Virginia wrote on September 30, 1976, “In my copy of Wampeters, Foma & Granfalloons (Opinions) I found a letter from you. It looked very much like a personal letter, not because it was written to me alone; but because you shared personal facts and viewpoints with your readers. I usually like to answer my personal letters and so felt inclined to answer the one from you.”

On September 13, 1977, a fan in Ohio wrote, “I realize this is a very candid letter and from a total stranger, and such things can be embarrassing, but I wanted to write anyway.”

A reader from California wrote on March 28, 1981, “This is a fan letter. I am forty-six years old and this is the first fan letter I have ever written, so I might not be very good at it. Please bear with me.” 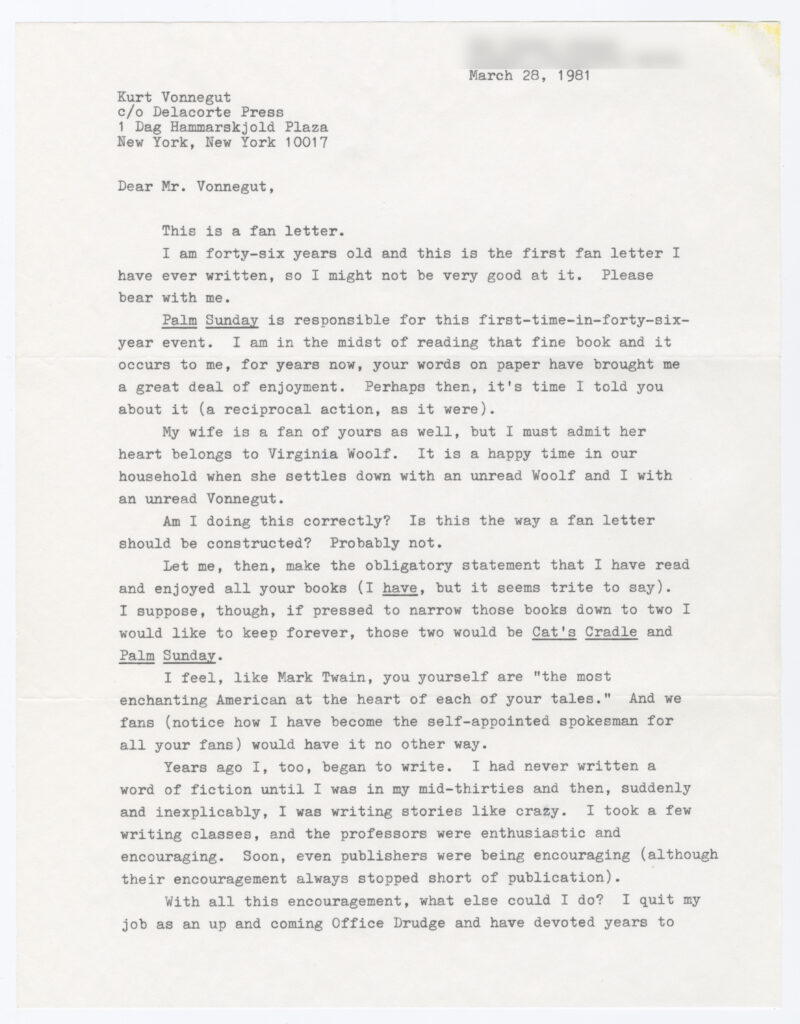 In the eyes of his fans, Kurt Vonnegut was a friend, a confidant, someone to ask for writing advice, someone to pitch ideas to, an insider in a club of like-minded individuals, a lifesaver, and a light in dark times. Fans often quoted Vonnegut’s own phrases back to him as though they were inside jokes between friends. They also opened up to him about personal matters such as near-death experiences, illness, loneliness, and writer’s block. It is clear that fans felt an intimate connection with Kurt Vonnegut through his novels and other writings.

On December 3, 1975, one fan wrote, “I find myself addicted to your writing; I find your stuff written just for me. How is it, then, that we could be on such intimate terms – you know the stuff I’ve hidden away between my ears and you write for that audience exclusively […]?” 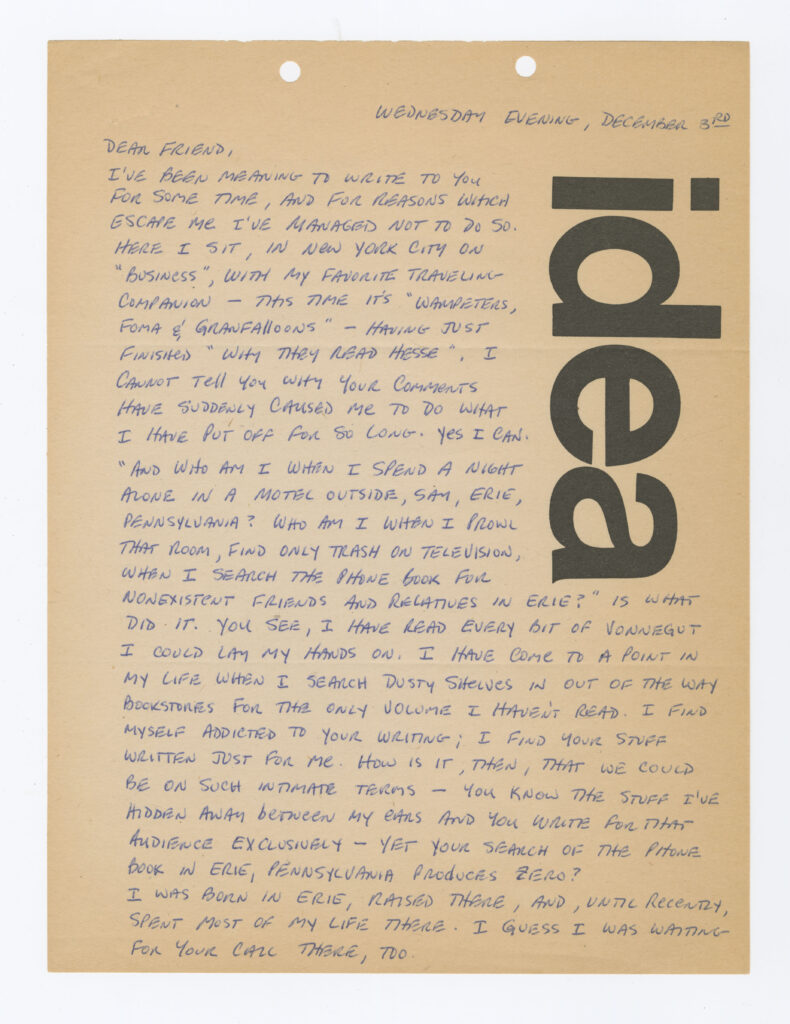 Some children and teenagers also wrote to Vonnegut in an attempt to solicit help with English class assignments. In one particularly amusing example, on September 22, 1975 an enterprising student wrote, “I respectfully request an utterly profound statement in any one of your many areas of erudition, which will be both personally enlightening and also satisfy a requirement for my English class.”

People from diverse backgrounds wrote to Kurt Vonnegut. Fans include atheists and believers, teachers, students, people in the military, aspiring novelists and playwrights, and avid readers from outside the United States. The largest proportion of fan letters come from the 1970s, when Vonnegut’s popularity seems to have peaked. While we do not get to see photographs of most of the fans, one undated letter (almost certainly from the late 1970s or early 1980s) came with a photo of a high school book group who called themselves “Vonnegut Freaks.” 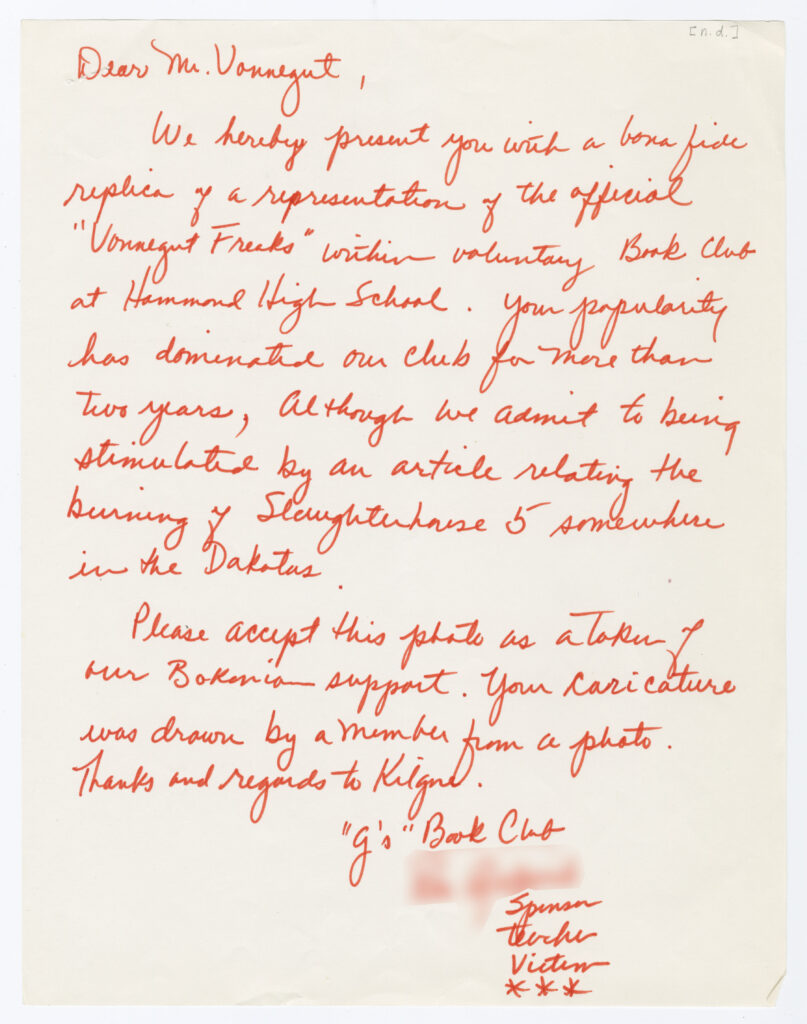 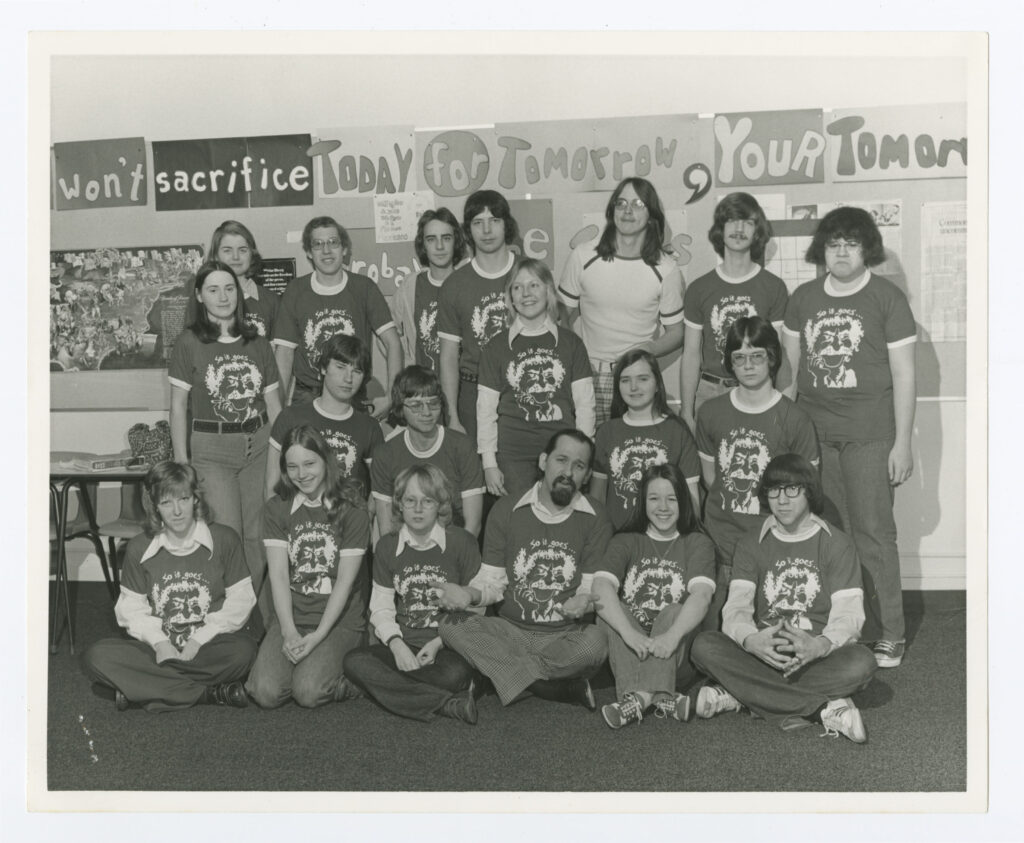 The collection does not include many examples of letters from Vonnegut back to his fans until the later years of his life, but some of these later letters demonstrate an engaging correspondence between Vonnegut and his fans. There are some touching moments. For example, Vonnegut’s own handwritten note in the upper margin of a letter dated June 10, 1997 indicates that he received this letter back from an ailing teacher to whom he had written a note of encouragement. In another example, we see evidence that Vonnegut corresponded with a prisoner at a correctional facility in Michigan. Kurt Vonnegut’s kindness to his fans is palpable in letters such as these. 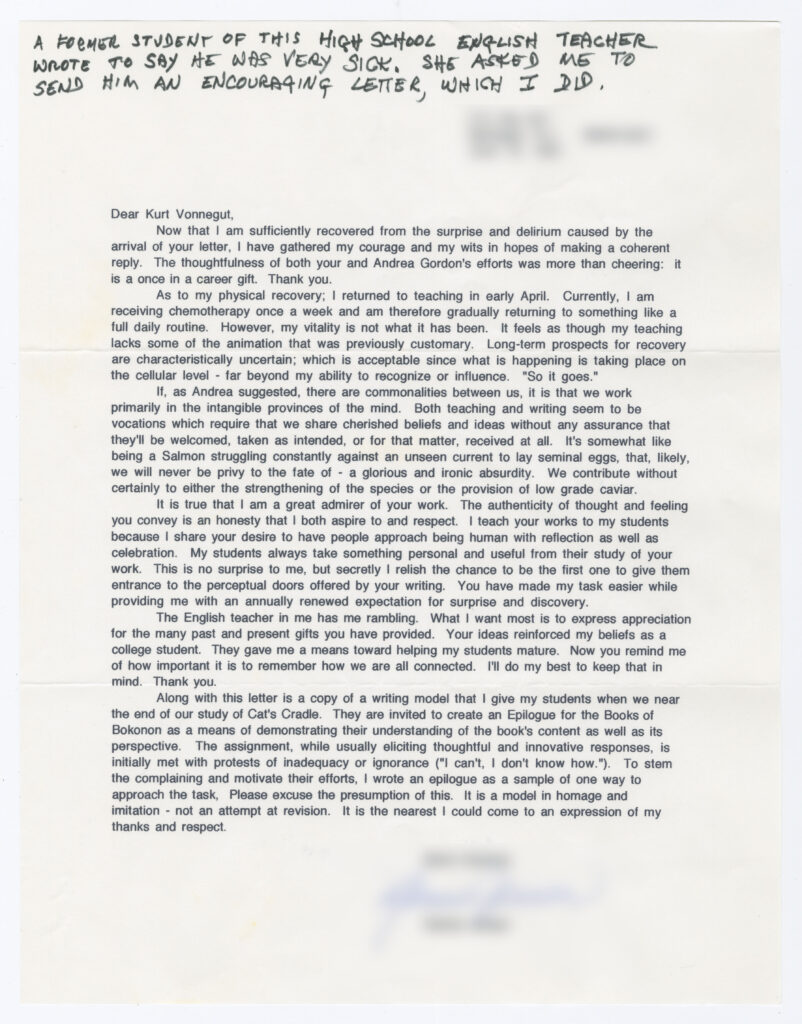 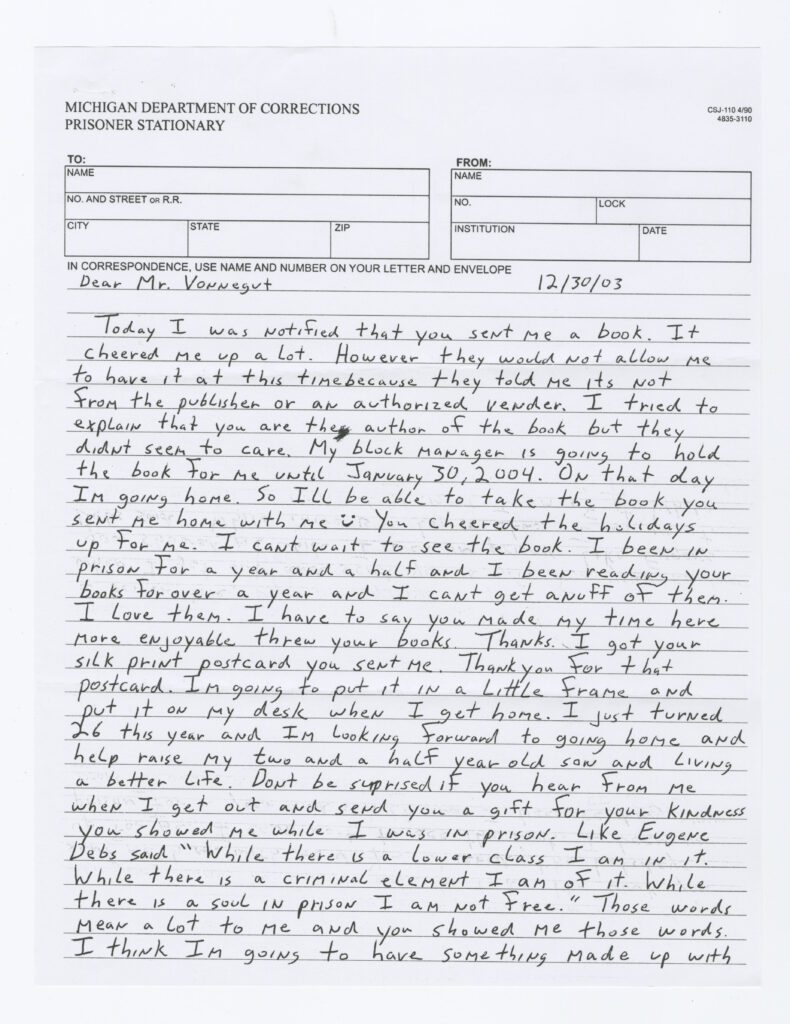 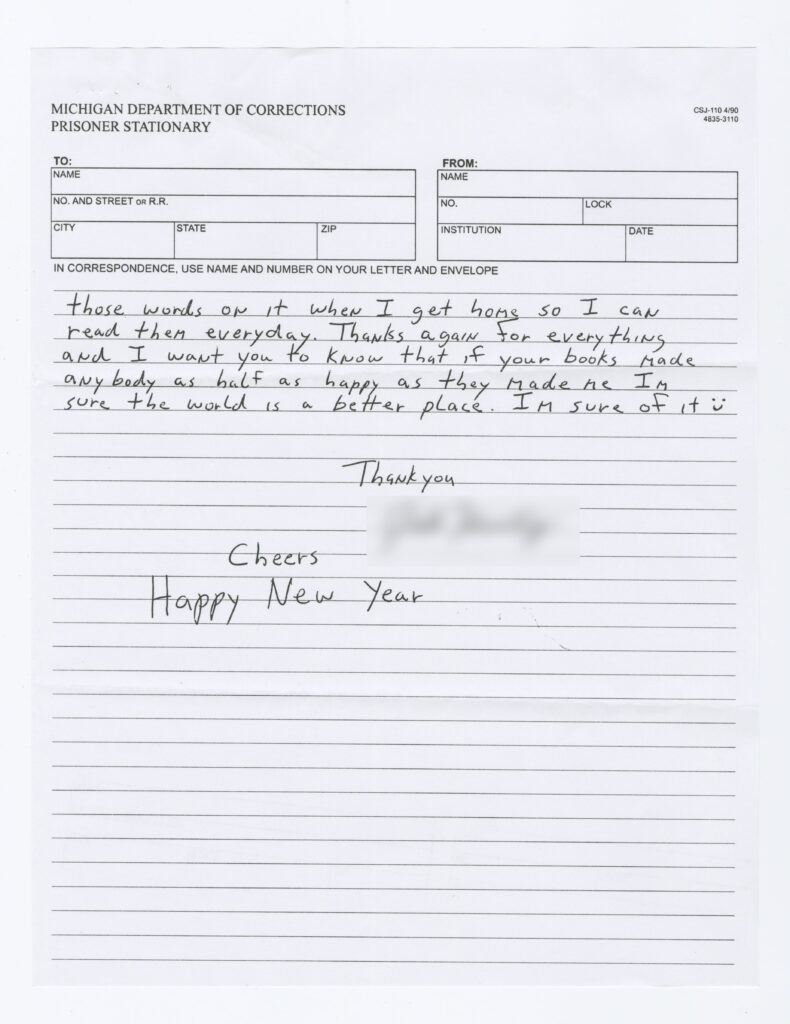