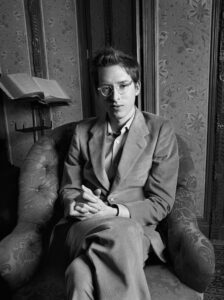 Born Wesley Wales Anderson this filmmaker from Houston, Texas has in recent years become, in my humble opinion, one of the most innovative commercial film directors of the last decade. Granted, I have only been alive just shy of two decades, but still, the man is a genius: let’s talk about why.

In the early 90s,  just as he was about to graduate from The University of Austin Film School and armed with two of the best friends a man with his aspirations could ever wish for (The Wilson brothers, Owen and Luke, with whom he collaborated on several films), Wes co-wrote, directed, and produced a short film entitled “Bottle Rocket.” 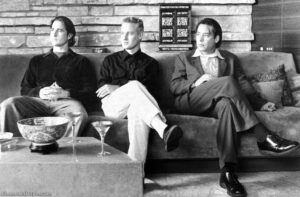 Sound familiar? It should, because the film was picked up through friends of friends by Columbia Pictures who, seeing the potential of the short and it’s award winning participation in the 1994 Sundance film festival, decided that it was worth forging into a Major Motion Picture. Of course, this is not the usual path of a novice filmmaker and his crew. Maybe you’re puzzled, as I was, by what the folks over at Columbia Pictures saw in Anderson’s short. My suggestion? Stop reading now and go watch it, or stick around because I’m about to give you my best guess. 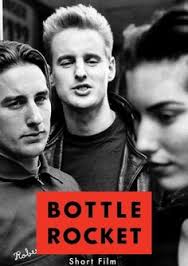 The short functions as a kind of outline for what will later become the characteristic style of a Wes Anderson film. Shot in Black and White on 16mm film, it is decidedly amateur both in budget and scope but feels professional (music glitches and odd cuts aside) in terms of the writing and camera work, and plows through a satisfactorily-developed plot in less than fourteen minutes with credits.  The short opens in black-out with a scratchy rendition of Artie Shaw’s “The Chant” and the title in big white letters (a lot like the Futura used for a Vampire Weekend album title.) This font and the music that plays behind it become cornerstones of the opening title sequences of Anderson’s later films and introduce two of the key themes that make Anderson’s films so unique: simplicity and nostalgia. In my explorations of Wes’s other films, over the course of the next few weeks, we’ll be greeted by these time and time again, and watch as they are twisted across several different subjects—but for now let’s move on. The film proper opens on Owen and Luke Wilson as two younger but slightly washed-up-looking guys in the middle of a conversation. This conversation, we find out, is an argument that feels like a classic for-as-long-as-we’ve-known-each-other-we’ve-never-agreed dispute. This functions to immediately establish the nature of the relationship between the two characters while pulling us into their world. 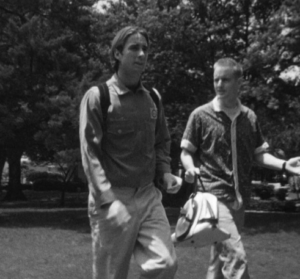 We, as viewers, have questions immediately: Who are these people? What are they fighting about? Where are they going? What’s in the bag? Anderson works quickly to answer while revealing to us some of his character’s quirks. Who are these people? Dignan and Anthony: they’re friends, I guess, though the relationship seems unhealthy and vaguely one-sided. What are they fighting about? Starsky and Hutch, who are crime fighters whose relationship resembles that of Dignan and Anthony. Where are they going? A house they are about to rob, and later this is revised to: Anthony’s parents’ house. And finally, what’s in the bag? Nothing, at first, then lots of stuff from the house including a pair of earrings Anthony bought his mom for her birthday. Whoops. Anderson also places us in media res forcing the viewer to ask and answer the questions himself or risk missing out. The employing of the writer/reader (or in this case viewer) contract is oddly literary for a shot film, and Anderson goes on in this film and in his career as a director to employ many of the common mantras that abound any fiction writing class. The two big ones that strike me in this short being “Show don’t Tell” and “Dialogue is was characters do to one another.” This opening sequence in particular being a good example of both. We are not told where Dignan and Anthony are going or why, the camera simply follows them to the house and they rob it. Likewise with whose house Dignan and Anthony are robbing, the viewer is unaware of the degree of the crime being committed or that it has any connection to either of the characters until it becomes significant with the theft of Anthony’s mother’s earrings. Show don’t tell. With the dialogue, the opening argument while as I’ve said helps to answer some of our basic questions as viewers also shows us the power structure between the two characters and, though some good acting on the part of the Wilson brothers, allows the viewer to understand how each of the characters interprets his role in the relationship. We, the viewers, are doing a lot of the major plot and context dot-connecting ourselves. This is that writer/viewer contract, a quality of good fiction writers and readers which will become another stylistic choice prominent in Anderson’s later work.

Delving into the characters themselves, this short reveals for us many of the prominent themes to be found throughout his filmography. Dignan is self-centered, solipsistic even, but driven with an almost tunnel-vision towards his goal of becoming a great thief. He is hard-headed, and because of this frequently trips over his own schemes and is easily angered by being told what to do, yet sincere in his apologies and his attempts at amends when he oversteps his bounds. Enter Anthony, his foil, who is significantly more passive, yet unflinching in his resolve to be respected as part of a duo, not a second fiddle. He functions as Dignan conscience, standing up to him when he’s being outrageous yet still wholly devoted to his cause. This devotion causes him to be a bit of a doormat, often allowing Dignan to convince him to do things he wouldn’t normally do, like using his parents’ home for the robbery or being the one who steals the wallet from the car they find with a window rolled and down parked on the side of the road. 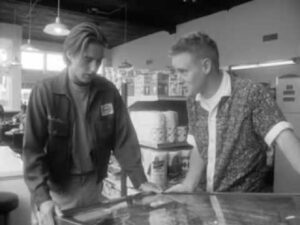 The later scene is interesting in the way it reveals further the personality types and relationship of Dignan and Anthony. It is initiated after Anthony walks away from a game pinball because he finds out that Dignan has stolen a pair of earrings from Anthony’s parents’ house that were on a list of items he had asked him not to take (the earrings were a gift, so we assume that this list contains items of value that Anthony feels are tied to some sentiment of the family, but again we’re left to decide this on our own.) This is an instance of Anthony’s will being bowled over by Dignan who, while apologetic, still plans to sell the earrings. In this scene, as they are walking down the street arguing, Dignan spots a car with the window rolled down and a wallet on the seat and, seeing the opportunity to advance as thieves, tells Anthony that he should take the wallet. Anthony is skeptical. He knows opening the car door through the window will set off the alarm, but Dignan insists and goes to wait in an ally down the street. Anthony takes the wallet, the alarm sounds, and he ends up having to run to where Dignan is waiting, frustrated about having been right. Dignan splits the money out of the wallet (only eight dollars), giving Anthony five. Here are all of the traits I was discussing earlier shown through this single scene: Dignan forcing to Anthony to do something and then framing it as an apology, assuming that giving him this opportunity and more than half the profits make what he did earlier O.K., and Anthony, even though he’s mad at Dignan, allowing himself to be influenced to do something illegal, and then letting him off the hook in the end as he recognizes that this gesture is as good of an apology as he’s going to get. 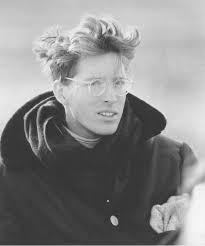 Even in this scene, which so clearly is able to lay out the traits of the characters, Anderson is an objective observer as both writer and director of the action transpiring between his characters. This level of detachment feels literary, which is what ends up distinguishing him from other American filmmakers, especially those who gain any kind of following in the popular sphere. His method is uncompromising and genius, allowing for audiences of all backgrounds in film to engage on different levels with his work and still extract from it the same personal value.  It’s this kind of exercise in sprezzatura that I will be looking at over three more of his major motion pictures: Rushmore, The Royal Tenenbaums, and Moonrise Kingdom, and I will be attempting to identify all these themes and stylistic choices to analyze their development across Anderson’s two-decades-long career as a director and screenwriter. Stay tuned.