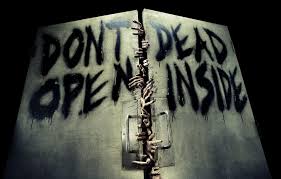 If you’ve come into Media & Reserves Services the last two nights (and of course you have), you may have noticed your friendly circulation desk staff staring like zombies* at our TV. That’s because we’ve been watching season one of The Walking Dead; the AMC post-apocalyptic drama still manages to frighten, shock, and captivate the viewer, even after multiple viewings– and with subtitles and no sound.

As you’re probably aware, the show, which starts its fifth season in October, begins at the end of the world as Georgia policeman Rick Grimes (Andrew Lincoln) awakens from  a coma to the sights and sounds of the zombie apocalypse. Civilization has collapsed as reanimated corpses mindlessly search for human flesh; a bite from a “walker” can turn you into a zombie, and the only way to off a walker is with bullet or arrow through the brain. As you can imagine, the special effects are great (and gory).

Rick, eventually reunited with his wife and son, joins up with a ragtag group of survivors, including most notably Daryl (Norman Reedus), the rugged-crossbow-wielding-redneck-my-mom-is-really-attracted-to whose general badassery sustains the show during some of its duller stretches. Some have criticized the show for its slower, somewhat meandering pace-in later seasons, but every season still delivers riveting action sequences and breathtaking plot twists. At the very least, its first season is supremely binge-watch-worthy, and the show is the highest-rated basic cable series ever.

Come see for yourself what all the hype is about at Media & Reserves Services, where you can rent seasons 1-4– that is, of course, after we’re  done watching. 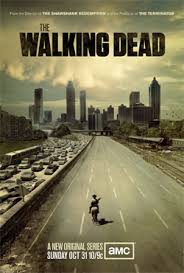 *Pun initially unintended, but we’re going with it.