I’ve ignored a lot of red flags over the course of my dating career: Not having a job so he could work on his novel. Being really, really, really into frogs. Cheating on me with my roommate (on more than one occasion). I’ve dated an embarrassing number of guys who wore wolf shirts. One thing I’ve learned, however, in my eight years of playing the dating game is to never date someone who hates Skyler White (Walt’s wife on Breaking Bad, played by the incredible Anna Gunn).

There’s a difference between dislike and the visceral, almost violent hate that’s a big turn off for me. If you don’t like Skyler because you disagree with her choices in a measured way, or you don’t like her particular character arc, that’s cool; we can talk about it over beers at the Vid. I’m talking about the level of frothing-at-the-mouth hate than many in the Bad fandom hold towards Skyler and that seemed to transfer over to Gunn, eventually inspiring her to write an article in the New York Times about the extreme animosity directed towards her character.

A common refrain among those who hate Skyler is that she’s a witch-with-a-“b” because she doesn’t immediately and unquestioningly support Walt in his drug empire-endeavors. Her responses to her husband’s profession run the gamut: she challenges him, hates him, reluctantly goes along with him, cheats on him, and eventually tries to stab him. Even when she is helping him launder money and expand his meth empire, she never fully supports him and is always disgusted by his behavior. One guy I dated disliked Skyler because Walt was so “cool” and Skyler was always trying to drag him down. Of course, Walt does have his moments of epic Heisenberg, Say-My-Name coolness, but we shouldn’t forget that by the end of the show he’s no longer the mild-mannered chemistry teacher just trying to support his family. Over the course of the show, he lies to his family, breaks the law countless times, lets Jane choke to death, regularly screws Jesse Pinkman over, poisons a kid, conspires with neo-Nazis on a series of prison hits, turns on almost everyone who ever helped him, indirectly causes the death of a family member, and, oh yeah, creates and sells a huge amount of a horrible, deadly drug. No wonder Skyler is a bit exasperated with him. Wouldn’t anyone be? 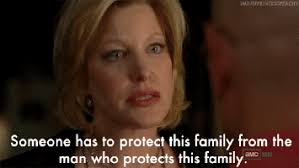 So why the intense level of hatred for Skyler? Anna Gunn hits the nail on the head when she attributes the Skyler-hate to our culture’s latent misogyny. Skyler doesn’t meekly stand by her man, and she doesn’t fit the mold of the submissive, adoring wife. Whether you agree or disagree with her choices, she makes those choices as a fully-developed character, not as the type of one-dimensional paper doll that the most virulent Bad fanboys seem to think women should be. At the end of the series, she recognizes what the audience is supposed to have recognized: that Walt is the bad guy, and that we shouldn’t be rooting for him.

So, ladies, a quick litmus test going forward: ask your date what he thinks about Skyler White. If he launches into a tirade about her witchiness-with-a-“b” perhaps its best to move on to someone whose a little less misogynistic and a little more appreciative of the stellar writing and acting that went into Skyler’s character.

And don’t worry about your newly-abandoned date; I’m sure there’s an episode of Two and a Half Men on that he can watch.

Have no idea what I’m talking about? Come check out all five seasons of Breaking Bad at IU’s Media & Reserves Services.