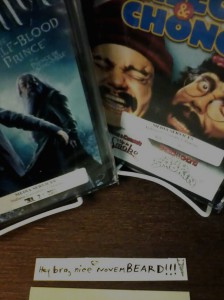 Some selections from our No Shave November shelf.

The horror flicks and campy, witchy TV series have been tucked back into the regular browsing stacks. The icy November wind has brought in a gust of new films for your perusal on the Staff Picks shelf, located across from the our front desk, centered around a few seasonal themes.  Here are some featured titles; let us know if you have any suggestions for films you’d like us to include!