“More than ever, film choices are dictated to audiences by a smaller and smaller group of major studios, deciding which films to release based on superficial metrics that leave quality out of the equation. We created Film Movement because the system of releasing independent, foreign and documentary films needed a change. We believe that the only way to change the system is to reach out to film fans directly, to make the acclaimed independent films we love available everywhere you want to see them. At its heart, Film Movement is dedicated to providing intelligent, beautiful and compelling art to ever-growing audiences who want more than the standard Hollywood fare.” 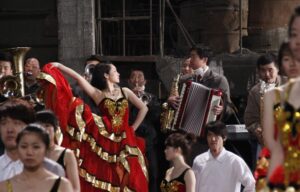 When Chen’s estranged wife reappears asking for a divorce and custody of their daughter, the musician girl decides she will live with whoever can provide her with a piano. Chen’s struggle thus begins. When efforts to borrow money and even steal a piano fail, Chen concocts a preposterous plan – he’ll make a piano from scratch! He persuades a bunch of reluctant, but loyal, misfit friends to help him forge the instrument in a derelict factory from a heap of scrap steel. Though crude in design and tune, the factory piano awaits its first and final performance from his little girl. In Mandarin with English subtitles. PN1997.2 .G3618 2011 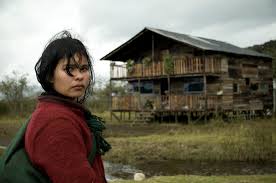 Alicia is helpless. War memories invade her mind like threatening thunder. Uprooted by the armed conflict, she tries to reshape her life in La Sirga, a dilapidated hostel on the shores of a great lake in the highlands of the Andes. There, on a swampy and murky beach, she will try to settle down until her fears and the threat of war resurface again. In Spanish with English subtitles. PN1997.2 .S5555 2013 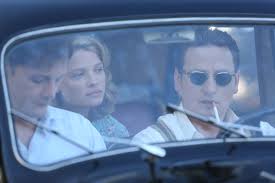 In her mid-thirties, Anne still knows practically nothing of her family’s past. After her mother’s death, Anne discovers old photos and letters that convince her to take a closer look at her parents’ life after the concentration camps of World War II. Her research reveals the existence of a mysterious uncle everyone seems intent on forgetting entirely. As she closes in on a discovery she didn’t expect, her father grows ever more ill, and may take the family secret to his grave. In a journey that stretches from post-war France and to the 1980s, Anne’s destiny intertwines with her father’s past until they form a single, unforgettable story. In French with English subtitles. PN1997.2 .P688 2014 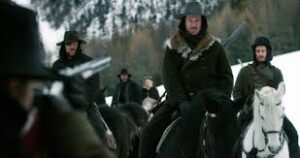 When mysterious outsider, Greider, rides into town for the winter, everyone wants him gone. Refusing to leave, Greider sparks into motion a series of deadly events in this thrilling revenge western. In German w/English subtitles. IUCAT, PN1997.2 .D3788 2015

The Iran Job: Story of an American Basketball Player in Iran (95min.). DVD, 2014. Dir: Till Schauder 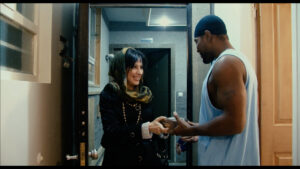 At the height of international tension between America and Iran, Kevin Sheppard, an African-American basketball player accepts an offer to play professional basketball in Iran. What begins as a desire to “explore the unknown” ends in an emotional roller-coaster as he forms an unlikely alliance with three young Iranian women against the backdrop of revolutionary social upheaval in Iran. In Farsi with English subtitles. GV885.8.I73 I73 2014 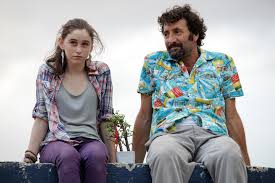 After years of living apart from her dad, Libby, an introverted yet sharp-witted teenager, is sent to live with him is Israel. Her arrival coincides with the outbreak of the second Lebanon war. Libby quickly discovers that her dad, Shaul, is an infantile eccentric, and that he is “in-between apartments” (in other words, homeless). Shaul comes up with a creative plan to put a roof over their heads. They pose as refugees from the bombarded northern region of Israel, and are taken in by a well-off family in Jerusalem. Finally in a “normal” household, Shaul and Libby begin to build their father-daughter relationship, but their false identities can’t last forever, especially as Libby unleashes teenage fury at the lies permeating her life; those she must tell now, and those she’s been fed since childhood.  In Hebrew with English subtitles. PN1997.2 .O355 2012 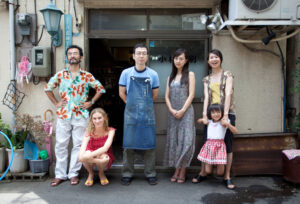 Mikio Kobayashi lives quietly with his wife, daughter, and divorced sister in downtown Tokyo, where xenophobic neighbors insist they attend community watch meetings, and the only recent excitement is the disappearance of a pet parrot. One day Kagawa appears, claiming to be the son of a financier who once helped Kobayashi’s company. Kagawa soon ingratiates himself as a live-in employee and proceeds to comically turn the Kobayashi’s monotonous life upside down with his odd behavior, unexpected visitors, and bizarre schemes. In Japanese with English subtitles. PN1997.2 .K366 2012 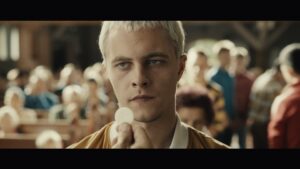 Adam is a Catholic priest who discovered his calling as a servant of God at the relatively late age of 21. He now lives in a village in rural Poland where he works with teenagers with behavioral problems who fight and yell abuse. He declines the advances of a young blonde named Ewa, saying he is already spoken for. However, celibacy is not the only reason for his rejection. Adam knows that he desires men and that his embrace of the priesthood has been a flight from his own sexuality. When he meets Lukasz, the strange and taciturn son of a simple rural family, Adam’s self-imposed abstinence becomes a heavy burden. In Polish with English subtitles. PN1997.2 .W115 2014 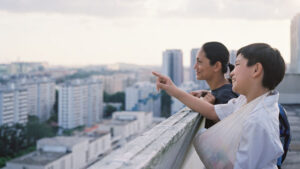 Set in Singapore during the 1997 Asian financial crisis, Ilo Ilo chronicles the day-to-day of the Lim family–troublesome grade-schooler Jiale and his overstressed parents, Teck and Hwee Leng. Comfortably middle class and with another baby on the way, they hire Teresa, a Filipino immigrant, as a live-in maid and nanny. An outsider in the family and Singapore itself, Teresa initially struggles to manage Jiale’s antics and find her footing in her new community. The two eventually form a unique bond, but just as Teresa becomes an unspoken part of the family, unforeseen circumstances in an uncertain economy will challenge the new normal yet again.  In Mandarin with English subtitles. PN1997.2 .B22 2014 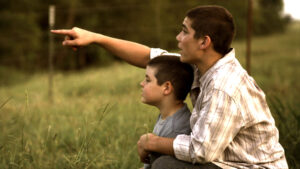 All fourteen-year-old Robbie Hendrick ever wanted was a family. Yet as another Mississippi summer begins, his wayward mother has run off again fearing a breakdown and he’s left to burn the days caring for his half-brother, Fess. As the deep days and nights pass without her return and with older brother Lucas dangerously in their lives again, Robbie must face the fact that his dream of a family may only be a dream and he might just lose the only family he’s ever had: Fess. In English. PN1997.2 .D963 2013 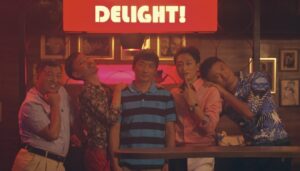 In this madcap and lighthearted comedic romp, introverted optometrist Weichung begins to question his marriage with his wife Feng, upon learning of her desire to have another baby. At his sister’s engagement party, Weichung bumps into an old friend, Stephen, a wedding photographer who, though also married, is living the high life of a younger, single gay man. When Stephen teases Weichung for his newly straightlaced lifestyle, dormant emotions are awakened in Weichung, setting him off on a quest for true romance and desire. In Mandarin with English subtitles. PN1997.2 .W5534 2014