Super hero movies have been heavily dominating the box offices as of late and have made a considerable amount of money, often breaking records within their respective release years.  Yes, they are ripe with explosions and witty banter, but does any of it mean anything? Normally, one might consider these traits and come to the conclusion of, no—that action heavy movies rarely have a redeemable plot outside of what is happening in that moment of that one movie.  If you have any ideas like this or are just curious about what Disney’s Marvel Cinematic Universe (DMCU for short) is up to, you’ll pleased to know that there is a lot yet to be seen. 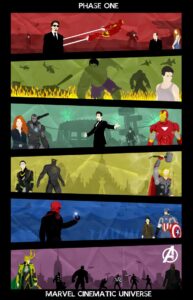 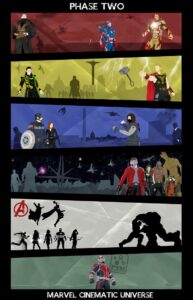 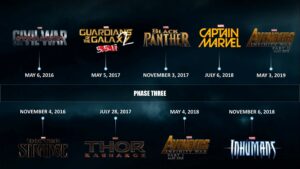 DMCU is made up of several ‘phases’ that started as far back as the first Iron Man (2008) and is still going strong with the newest upcoming feature being Captain America: Civil War (2016).  There are three phases which are made up of specific Marvel movies seen below.

You may be wondering: “Why all the phases and Movies?” or “Wow I missed a lot a movies!” And possibly, “Where’s Deadpool?”

Do not fret, if you are behind on movies, you can find a great many of them at the Wells Media Center. As for the phases, think of them as a convenient way to organize over twenty movies created over the expanse of eighteen years.  Whatsmore, each movie isn’t mutually exclusive. Characters pop up within other character’s movies whether it be through a well-placed possession, end of credits cameo or in movie cameo.  More often than not, they are there to lay some ground information for the DMCU projects. And if you’re wondering why Deadpool isn’t here, that’s because he isn’t part of the DCMU but rather a character currently owned by FOX.

As you can see, we are now in phase three with Captain America: Civil War coming out this May.  This movie is sparking quite a bit of debate as fans are wondering whether or not Disney will adhere to the comic this movie is based on.  For those who don’t know, the premises of this movie is the idea that superheroes should be held accountable for their actions regardless of their identities through the Superhero Registration Act.  Lines are drawn a 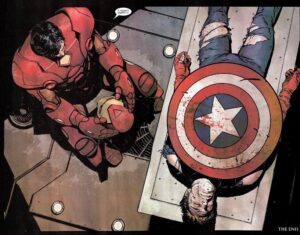 mongst the established characters within the movies so far and it only escalates from there with the ending result of a dead Captain America.  Fans wonder if Disney will end it this way as the comic did or go their own way, so we wait.