As some readers may remember, back in early February I wrote about attempting the Doug Loves Movies Challenge by watching 366 movies this year (being a leap year), of course the pace to ideally be watching one film per day.  At the time of my last post, I was a few behind this pace, but I really kicked it into high gear in March and am currently coming out ahead of schedule.  This entry like my last will highlight some of my favorite movies that I’ve watched as part of the challenge in the last 2 months, all of which can be checked out right here at Media Services! 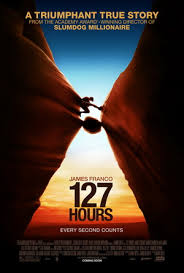 James Franco has become an interesting figure in Hollywood in the last few years to say the least.  Between his growing list of acting credits, his seemingly everlasting academic career, and his disastrous stint as Oscfars co-host with Anne Hathaway, it can be puzzling to know where his head is at times.  Knowing this, and having only seen him in less serious roles like Harry Osborn in the Spider-Man trilogy and as himself in This Is The End, I was curious to see his critically-acclaimed performance in 127 Hours.  Franco stars as Aron Ralston, an adrenaline-seeker who on one of his regular climbing excursions finds himself between a rock and a hard place – quite literally (a lame joke, I know, but it’s the truth!)  The film largely follows Ralson’s struggle to preserve his precious few resources, including his sanity, long enough to survive.  Though there are some notable appearances besides Franco, like a young Kate Mara, Amber Tamblyn, and Lizzy Caplan, the majority of the film relies on the performance of one person (Franco).  While films that rely so heavily on one person can often swing and miss, the musings and struggles of Franco keep you engaged from the very start and never let go.  After hearing the award-season hype of this film years ago and only seeing it now, I can honestly say it lived up to and exceeded expectations.  If you’re a fan of Franco, but would like to see his serious acting chops, I suggest renting this film today. 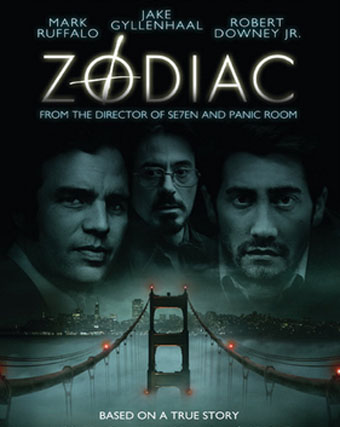 In the last couple of years, I’ve learned something about myself.  I am a HUGE Jake Gyllenhaal fan.  Now, I know what you’re thinking.  “There’s no way I can take the dude from Bubble Boy seriously.”  To that person I say watch Prisoners, End of Watch, and Nightcrawler and get back to me (all of which are phenomenal, by the way, and I highly recommend them).  Given this fact, and seeing an ensemble of him, Mark Ruffalo, and Robert Downey Jr. on the Browsing shelf here in the movie Zodiac, I knew I couldn’t go wrong.  Zodiac follows the case of, well, the Zodiac Killer, a serial murderer who ran rampant in Northern California in the late 60s and early 70s.  The unknown killer sent encrypted letters to Paul Avery (Downey Jr.) and the staff at the San Francisco Chronicle newspaper to toy with the media and the criminal forces that were after him.  Robert Graysmith (Gyllenhaal), a cartoonist at the Chronicle became obsessed with these coded letters and catching the killer himself.  After years of trying to piece evidence together and annoying Avery with his seemingly crackpot theories, he seeks out Inspector David Toschi (Ruffalo) himself to finally catch the Zodiac.  Even knowing now that the case of the Zodaic was never completely solved, the directing style of David Fincher kept me at the edge of my seat the whole time.  If you’re a fan of some of Fincher’s other films like Gone Girl or Fight Club, or just love a good crime thriller, this movie is a must-watch. 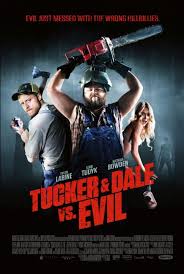 Finally, I’d like to end this article on a lighter note.  Based on the above picture that may not make sense, but hear me out.  Tucker & Dale Vs. Evil may look like your typical forest slasher flick, but in reality it is a hilarious send-up of that very genre.  This film stars Alan Tudyk (Tucker) and Tyler Labine (Dale) as two redneck friends who buy a “vacation home” deep in the woods of West Virginia, which is a fixer-upper to say the least.  When a group of college spring breakers’ camping trip goes awry and a string of hilariously unfortunate accidents leave the college group dwindling by the minute, Tucker and Dale must fight to clear their name and, in Dale’s case, fight for his dream girl.  If you enjoy spoof movies like Shaun of the Dead and Hot Fuzz (which I mentioned in my last post), and have an affection for the slasher genre, you should definitely check out Tucker & Dale Vs. Evil at Media Services.

I implore you all to do as I am and fully take advantage of the vast selection of quality films that Media Services has to offer.  You’re probably in the Wells Library anyway, so come on over to the East Tower and visit us!  And wish me luck in the challenge!  Ninety-eight films down, 268 to go! (oh boy…)